US Presidential Elections 2020 Live Updates: Millions of Americans will head to the poll stations on Election day, adding their ballots to the more than 99 million already cast by early voters.

New Delhi | Jagran News Desk: Election day is finally here. Polling stations in the eastern states of New York, New Jersey, Virginia, Connecticut and Maine opened at 6:00 am (1100 GMT). Millions of Americans will head to the polls in person on Tuesday, adding their ballots to the more than 99 million already cast by early voters, setting the stage for the highest participation rate in over a century. It is expected to be a close contest between incumbent President Donald Trump and Democrat nominee Joe Biden. That's especially true this year as the U.S. confronts crises and is choosing between two candidates with very different visions for the future. The country is more divided and angry than at any time since the Vietnam War era of the 1970s -- and fears that Trump could dispute the result of the election are only fueling those tensions.

Stay tuned for the Highlights of US presidential elections

12:30 am Former President Barack Obama urges voters to support Joe and Kamala for making the US a better country.

For eight years, Joe was the last one in the room whenever I faced a big decision. He made me a better president. And today, we have the chance to elect Joe and Kamala to build our country back better. But it’s going to take every single one of us. Vote: https://t.co/XdZz4dh82T https://t.co/Tg95bMztqT

Bill and Hillary Clinton have cast their votes. Soon after Bill said in a tweet - "Hillary and I just proudly cast our ballots for Joe Biden and Kamala Harris. They will work tirelessly to heal our divisions and build a better future for all of us. If you haven’t done so already, vote today!"

Hillary and I just proudly cast our ballots for Joe Biden and Kamala Harris. They will work tirelessly to heal our divisions and build a better future for all of us. If you haven’t done so already, vote today! pic.twitter.com/49fSwmlbst

US District Judge Emmet Sullivan has ordered the US Postal Service to carry out a sweep of some processing facilities to make sure no ballots have been held up, the Guardian reports. Any hold-ups are to be immediately sent out for delivery.

After Donald Trump Jr shared a map clubbing India with Mexico and China, Congress leader Shashi Tharoor said: The price of Namo’s bromance: Kashmir & the NorthEast cut off from the rest of India, &the whole “filthy" place relegated by Don Jr to the realm of hostiles, along with China&Mexico. So much for the crores spent on obsequious serenading stadium events!"

10:20 pm Voters who have tested positive for the virus can still cast their ballots in person, according to guidance issued by the US Centers for Disease Control and Prevention (CDC). They should let election officials know about their diagnosis upon arrival at the polling station and take the following steps:

Wash hands or use hand sanitiser before and after voting

Polling machines are up and running in Spalding County, Georgia, south of Atlanta, after facing technical issues, CNN reported

US first lady Melania Trump has cast her vote during the 2020 presidential election at Morton and Barbara Mandel Recreation Center in Palm Beach, Florida. 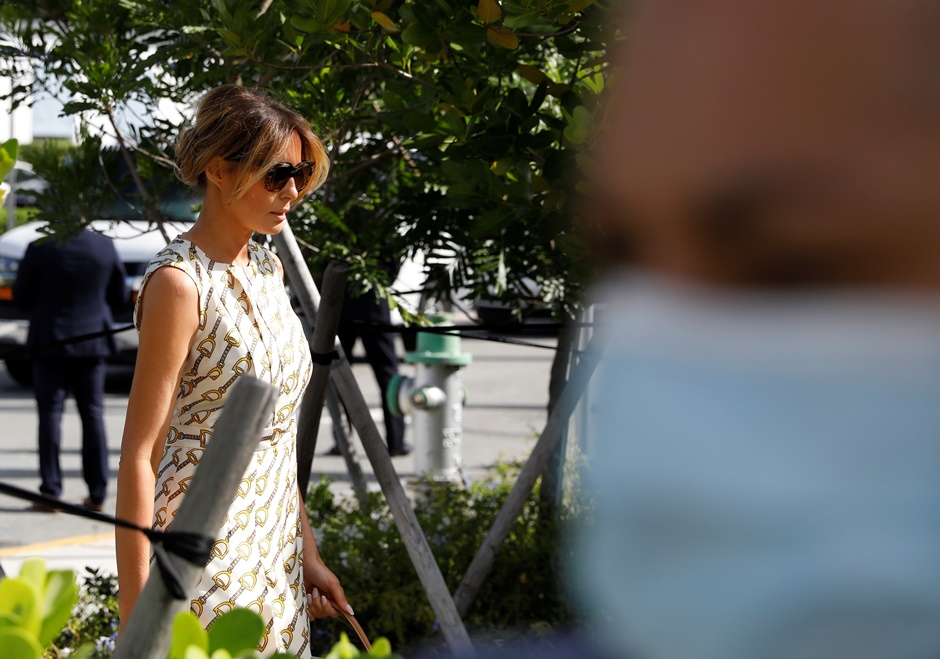 8:30 pm Jill Biden is the latest member of the Democratic campaigning machine to push out a video imploring people to vote today.

This is it. Over the next few hours, we will decide our future. It's up to us.

If you haven't voted yet, go to https://t.co/z26WaqpGLB to look up your polling place and polling hours. pic.twitter.com/DLshcM7JPR

8:00 pm Donald Trump shared a video of himself dancing, set to the Village People song YMCA, with the caption: “VOTE! VOTE! VOTE!”

7:30 pm Joe Biden talks about 'restoring decency to the White House' at a campaign stop in Scranton.

Democrat presidential nominee speaks at a small event, talking about “restoring decency to the White House”, and was greeted by supporters holding up signs saying “Scranton loves Joe!”

Hundreds of men and women marched, clad in T-shirts supporting US President Donald Trump or pink fabric dresses bearing the image of Jesus, as they waved American flags, Republican presidential campaign signs, and even a few Nigerian flags.

Hundreds of men and women marched, clad in T-shirts supporting Donald Trump, as they waved American flags, Republican presidential campaign signs, and even a few Nigerian flags. The rally, after all, was in a city in eastern Nigeria https://t.co/jEZeqRfhJS pic.twitter.com/1Cz34Wj3Hl

6:30 pm: Trump Says He Feels 'Very Good' about his chances

President Donald Trump said he felt good about his chances for victory as the US election 2020 opened, predicting that he would register big victories in key states such as Florida and Arizona.

An Asian American Republican group has officially endorsed Joe Biden, encouraging its thousands of members to vote for the Democrat nominee on the election day

5:20 pm: Donald Trump appeals to voters to come out as if their 'freedoms depend on it" and says it's contest between 'Freedom and Marxism'.

Vote like your freedoms depend on it... because they do! This election is Freedom vs Marxism. Choose wisely and vote Trump.

5:10 pm: Joe Biden has just posted an upbeat video urging people to get out and vote, soundtracked by Too Many Zooz tune Warriors.

It all comes down to this.

5:00 pm Polling stations in the eastern states of New York, New Jersey, Virginia, Connecticut and Maine opened at 6:00 am.

Election Day is here, and polling places across the country are starting to open. Mask up and find your polling place at https://t.co/VbrfuqVy9P.

Campaign rallies might be over, but the two leading presidential candidates are continuing to eye for votes through social media.