US Election Results 2020: While Joe Biden has expressed confidence over his win, the Trump campaign said that it filed lawsuits on Wednesday in Pennsylvania and Michigan.

Washington (USA) | Jagran News Desk: With Joe Biden inching towards the 270 majority-mark, the Trump camp is planning to take legal action in Nevada and Arizona. Trump has already announced lawsuits in Michigan, Pennsylvania and Georgia and demanded a recount in Wisconsin. "The damage has already been done to the integrity of our system, and to the Presidential Election itself," Trump said while alleging "without proof or explanation that secretly dumped ballots" had been added in Michigan.

"But I also know this as well: to make progress we have to stop treating our opponents as enemies. We are not enemies. What brings us together as Americans is so much stronger than anything that can tear us apart," he said.

Here are the highlights on US Presidential Election Results 2020:

10:30 pm: In the first lawsuit put forth by the Trump campaign over alleged late ballots being counted in Georgia, the judge has DENIED the campaign's petition and dismissed the case.

President Donald Trump threatened more legal challenges on Thursday over results from Tuesday’s presidential election in a handful of states, claiming without any evidence that voter fraud has been committed in places where Democrat Joe Biden appears to have won. “All of the recent Biden claimed States will be legally challenged by us for Voter Fraud and State Election Fraud,” Trump wrote in a tweet, without listing specific states or examples of alleged fraud.

9:45 pm: Republican Senator David Perdue's campaign releases statement as it becomes likely that his reelection will proceed to January runoff

Republican Sen. David Perdue campaign manager says in a statement that "if overtime is required when all of the votes have been counted, we're ready, and we will win." pic.twitter.com/NCYFFEnJkZ

Joe Biden’s campaign is expressing optimism at the ultimate result of the election but warning supporters to “stay patient and stay calm” as vote counting continues. Biden campaign manager Jen O’Malley Dillon said Thursday on a briefing call with reporters that “the story of today is going to be a very positive story” for their campaign, but cautioned that as the counting continues, “we need to allow it to get done and get done well.”

8:45 pm: Donald Trump backers converge on vote centers in Michigan, Arizona Dozens of angry supporters of President Donald Trump converged on vote-counting centers in Detroit and Phoenix as the returns went against him Wednesday in the two key states,

8:15 pm: With Joe Biden edging closer to unseating him from the White House, President Donald Trump says he wants to put a halt to vote counting.

The extraordinary statement by an incumbent president to voice support for ceasing the count of legally cast votes came in a tweet, saying only: “STOP THE COUNT!”

The head of an international observer mission to the US elections accused Donald Trump on Thursday of a "gross abuse of office" after the president alleged he was being cheated and demanded that vote counting be halted, reported news agency AFP. "

The head of an international observer mission to the US elections accused Donald Trump on Thursday of a "gross abuse of office" after the president alleged he was being cheated and demanded that vote counting be halted, AFP reports.

6:45 pm: Trump Supporters Protest Outside Arizona Vote Center A crowd of Donald Trump supporters, some armed with rifles and handguns, gathered outside an election center in Arizona on Wednesday night after unsubstantiated rumors that votes for the Republican president were deliberately not being counted, reported news agency Reuters.

Mauree Turner won her race for Oklahoma state House for District 88 on Tuesday, becoming the first nonbinary state legislator in US history and first Muslim lawmaker in Oklahoma, CNN reports

17:45 pm: White House, Air Force One, The Beast and a whopping Rs 3 crore salary: Perks of being the US President

16:35 pm: The race has tightened once again in the US as Donald Trump has come close to Joe Biden in Arizona.

15:53 pm: US Elections 2020: As Joe Biden inches closer to victory, here's a look at his stance on CAA, Kashmir, Pakistan and China

15:11 pm: A NBC report suggests that Joe Biden has lost the support of blacks in the US. The report claims that the number of people who voted for Barack Obama "is far more than what Biden has clocked this time".

14:44 pm: Meanwhile, it is noteworthy to mentiona that to reach the magic figure of 270 to claim victory, Trump needs to win all of Georgia, Pennsylvania, North Carolina and Nevada.

14:33 pm: US Elections 2020: If elected to power, Joe Biden will become the oldest President of America

14:03 pm: The US election website suggest that it will declare the results of Philadelphia by tonight.

13:21 pm: According to New York Times, Georgia is becoming a major battleground in Trump and Biden. Currenty, Trump has a narrow lead of 49.6 per cent over Biden's 49.1 per cent.

11:58 am: Meanwhile, supporters of Donald Trump are out on roads in several states, claiming fraud in election. Reports suggest that the nearly 50 people have been arrested in New York while 10 in Portland. 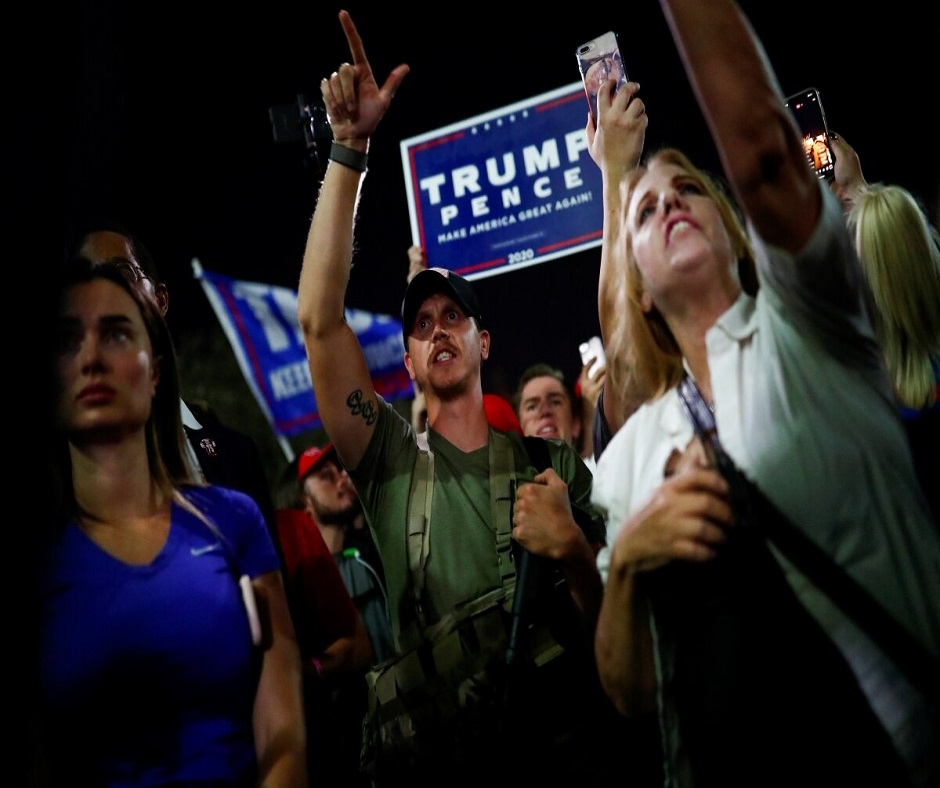 11:24 am: US Presidential Elections 2020: List of states which are still counting votes and when will it be completed

11:02 am: Our lawyers have asked for “meaningful access”, but what good does that do? The damage has already been done to the integrity of our system, and to the Presidential Election itself. This is what should be discussed!: Donald Trump

10:38 am: According to a report in India Today, security agencies have downplayed the claims of cyber threat in US elections, saying "there no apparent signs of any malicious cyber activity".

9:58 am: Meanwhile, media reports suggest that Donald Trump is considering taking legal action in Arizona and Nevada as votes are still being counted.

9:18 am: Biden, meanwhile, has vowed Wednesday that the US would rejoin the Paris climate accord on his first day in the White House, hours after the withdrawal ordered by Donald Trump took effect.

VIDEO: Protesters gather outside the New York Public Library to demand that all votes be counted as the nation awaits the final results of the US electionhttps://t.co/yzYgDdXIBJ pic.twitter.com/8plftESojL

8:28 am: Biden is only 6 seats away from the majority mark and seems confident of his victory. The Democratic candidate has won several key states in the country.

8:04 am: Posters wishing success for US Vice Presidential candidate Kamala Harris seen outside her native village in Tamil Nadu's Thulasendrapuram. 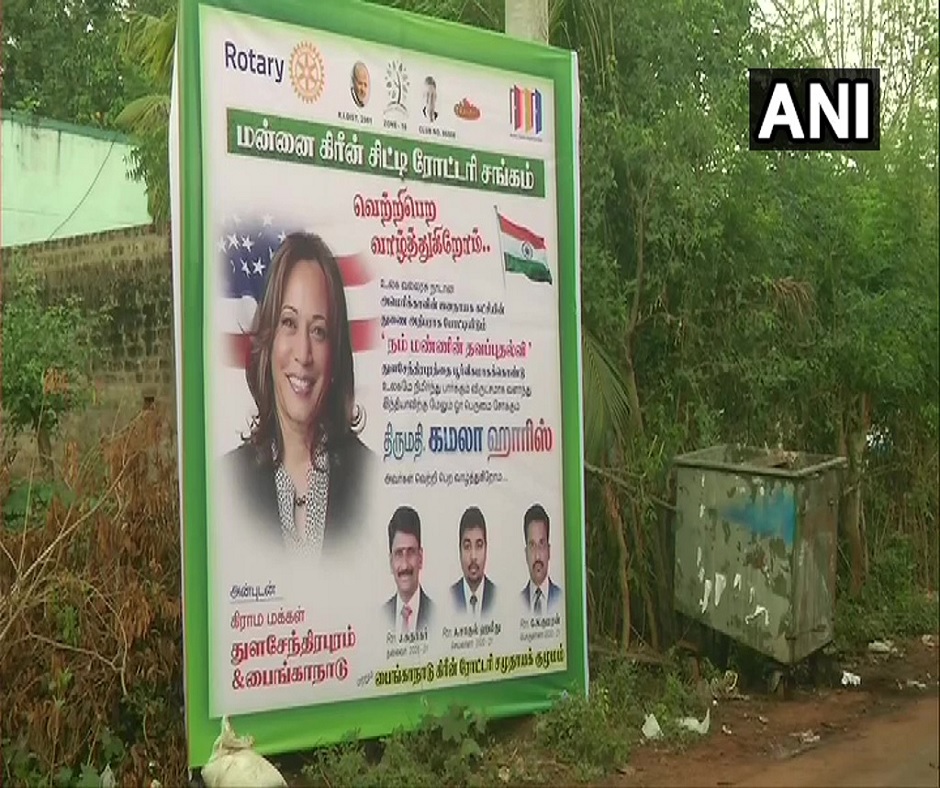 7:38 am: The Trump camp has also filed lawsuits in Georgia to stop vote counting.

7:37 am: The Trump camp, meanwhile, has said that it has filed lawsuits in Pennsylvania and Michigan.

7:30 am: Biden has also won the important seats in Wisconsin and Michigan.

7:27 am: Joe Biden has expressed confidence that he will win the US elections as he has "enough states to reach the magic number of 270 electoral college votes".