The IFCN is a large network of 79 different organizations from across the world that includes AFP, Reuters, and The Washington Post.

New Delhi | Jagran News Desk: In a proud moment for all the fact-checkers across the the globe, the International Fact-Checking Network has been nominated for the Nobel Peace Prize 2021 by Trine Skei Grande, former Norwegian Minister of Education and of Culture and Gender Equality.

Taking to Twitter, Trine Skei Grande, a former leader of Norway's Liberal Party, announced that, "we live in a time when fighting lies is so important that @JoeBiden mentioned it in his speech yesterday". "This year, I have nominated fact-checkers for the Nobel Peace Prize. They need our support," Skei Grande further added.

US President Joe Biden in his inaugural speech on Wednesday said that there was an attack on democracy and on truth and citizens and leaders need to come forward to perform their duty to defend the truth and to defeat the lies. 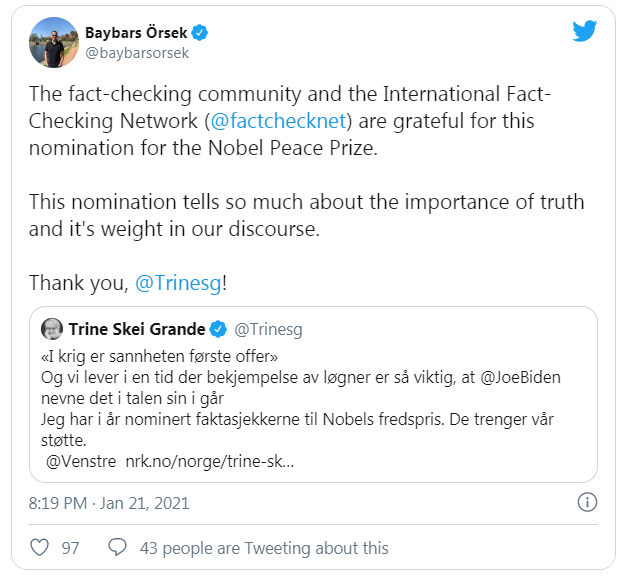 The IFCN is a large network of 79 different organizations from across the world that includes AFP, Reuters, and The Washington Post. It was founded in 2015 by the Florida-based non-profit journalism school and research organization Poynter Institute of Mass Studies.

IFCN further did great work in 2020 during the COVID-19 pandemic in which they created a Coronavirus Facts Alliance, in which, they brought together over 100 fact-checkers from over 70 countries.

Also Read
'Indian-Americans taking over US': Joe Biden as 55 Indians appointed at..

This was followed by the declaration of misinformation around the disease as an infodemic by the World Health Organisation. Last year, the Nobel Peace Prize was awarded to World Food Programme (WFP). This year the winner will be announced in early October.