The video has also left two Italians horrified with the monstrosity of women while making Pasta. In the video shared by an Instagram profile named lionfieldmusic woman makes pasta with Blueberries and milk.

New Delhi | Jagran Trending Desk: Pasta is that Italian delicacy that is loved across the world. However, a recent in-trend experiment with food has fallen upon this dish too. A woman in a video gone viral makes pasta with dried blueberries and milk and netizens are left appalled.

The video has also left two Italians horrified with the monstrosity of women while making Pasta. In the video shared by an Instagram profile named lionfieldmusic and captioned, " Would you try it," a woman can be seen making spaghetti pasta.

She uses the uncooked spaghetti pasta as skewers and pierces through them dried blueberries. She then adds them to a pan and boils them.She finishes off with some milk and eats it off.

While the two Italians were shouting for the woman to stop and said, " What!!! Just Give Up." The two Italian friends have been identified as Emiliano and Matteo and the video posted on January 1st has garnered 72, 320K likes till now and comments in thousands.

Apart from Emiliano and Matteo, other netizens were also irked about the pasta as they flooded the comment sections with many hilarious remarks. “You all knew it was gonna be bad once the spaghetti was laid down that way,” one of the users wrote. “Just. Why? How did the idea come about and why would one actually do it ,” another user wrote. 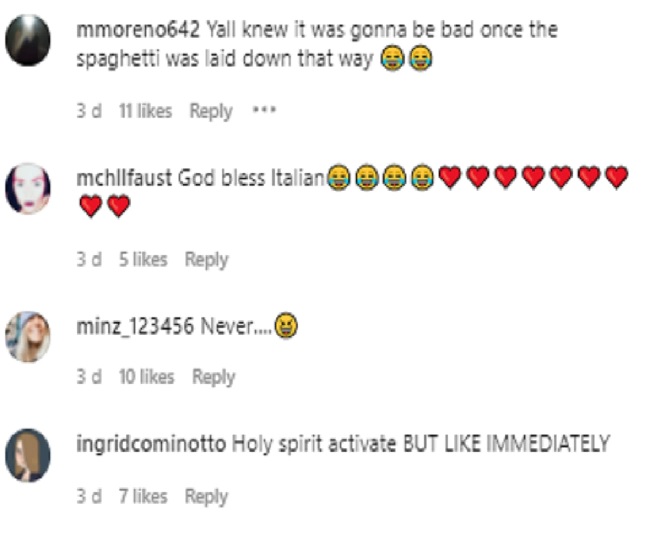 While many wanted God to save Italians from this dish and asked to 'God Bless Italians' and other wrote, "Holy Spirit activate BUT LIKE IMMEDIATELY".

What are your thought about this absurd concoction? Do share.