The reason behind the massive search of the word was the T-shirt wore by Rhea when she appeared at the NCB office earlier in the day.

Soon after Rhea’s arrest by the probe agency, people started searching for the actress and her arrest on Google. But at the same time, several others also searched for the term ‘patriarchy’.

The reason behind the massive search of the word was the T-shirt wore by Rhea when she appeared at the NCB office earlier in the day.

“Roses are red, violets are blue, Let’s smash patriarchy, Me and you,” read the caption on her T-shift which grabbed the attention of social media users.

Clad in black, Rhea reached the NCB office at Ballard Estate around 10.30 am on Tuesday and was also seen carrying a bag with her, while entering the office.

Searches for the meaning of patriarchy instantly spiked on social media along with Rhea Chakraborty and these searches primarily came from states like Maharashtra, Goa, Delhi and Uttarakhand. 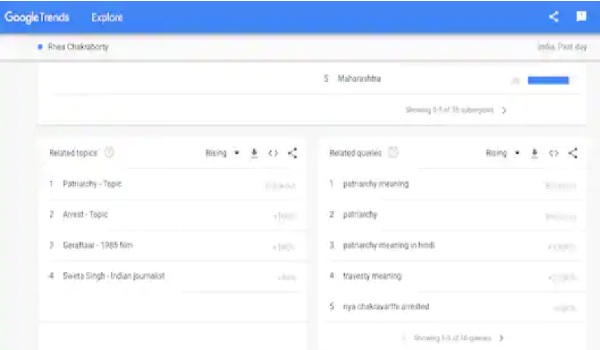 Patriarchy, according to the dictionary, is "a system of society or government in which the father or eldest male is head of the family and descent is reckoned through the male line." It refers to systemic abuse that denies women power or leverage by denying them rights to property, equal wages or, as is the case for most women in India, even the agency to decide for herself.

A Twitter user by the name of Anurag Sinha shared the pictures of the actress as she came out of her car at the NCB office in Mumbai this morning. "Rhea reached the NCB office with a message on her clothes. Decode her arrogant message. #WorldUnitedForSSRJustice," the user wrote.

Let me get this straight. You're saying that a system which for centuries literally thought it was ok to throw women into fires, take their labor at home for free, take their bodies without consent, not allow them to work, not promote them at work, harass them at work, https://t.co/8bpVVcNfvh

Rhea, who has been names as the accused in the Sushant Singh Rajput death case, has been at the centre of the investigation carried out by three central probe agencies - CBI, NCB and Enforcement Directorate.

The 28-year-old girlfriend of Sushant Singh Rajput had in recent TV interviews denied that she consumed drugs. She, however, recently claimed that it was Sushant who consumed drugs.