'Potato-shaped' planet, about 1.8k light-years from solar system, discovered | All you need to know

WASP-103b is the exoplanet with the highest expected deformation signature in its transit light curve and one of the shortest expected spiral-in times.

New Delhi | Jagran Trending Desk: In a first, Astronomers have announced a planet that exists in a rather unusual shape of a Potato. A planet that resembles to shape of a potato was discovered a few years ago. Planet named WASP-103b is located in the constellation “Hercules”, at a distance of about 1,800 light-years from the solar system.

According to news agency AFP, WASP-103b is a close distance away from its star WASP-103, which is about 50 times closer to its sun than Earth is to its sun, to the extent that the planet’s cycle takes only 22 hours, while the Earth’s cycle takes 365 days.

Using the European Space Agency’s CHEOPS mission and data from NASA’s Hubble and Spitzer space telescopes, the team pieced together the weird shape of WASP-103b. They initially discovered this unusually shaped planet back in 2014.

1/ Not all planets are spheres!

The deformation – caused by strong tidal forces between the planet and its host star – was spotted by #Cheops 👉https://t.co/2gJ7JB70JT pic.twitter.com/23cXlaMtyv

“WASP-103b is the exoplanet with the highest expected deformation signature in its transit light curve and one of the shortest expected spiral-in times,” a study published in the Astronomy and Astrophysics journal said.

The study added that measuring the tidal deformation of the planet would allow it to estimate the second-degree fluid Love number and gain insight into the internal structure of WASP-103. 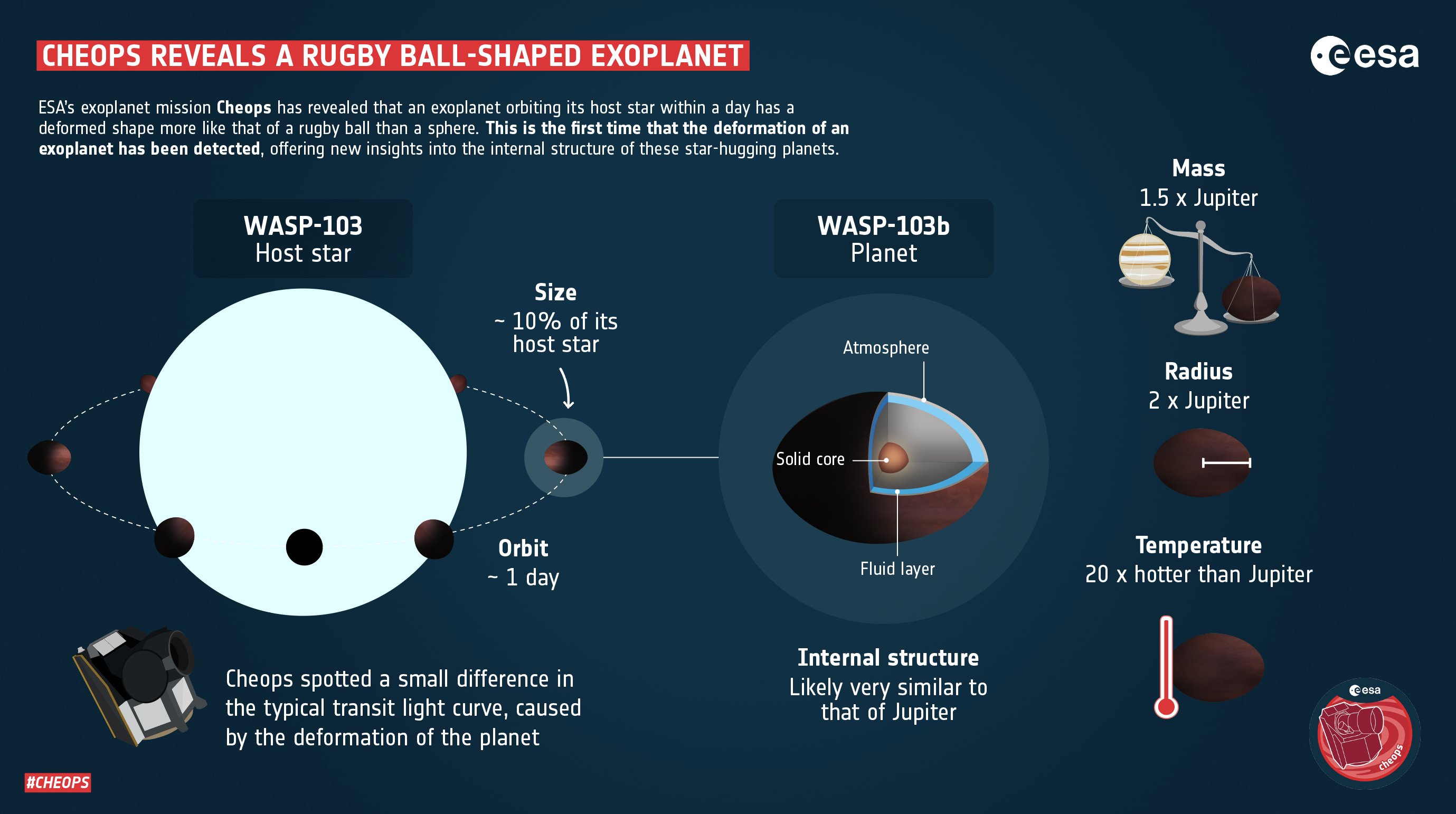 The Love number, a dimensionless parameter that measures the rigidity of a planetary body, shows WASP-103b is similar to Jupiter, the study said.

“This will allow to constrain the internal structure and composition of WASP-103b, which could provide clues on the inflation of hot Jupiters,” it added.

AFP further reported that scientists are assuming that WASP-103b has a solid core, covered with a liquid layer, and surrounded by a gaseous atmosphere - just like Jupiter.

Susanna Barros, an astrophysicist at the University of Porto, Portugal pointed out that if this planet is 1.5 times more massive than Jupiter, then its radius is twice as large. Barros predicts that WASP-103b will be very puffy because of the hotness of its star along with other mechanisms.

Also, the report further stated that James Webb Space Telescope could look at WASP-103b and similar tidally-stressed planets to better understand them.