In a bizarre incident, passenger travelling from a premium train had to pay Rs 70 for a cup of tea. Read to know more here.

Train journeys are everyone's favourite and the reason is pleasant window view, comfortable journey, and cheap food. However, the myth that people had that train's food and beverages are cheap has now been busted. In a shocking incident, a passenger travelling from Shatabadi express was charged Rs 70 for a cup of tea during the train journey.

Yes, you read that right! Rs 70 for just a cup of tea. When the passenger asked for the bill, he witnessed that he had to pay a service charge of Rs 50 for a cup of Rs 20. As proof, the passenger took the picture of the bill and shared the photo on Twitter. As soon as the picture was shared, it went viral online with numerous re-tweets. 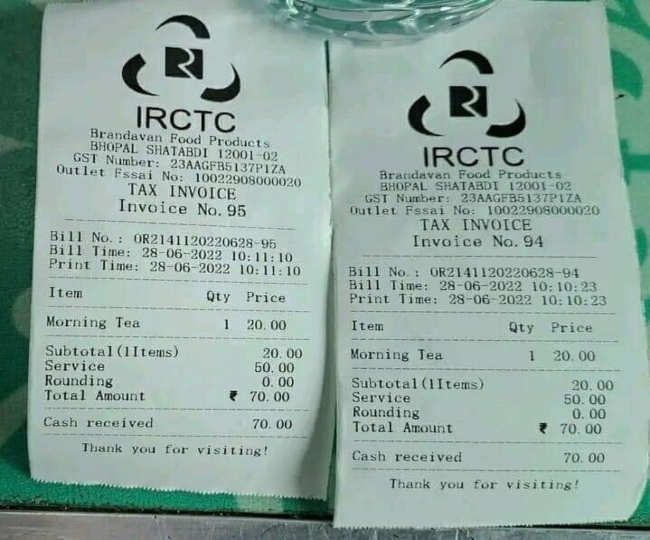 The Indian railway faced massive backlash over the issue and has now given the reason for the charges. The passenger boarded the Bhopal Shatabdi and was travelling from Delhi to Bhopal. Two pictures were shared containing two tax invoices of one tea each. “GST of Rs 50 on tea worth Rs 20. Altogether, a tea is worth Rs 70. Isn't it an amazing loot?”

In order to clarify the matter, the Indian Railways' statement stated no extra money was charged from the customer. Back in 2018, Indian Railways issued a notice that stated that if a passenger on a premium train including Shatabdi and Rajdhani did not book the meal, then they have to pay a service charge of Rs 50 for ordering tea, coffee, or food during the journey. Even if it is just a cup of tea.

Meanwhile, several such complaints were made by the passengers about the high charges of IRCTC, who provides catering service on the railways. However, the catering agency turned a blind eye to the complaints.