Optical Illusion: Can You Spot Human Faces In This Picture Of Chameleon?

The picture resembles the faces of two women which can only be seen if you look at the picture with keen observation.

Have you ever tried to look at a picture and found something else than what it appeared at the first glance? You might have come across such mind-boggling pictures while scrolling through social media. These images are optical illusions that leave the internet surprised and confused, both at the same time.

These pictures are a lot more than what they appear. While some of these claim to have a hidden meaning, many of these mind-teasers are just made to trick your brain. However, it still creates a sensation on social media and it's exciting to solve these puzzles. Here is a similar picture.

The optical illusion is designed by Italian artist Johannes Stoetter and it shows a chameleon. However, this is not as simple as it looks. The picture also resembles the faces of two women which can only be seen if you look at the picture with keen observation.

You need to identify the faces in 9 seconds. Let's take a look at the picture. 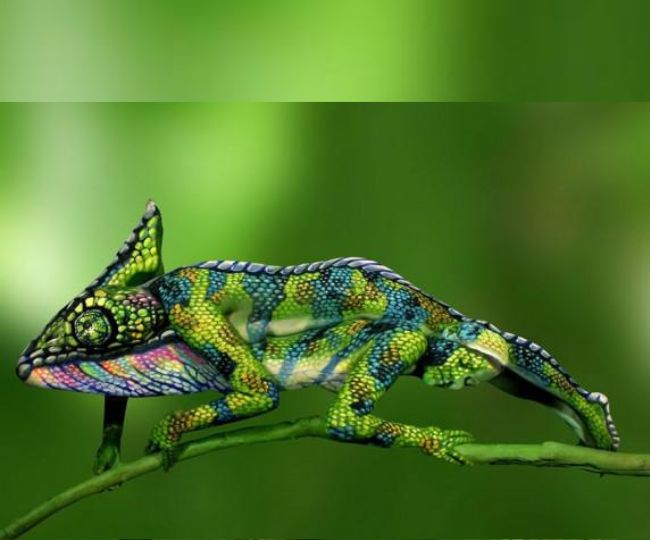 Can you spot the hidden faces? Don't worry if you fail at your attempt. We have got some hints for you. Check it.

Look carefully at the chameleon’s hind legs that are folded in opposite directions. You can use the clue in solving the illusion.

If it's still difficult for you, we have some more hints. Focus on the tail of the chameleon. You will notice a bulge at the tail. The bulge resembles a human face. Now, it's time to find the second face. Pay careful attention to the eye of the chameleon. Though this is challenging, with meticulous observation, you will find the face beneath the chameleon’s eye.

A similar optical illusion that was shared some time ago, grabbed many eyeballs. The illusion titled The Puzzled Fox was designed by US printmakers Currier and Ives in 1872. It challenges the viewers to locate 16 animal and human faces that are camouflaged so smartly that it almost seems impossible to locate them.