New Delhi | Jagran Sports Desk: Pakistan cricketer Umar Akmal, who recently got suspended by the Pakistan Cricket Board (PCB) under anti-corruption code, was brutally trolled by the netizens for his now-deleted tweet which went viral on the internet for its hilarious caption.

Umar Akmal, sharing an image with former Pakistan cricketer Abdur Razzak on Twitter, wrote a caption which left the social media users in splits. In his caption, Umar Akmal wrote, “Mother from another Brother”, botching up the popular phrase ‘Brother from another mother’. 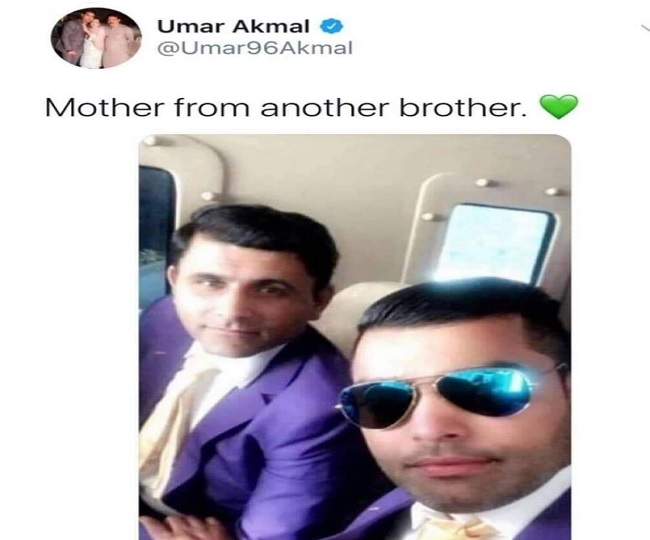 Shortly the batsman realised his mistake and deleted the post, but the netizens were quick to take the screenshot of the post which is going viral on the internet with some of the most rib-tickling trolls. The Twitteratti even started a hashtag #UmarAkmalQuote, which soon became a top trend on Twitter, with users writing their own botched up versions of different quotes along with the hashtag.

"If being a crime is handsome then arrest me," one user tweeted.

Reply with your favourite #UmarAkmalQuote

"No gain, No pain," tweeted another.

"If you are free at something, never do it for good," came another tweet.

If you are free at something, never do it for good - Umar Akmal

"If opportunity doesn't door, build a knock," tweeted another user.

One user went on to post an image from Umar Akmal’s wedding and wrote, “My wife with husband”.

While another user wrote, “A doctor a day, Keeps the apple away… Sir Umar Akmal”.

A doctor a day
Keeps the apple away...
*Sir Umar Akmal* pic.twitter.com/G771j5spKq

From his videos of post-match press conferences to his hilarious captions on different social media platforms, Umar Akmal often finds himself in the news for all the wrong reasons. He made a comeback for Pakistan last October but was soon the subject of more trolling after he made two consecutive ducks.

Meanwhile, news agency ANI on Thursday reported that the Pakistan Cricket Board (PCB) suspended Umar Akmal with immediate effect under Article 4.7.1 of the PCB Anti-Corruption Code, which means that he cannot take part in any cricket-related activity. The pending investigation is being carried out by PCB's Anti-Corruption Unit.