As soon as people in his village get to know about Virat’s super skills, the villagers started calling him Child Spider-Man.

New Delhi | Jagran Trending Desk: We have heard a lot about the mighty Spider-Man and even watched several movies on the superhero. But have you ever heard about the ‘Child Spider-Man’? Yes, we are talking about a three-year-old child, who defies the gravity to climb a wall just like Peter Parker in Spider-Man.

Virat Kaushik, a resident of Pundri city in Haryana’s Kaithal district is making headlines these days with his spider-like skills to climb up a wall and reaching the ceiling, without any support. As soon as people in his village get to know about Virat’s super skills, the villagers started calling him Child Spider-Man.

At first, Virat's grandmother Suman Devi saw him sticking up on the wall and she was scared to see him in this condition. She immediately lowered Virat down and threatened him that he would have been hurt if he had fallen. After that, climbing the wall became Virat's habit. He used to snatch the things of the children and climb on the wall and come down only after eating those things.

Dainik Jagran visited Virat’s house to see the ultimate feat of this 3-year-old child. And surely, it was difficult to believe how this child climbs up the wall. As soon as Virat was called by his uncle, Virat started climbing the wall without any fear and kept climbing up until his head hit the roof. 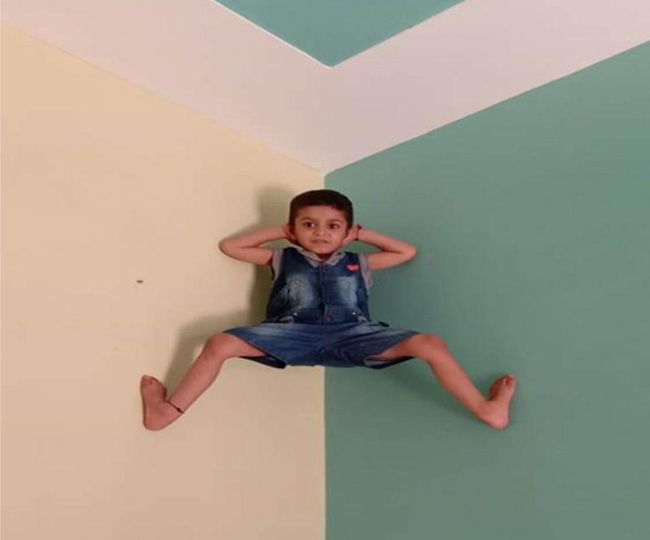 Then after that, he stopped on the wall and said hello to everyone. And with the ease, he is sticking on the wall surprised everyone. Virat's uncle Chandramouli said that everything he does is a gift from God.

Virat's grandfather Harikanth Sharma as reported by Dainik Jagran said that no one has taught Virat nor is there any sportsmen in his family, this is the miracle of God. He told that he got to know the talent of grandson Virat only a few days ago. Virat climbs like a lizard on any wall without any support and without fear.