New Delhi | Jagran Technology Desk: Koo - India’s microblogging and social media platform - has become the place for conversations in Indian regional languages. Out of the 1 crore users on Koo, almost 50% (50 lakh) users interact in Hindi. Further, of the 52+ million Koos on the platform, nearly half are Hindi. By making available a microblogging platform in non-English languages, Koo has created the opportunity for people fluent in their native languages to participate and engage in online conversations.

Also Read
Surprise! Rs 900 crore gets credited in bank accounts of 2 children in..

A Koo spokesperson said, “The majority of the Indian people communicate in native languages, leaving them out of the social media discussion, which is largely in English. As we aspire to bring the next billion users to the internet and remove the bias against non-English speaking audiences, Koo is on a mission to democratize the voice of India”.

“Koo has created a space where Indians who are comfortable speaking their mother tongues can express their thoughts and ideas freely. The platform enables users to Koo in their preferred language and rest assured that a large part of their community will understand the context without explanation. Koo seeks to bring people and communities together using language as a uniting factor,” he added.

As per various studies, the Indian internet user base is expected to reach the billion mark in the next 5-6 years. The Indian language internet users are expected to grow at a significantly faster rate than English users.

Some Chief Ministers communicate only in Hindi

Prominent leaders and celebrities from India who now use Koo have seen an uptick in their follower base. Recently, West Bengal’s All India Trinamool Congress (@AITC) - the party of Chief Minister Mamata Banerjee - created its official account on Koo. Shortly after, Tej Pratap Yadav of RJD also joined Koo. Similarly, Bollywood actors Tiger Shroff, Kriti Sanon, and Shraddha Kapoor are among the large number of Bollywood stars who have recently created official accounts on Koo.

Meanwhile, Koo Hindi fest 2021 is the first edition of the festival set up as part of Koo's #KooPeKaho campaign, which aims to connect and empower Indians who speak their mother tongue. The campaign is designed in line with Koo's vision to democratize India's voice by offering users a simple and easy-to-use microblogging platform where they can express themselves freely. The week-long celebration included various cultural activities and content that engaged with users on Koo. Some of these activities included #Kavishala, #MittikaSwad, #GeetSagar, #PictureAbhiBaki Hai and #EkDinKanayak.

1.#Kavishala – Thousands of creators come together to share their creation (poetry, shayari, etc.) and showcase their creative writing abilities. This was further overshadowed by an online conference of Koo (Ku) poets.

2.#MittiKaSwad - Travel bloggers and photographers came together to share their stories in the form of photographs of interesting places in India, followed by a conference to share them with fellow community members.

3.#Geetsagar - Thousands of users came forward to sing their favorite song in Hindi followed by a JAM event where users from across the country came together to sing tunes with the community, from rappers to singers representing their cultures.

4.#AbhiPictureBaakihai - Movie lovers celebrated #KooHindiFest by acting out favorite parts of their favorite movie scenes and had a grand event where movie lovers came together to discuss the Bollywood universe.

5.#EkDinKaNayak Inspired from the movie 'Nayak'. The contest invited users to engage in dialogue and debate to post Kuss playing the role of a fictional leader and to highlight issues and topics that needed government priority attention. . The competition received an exceptional response with thousands of participants from across the country. Eliminating terrorism, corruption, unemployment and sexual violence emerged as some of the most voiced concerns by the participants. In addition, participants also suggested curbing mandatory monthly allowances for housewives and pension of MLAs to revive the economy.

6.#KooPeKaho - #KooPeKaho and #KooPeKahoUparChado were an initiative by content creators to promote and nurture future influencers. The program included workshops designed for a wide variety of creators across the country, graduating from enthusiastic creators to the next generation of influencers in the country.

Uttar Pradesh Chief Minister Yogi Adityanath (@myyogiadithyanath) wrote, “Hindi language, a symbol of national unity in a country full of diversity, is an integral part of our identity and culture. Let us take a pledge to make maximum use of Hindi to establish it as the national language and the world language. #hindi_means_ku_app”. 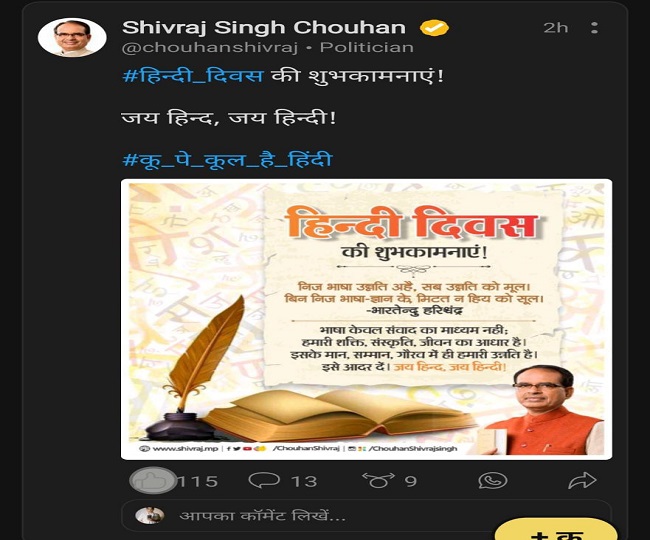 Himachal Pradesh Chief Minister, Shri Jairam Thakur (@jairamthakurbjp) wrote: “Hindi is the pride of India, the identity of India. On this 'Hindi Diwas', let us take a firm resolve to promote Hindi to protect the identity and pride of the country." 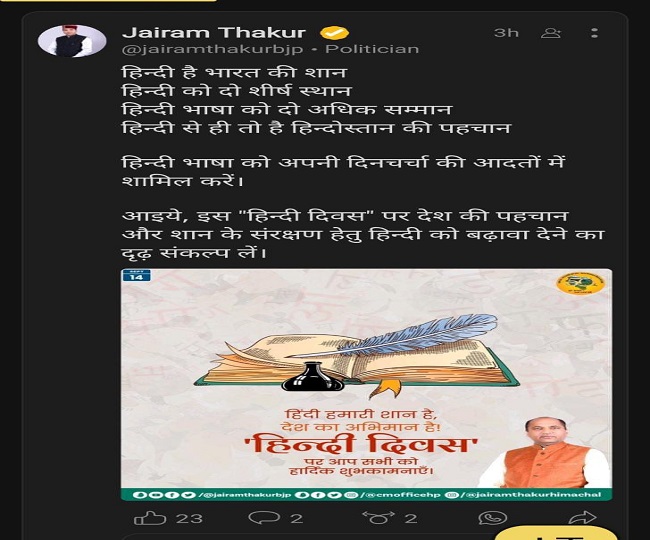 Former Chhattisgarh Chief Minister Dr Raman Singh (@drramansinghCG) wrote: “With Hindi growing in influence as the language of the Internet, people are now getting more attracted towards Hindi. The youth are now proudly talking in the new Hindi. Hindi is one of the fastest-growing languages on the Internet. MNCs Microsoft, Google is also working in Hindi now. It is clear that the scope of Hindi is increasing. Say with pride that we are Hindi." 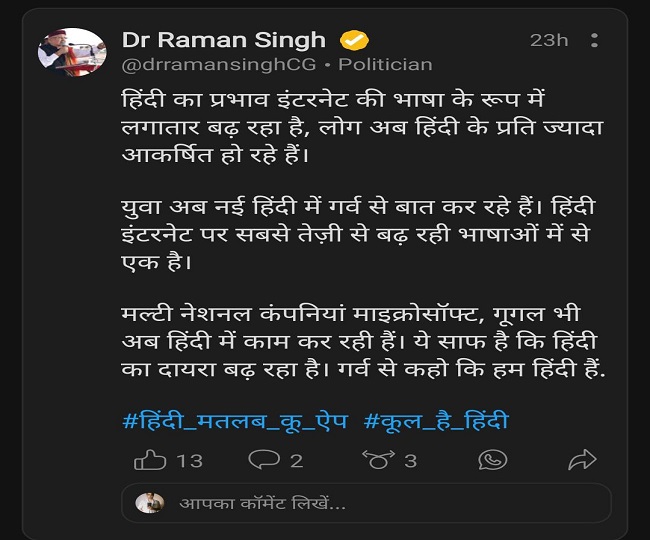 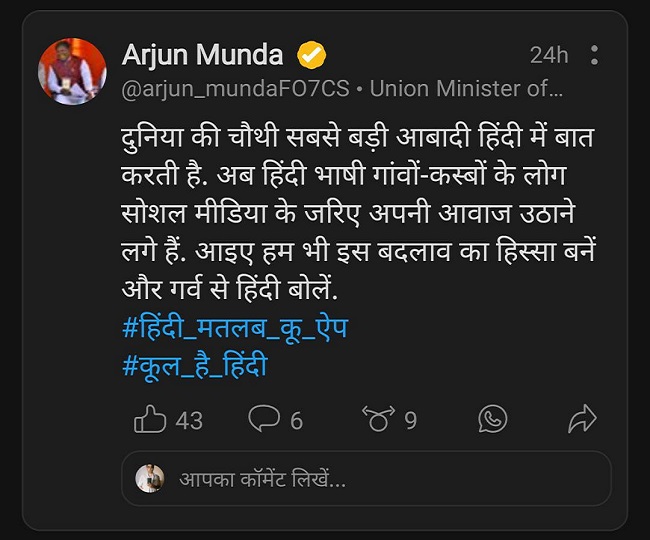 Tej Pratap Yadav (@tejpratapyadavofficial), former Bihar minister and RJD leader wrote: “In the 21st century, Hindi has become not only the language of poems or stories but also the language of employment. Talking about the popularity of Hindi, all multinational companies including Google, Microsoft have started working in Hindi, so understand the importance of Hindi, write and speak Hindi proudly. #hindi_means _ku_app #ku_pay_cool_hai_hindi 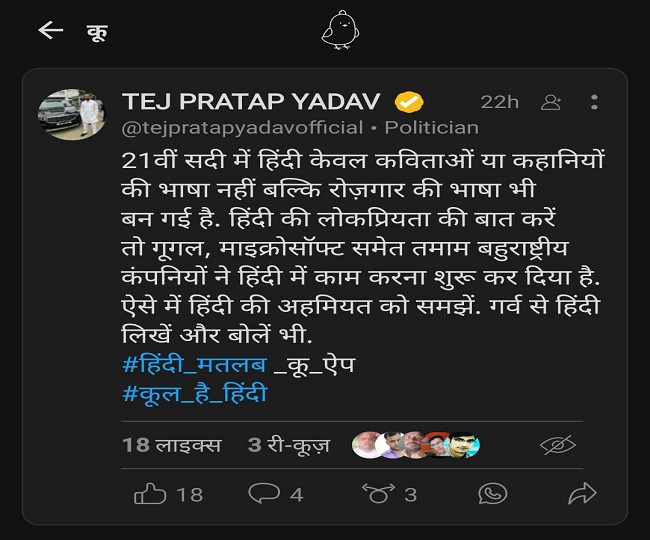 National President of Lok Janshakti Party, Chirag Paswan (@ChiragPaswanOfficial) wrote, “When India became free from the slavery of the British, the biggest question in front of the country was about the language because India was a country where many languages are spoken. After this, at the time of constitution-making, the Constituent Assembly gave Hindi the status of official language and I am proud of the land of Bihar which had earlier considered Hindi as its official language. #hindi_means _ku_app #ku_pay_cool_hai_hindi 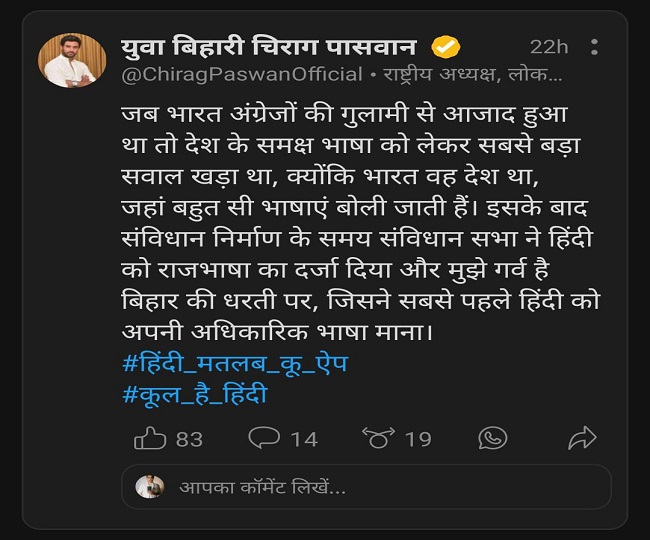