A family from Haroli bought a four-acre plot of land on the moon in the name of their son Girik Kapoor on his seventh birthday. The US agency has also sent documents related to buying land on the moon. Read on to know

New Delhi | Jagran Trending Desk: Be it birthdays or Valentine's Day people go crazy looking for gift ideas for their loved ones. And nowadays no one wants to stick to those chocolates and roses when it comes to that special one and that's they keep looking for a present as unique as possible. So, if you are one such person who's searching for an extraordinary gift for your close one then you've landed on the right page as probably this Himachal family can inspire you.

Yes, a businessman from Himachal Pradhesh bought a plot on the moon to fulfill their child's desire. It's true! a family in the Haroli region of Una district gifted their son, Girik Kapoor a 4-acre land on the moon on his 7th birthday on May 26. The plot was bought from a US agency for Rs 3.5 lakh and the agency even sent some documents related to buying land on the moon. 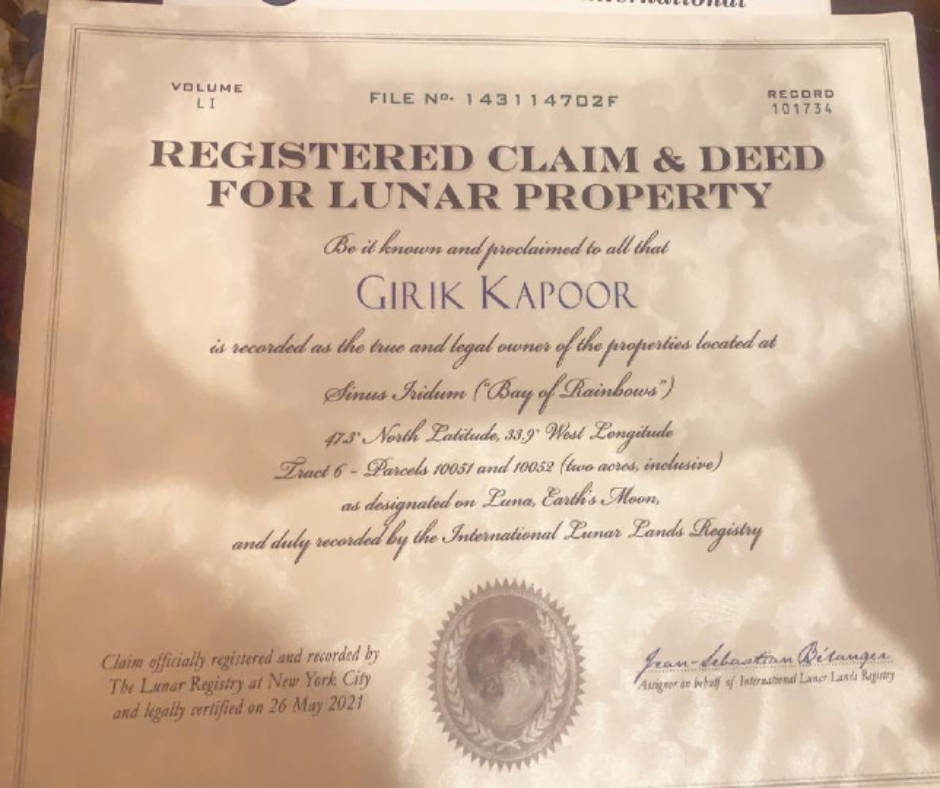 The businessman named Sanju Kapoor who gifted the land to his son belongs to a rich business family said that his son dreams of being an astronaut. Therefore, this was their gift for him to fulfil his dreams of going to the moon. Meanwhile, the boy's mother Vandana Kapoor said that earlier, people had purchased land on the moon through the same US agency. They said that the family has bought two 2-acre plots at different places on the moon. According to the documents, one plot has been purchased on the Bay Side and the other plot on the Lake of Dream.

Now isn't it exciting? Well, they are not the only people who've bought land on moon. Before, this, actor Sushant Singh Rajput and a builder from Saharanpur also purchased a plot on it.

What is it to buy a plot on the moon?

If you buy a plot on the moon, it's not that you can claim the piece of the land legally in terms of marking your territory. It also doesn't mean that one will have to pay the rent if an astronaut lands on your piece of moon. But you will get an official document that this piece of land belongs to you. As per the Lunar Settlement Initiative ("LSI"), "Under the terms of the LSI, property claims on Luna may be offered to private entities as a means to finance the exploration, settlement and development of the Moon and its resources."