CEO V Vaidyanathan gifted his math teacher one lakh equity shares worth around Rs 30 lakh as a token of gratitude.

New Delhi |Jagran Trending Desk: "Gratitude is the fairest blossom which springs from the soul" and the gesture by the CEO of a bank towards his teacher, who helped him during his difficult times, is a proof of that.

The IDFC first bank MD and CEO V Vaidyanathan gifted his math teacher one lakh equity shares worth around Rs 30 lakh as a token of gratitude for lending him money when he was going through a rough patch of time.

A Facebook post is doing rounds on the internet in which the story of how Saini lent money to Vaidyanathan to travel for an interview is described.

According to the post, Vaidyanathan, who then resided in Chennai, had qualified for an engineering course at Birla Institute of Technology (Mesra) but did not have the money to travel there to give the interview and complete the counselling formalities. In those trying times, his then math teacher Gurdial Saini lent him Rs 500.

The MD & CEO of IDFC First bank is V.Vaidyanathan. I have met Vaidya a few times when he was at ICICI and found him to...

The post adds, "Vaidya searched for him to repay but Mr.Saini had moved jobs. Many years later, with the help of a former colleague, he got to know that Mr.Saini is in Agra, called him up, expressed his gratitude for the timely help."

Earlier this month, IDFC FIRST Bank made a regulatory filing to the stock exchanges and according to the official notice addressed to Saini, Vaidyanathan had transferred one lakh equity shares to his teacher.

The notice reads, "We wish to inform you that Vaidyanathan has transferred 1,00,000 fully paid-up equity shares of IDFC FIRST Bank Limited, held by him in his personal capacity, to his former schoolteacher, Gurdial Saroop Saini, as a gift." 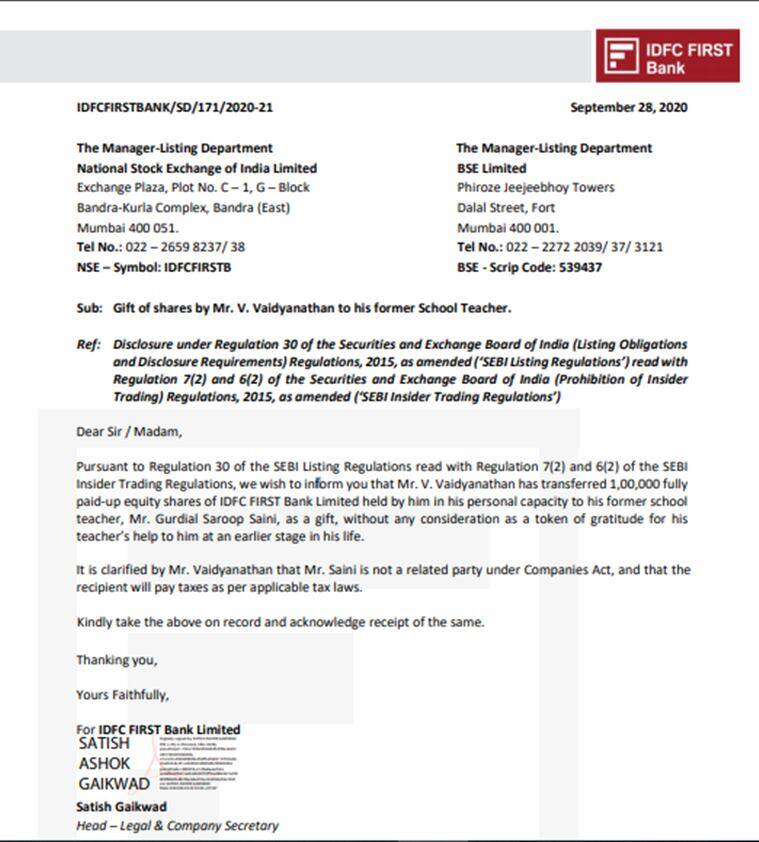 Since being shared online, the post has gone viral and netizens are all praises for the kind gesture of Vaidnayanath towards his teacher.

One of the users wrote, "Wow.....true expression of gratitude." while, another said, "Such a redeeming story, this day, this age!"