Currently, the said option is under test and the report states that WhatsApp is working on bringing the same feature to WhatsApp beta for iOS and Desktop.

New Delhi | Jagran Technology Desk: In a bid to improve user experience, Meta-owned messaging platform, WhatsApp may soon allow its users to edit the text they have sent. Currently, the platform does not have the said feature, if a user sends a text, the said text can only be deleted and not edited. But, soon enough users will get an edit option for the same.

"After announcing that some major features are under development such as group polls and WhatsApp Premium, WhatsApp is finally working on the ability to edit text messages for a future update of WhatsApp beta for Android, iOS, and Desktop!," according to WABetaInfo.

According to the WhatsApp beta tracker WABetaInfo, the messaging app has started testing the option to allow users to edit their text messages. It would appear alongside the existing Info and Copy options that surface once you long-press a text message on the app. 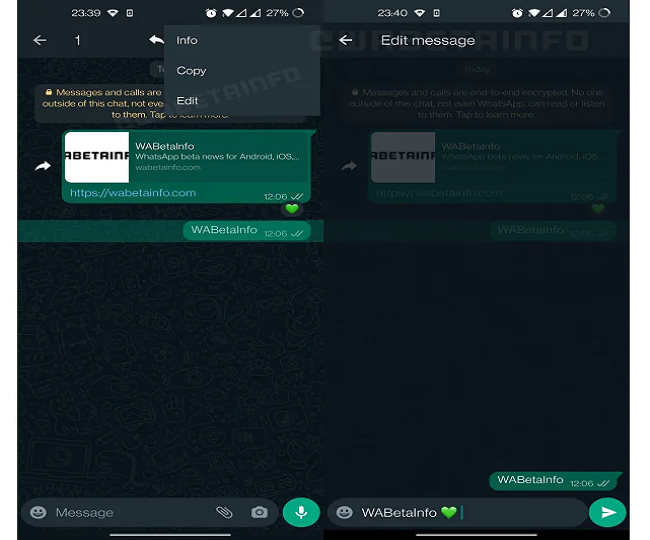 "Probably there won’t be an edit history to check previous versions of edited messages, but Since this feature is under development, their plans may change before releasing the feature. In addition, details about the time window to let people edit their messages are unknown at the moment, but we will immediately let you know when there is news," WABetaInfo added.

Currently, the said option is under test and the report states that WhatsApp is working on bringing the same feature to WhatsApp beta for iOS and Desktop, and more details will be available later. Recently, the Meta-owned platform announced that the messaging platform has announced that it is rolling out new features, including emoji reactions, bigger files and groups, it will slowly allow users to add up to 512 people in a group which currently allows only 256 people.