NASA has released an image that illustrates the intensity of the damage caused in Beirut.

New Delhi | Jagran News Desk:
National Aeronautics Space Administration (NASA) has released an image that illustrates the scale of devastation and damage caused by the explosion in Lebanon’s capital city Beirut on August 4.

NASA’s Advanced Rapid Imaging Analysis (ARIA) team collaborated with the Earth Observatory of Singapore to map the extent of the likely damage across Beirut on. 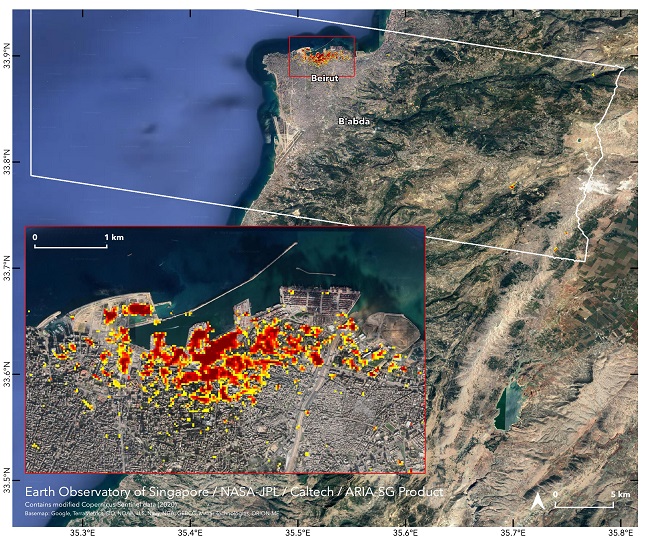 The map has recorded the data based on the satellite, it used the colour scale to identify the intensity of the damage. The map shows ground surface changes in Beirut which indicates the severity of sustained damage across the affected parts of the city.

The image shows the maximum damage near the port site, dark red pixels illustrate severe damage whereas, orange pixels determine moderate damage in the city and yellow indicates comparatively less destruction after the explosion. However, each colored pixel map represents an area of 30 meters on the ground. The map also shows patches of varying sizes and other damages towards the south of the port.

Before and after images from the #explosion that happened in #Beirut, #Lebanon on August 4, 2020. Before image from June 2020 and after image from today, August 5, 2020. More imagery showing the devastation will follow. pic.twitter.com/dfj4ItyTXL

NASA scientists believed that the data provided by this map can help identify the areas that have been most severely affected by the blast, which can help organise priorities, locate the people who require assistance, and ultimately facilitate relief efforts, said Lebonan’s news report.

NASA’s map shows large blots of dark red regions a good distance away from the Port of Beirut, as well as patches of varying sizes and intensity scattered over even larger distances south of the port, all the way from east to west.
A massive explosion occurred in the Beirut city of Lebanon on August 4, which killed more than 160 people in the city. After the major incident, various countries have pledged millions of dollars in relief and send bits of help in all possible ways to support Lebanon.