Unable to use the service, people have even started posting the issue on social media websites, including Twitter, asking Google to resolve the glitch as soon as possible.

Unable to use the service, people have even started posting the issue on social media websites, including Twitter, asking Google to resolve the glitch as soon as possible. Google Meet's server has been down since 7 am in morning. Several students supposed to join online classes also complained about not being able to use Google Meet. Many people are facing audio-related issues as well.

Several users also wrote about the issue on Downdetecter, an online platform that provides users with real-time information about the status of various websites and services.

Also Read
From 'view once' to 'read later', 4 upcoming updates of WhatsApp that you..

"Meet is not working specially for people in North India. I am getting disconnected and can't hear audio and see the presentation," wrote a user on Downdetecter. "Meet not working properly, disconnecting automatically and also no audio. Don't fix its great. Thanks ?? no class today," another user said. 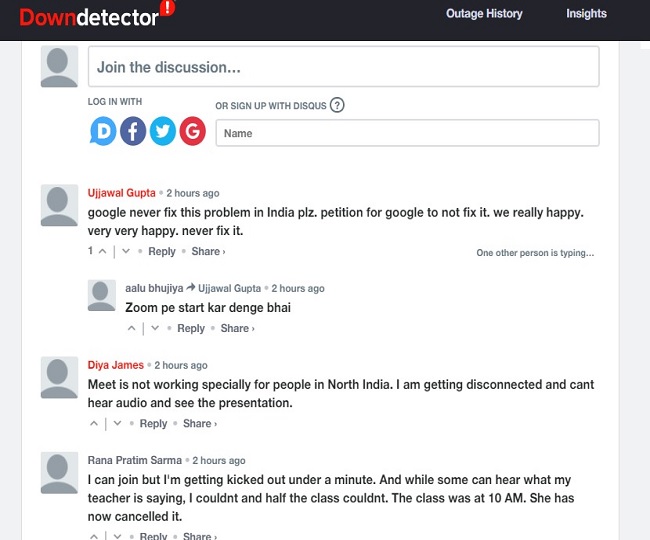 Many users also took to Twitter to complain about Google Meet's server down. "@GoogleIndia Google meet not working, it's meeting Left Every time problem getting today after some updates from Microsoft Windows," tweeted a user.

@GoogleIndia Google meet not working, it's meeting Left Every time problem getting today after some updates from Microsoft Windows

Google meet is down so no class today 🥳🥳 pic.twitter.com/KLRpBmgbsY

Meanwhile, people are still waiting for the issue to get resolved. No official statement about the server down has been made yet. It was only a few days back that Google Meet for web had introduced a new User Interface (UI) for its users. It will now show suggestions in the form of gentle notifications that will appear as a bubble and red dot over the 'More Options' button next to 'End Call' in the refurbished bottom bar.

The platform will now give users personalized suggestions and recommendations on how to improve their call quality. This will revolve around battery level, bandwidth, and network connection, and presentation status. However, just days after the big announcement, the stalling of Google Meet comes as a surprise to its users.