Earlier in the day, Sushmita Dev had resigned from Congress and sent her resignation to party chief Sonia Gandhi. However, she did not reveal the reason behind her resignation and said that she is looking forward to "begin a new chapter of public service".

Earlier in the day, Dev had resigned from Congress and sent her resignation to party chief Sonia Gandhi. However, she did not reveal the reason behind her resignation and said that she is looking forward to "begin a new chapter of public service".

"I cherish my three-decade-long association with the Indian National Congress. May I take this opportunity to thank the Part, all its leaders and workers who have been a part of my memorable journey," she wrote. "Madam, I thank you, personally, for your guidance and opportunities you gave me. I value the enriching experience". 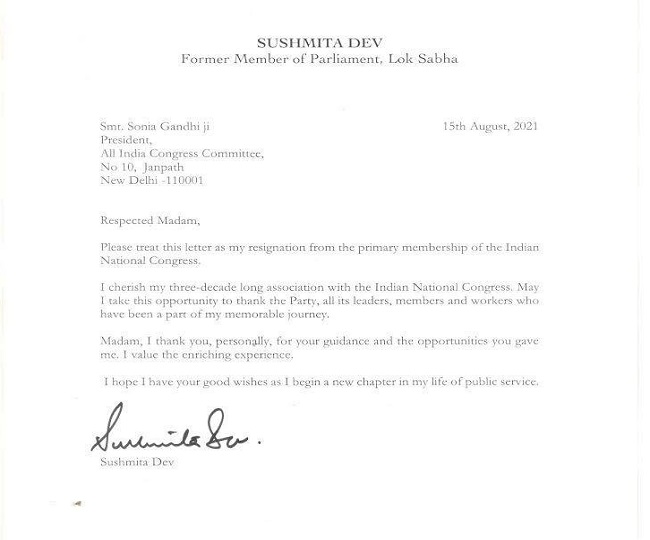 Dev, daughter of former Assam Congress leader and seven-time parliamentarian Santosh Mohan Dev, is considered to be the face of the Congress in Assam, especially in the Barak Valley -- a Bengali-speaking region. She had also backed the Citizenship (Amendment) Act -- the contentious law enacted by the Parliament in 2019 -- and claimed that people of the Barak Valley were in its favour.

Also Read
'As if they vowed to demoralize the Army': PM Modi attacks Congress over..

"...we know what it means to be a migrant. I am in favour of such a law, but this act [CAA] is not capable of granting citizenship to anyone. I would support it with some amendments, especially if it includes Muslims," she had said, as reported by Hindustan Times.

Dev's statement had sparked rumours that she might resign from the Congress ahead of the crucial assembly elections in Assam in 2019. However, the party dismissed the reports and said that Dev is not upset with the Congress leadership.

"It has been brought to the notice of the Assam Pradesh Congress Committee that a speculative news about resignation of President, All India Mahila Congress Ms Sushmita Dev is doing the rounds on television and web portals," Congress spokesperson Bobbeeta Sharma had said.