Parliament Monsoon Session: The proceedings were first adjourned for 15 minutes and then for an hour after the suspended members refused to leave the House when it met again.

At least nineteen Rajya Sabha MPs on Tuesday were suspended from attending the sitting of the house for a week for disrupting the proceedings of the house. This came a day after four Congress MPs were suspended from attending the entire Monsoon Session over unruly behaviour and disrupting the proceedings of the Lok Sabha. The four suspended leaders are Manickam Tagore, Ramya Haridas, Jothimani and TN Prathapan. 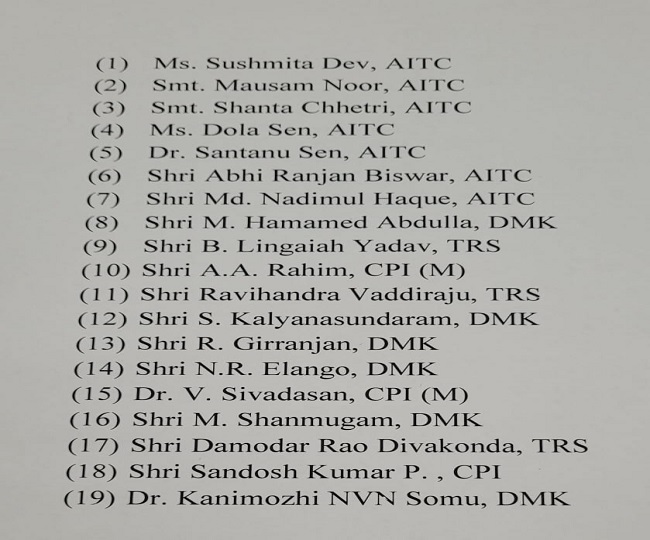 The opposition MPs, who have been stalling the proceedings since the start of the monsoon session on July 18 over price rise and the levy of the GST on daily essentials, were suspended as they did not heed Deputy Chairman Harvansh's repeated pleas to leave the Well of the House and go back to their seats.

Minister of State for Parliamentary Affairs V Muraleedharan moved a motion to suspend 10 MPs, but when it was adopted by a voice vote, Harivansh read out the names of 19 members who have been suspended for the rest of the week. Harivansh said the MPs were suspended for showing "utter disregard" to the House and the authority of the Chair.

Soon after the suspension, the Trinamool Congress lashed out at the Narendra Modi government alleging that it had turned Parliament into a "deep, dark chamber". "Democracy has been suspended in India. Parliament has been turned into a deep, dark chamber," TMC leader Derek O'Brien said.