Rajasthan Political Crisis: Pilot, who skipped the meeting after announcing open rebellion, denied joining the BJP amid reports that he may float his own party.

Meanwhile, Pilot, who skipped the meeting after announcing open rebellion, denied joining the BJP amid reports that he may float his own party in his bid to become CM with outside support from the saffron party.

On the other hand, Congress continued to make last-dtich efforts to placate sulking Pilot, saying that "its doors are open" for him. Pande, Surjewala and Ajay Maken were rushed to Jaipur ahead of the meeting amid a power tussle between Chief Minister Ashok Gehlot and Deputy Chief Minister Sachin Pilot.

Here are the highlights of the day on the ongoing political crisis in Rajasthan:

03:41 pm: Top Congress leaders, including Rahul Gandhi and Priyanka Gandhi, are in touch with Sachin Pilot and are trying to placate him: PTI

03:32 pm: Soon after the CLP meeting concluded, the Congress shifted its 107 MLAs to a resort to avert any potential threat to the government in the wake of Pilot's claims of support of 30 MLAs.

#Rajasthan : Buses, carrying MLAs, leave from the residence of Chief Minister Ashok Gehlot after the Congress Legislative Party (CLP) meeting concluded. One of the MLAs says, "All is well." pic.twitter.com/shZGBXlHQN

02:05 pm: Rajasthan Deputy CM Sachin Pilot's posters have been put back in the Jaipur Congress office, after they were taken off amid, according to a News18 report.

12:28 pm: Times of India quoted sources saying that 96 MLAs are present in the CLP meet at Ashok Gehlot's residence.

12:27 pm: On behalf of Congress leadership, including Sonia ji & Rahul hi, I convey that doors of Congress party are always open for Sachin ji or any member: Surjewala

12:08 pm: Over the last 48 hours, Congress leadership has spoken to Sachin Pilot a number of times about the present political situation: Sachin Pilot

12:07 pm: I want to clearly state that Congress govt is stable in Rajasthan and we will complete the full term. No amount of conspiracy by BJP will be successful in toppling our govt in the state: Randeep Surjewala

12:04 pm: If anyone, be at any post or profile, has any problem, they must come forward and mention the issue on the party forum. We will work to resolve it together and keep our govt intact in the state: Randeep Surjewala

12:03 pm: I appeal to all Congress MLAs that people have voted for Congress to lead a stable govt in the state, so all MLAs should take part in the Congress Legislative Party meeting today and make our govt in the state stronger: Randeep Surjewala

11:05 am: Over 90 MLAs at Rajasthan CM Gehlot's residence in Jaipur for Congress Legislative Party meeting. The meeting has started.

10:50 am: Sachin Pilot is now in Bharatiya Janata Party. Everyone knows BJP’s attitude towards Congress party. We don’t need a certificate from BJP. In Congress Party, all leaders and workers are respected: AICC general secretary in-charge of Chhattisgarh, PL Punia

10:39 am: Income Tax Department conducting raids at multiple locations across the state, including office and residence of Congress leader Dharmendra Rathore and one Rajiv Arora, a member of State Congress Office.

10:27 am: News18 quoted quoted sources saying that Pilot may float his own party as he is not going to join the BJP. The party is likely to be named 'Pragatisheel Congress' and a formal announcement will be issued after the CLP meeting, the report added.

10:20 am: People of Rajasthan had given an opportunity to Congress to form govt in the state, they should have used it properly. CM should have kept his govt intact, but he is not able to do it. His party MLAs are not happy with him: Om Mathur, BJP.

09:56 am: I've tried to speak to him (Sachin Pilot) and have also sent messages to him but he hasn't replied yet. He isn't above the party. The party is ready to listen to him but no indiscipline will be tolerated. I'm hoping he'll turn up for the meeting: Congress leader Avinash Pande

09:50 am: Just ahead of the Congress party meeting, Sachin Pilot told NDTV that he is not joining the BJP. This comes amid reports that Pilot may meet BJP President JP Nadda today.

09:44 am: BJP will not be successful in its attempts to topple Congress govt in Rajasthan. All our Congress MLAs & our alliance MLAs are with Chief Minister Ashok Gehlot; all of them will be attending the meeting of Congress Legislative Party today: Congress MLA Mahender Chaudhary

09:22 am: BJP leader Jyotiraditya Scindia hit out at the Congress, saying talent and capability find "little credence" there.

09:05 am:  A meeting of Congress Legislative Party scheduled to be held at Rajasthan Chief Minister Ashok Gehlot's residence today. 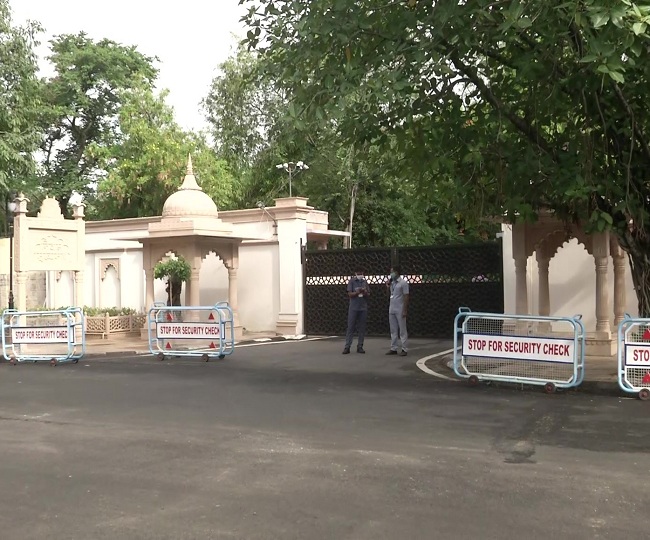 08:58 am: Congress leader KC Venugopal (in file pic) to reach Jaipur today for the CLP meeting.

08:55 am: In the 200-member Rajasthan Assembly, the Congress has 107 MLAs and the BJP 72. The Congress also has the support of 10 out of 13 independents, and other party MLAs like Rashtriya Lok Dal (1), which is its ally. The Congress also considers Bhartiya Tribal Party (2) and CPI(M) (2) MLAs as their supporters. Apart from its 72 MLAs, BJP's ally Rashtriya Loktantrik Party (RLP) has three MLAs.

08:48 am: Gehlot has accused the BJP of trying to topple the state government through horse trading. However, the BJP has denied the charges, saying the situation is a result of the power tussle between Pilot and Gehlot.

08:36 am: The bone of contention is a notice sent to Pilot by the Rajasthan police, who claimed to have stumbled on a plot to topple the Congress government. The same notice was also sent to Gehlot, Government Chief Whip Mahesh Joshi and some other MLAs, but those close to Pilot insisted that it was meant to “humiliate” him.

08:35 am: The crisis within the Congress comes barely three months after the BJP managed to return to power in Madhya Pradesh after Jyotiraditya Scindia switched sides with the saffron party. Scindia's differences with the top leadership, including Rahul Gandhi, led to the downfall of the Congress government in the state.

08:29 am: Some other MLAs have spoken to the chief minister over the phone and they will also sign the letter: Congress leader Avinash Pande

08:28 am: As many as 109 MLAs have signed the letter to express full confidence in the Congress government led by CM Ashok Gehlot and in the leadership of Sonia Gandhi and Rahul Gandhi: Congress Leader Avinash Pande

08:24 am: The BJP says it will wait and watch what happens in the Congress CLP meeting today which will give a clear picture of the political situation.

08:23 am: A News18 report quoted BJP sources saying that there could be no meeting between Sachin Pilot and BJP President JP Nadda. Earlier, it was reported that the sulking deputy CM may meet Nadda today.

08:15 am: Sachin Pilot - who claims the support of 30 MLAs - has refused to attend a key meeting of Congress MLAs called by Chief Minister Gehlot at 10:30 AM today. The Congress has issued a whip to its MLAs to attend the meeting.