The Supreme Court will Tuesday hear the plea of Rajasthan Assembly Speaker against the Rajasthan High Court order restraining him till July 24 from conducting disqualification proceedings against Sachin Pilot and 18 other rebel Congress MLAs.

New Delhi | Jagran News Desk: The Supreme Court will Tuesday hear the plea of Rajasthan Assembly Speaker against the Rajasthan High Court order restraining him till July 24 from conducting disqualification proceedings against Sachin Pilot and 18 other rebel Congress MLAs. The top court had refused to stay the High Court's order and said that the issue will be decided after the extended hearing. However, the apex court said that the High Court's decision on Pilot and the team's plea against disqualification notices by Speaker will be subject to the outcome of the SLP before the court.

Sachin Pilot has revolted against his former boss and Rajasthan Chief Minister Ashok Gehlot. He, however, said that he will not join the BJP but Congress has been alleging that the rebel leader was playing into the hands of the saffron party. The Congress has also alleged a conspiracy to topple the Rajasthan government by the BJP with the help of Pilot and other rebel MLAs.

Here are the updates on Rajasthan Political Crisis:

04:55 pm: The Governor is only a formal instrument to sign & issue summons to the MLAs. If a Chief Minister who is accused of not enjoying a majority wants to prove his majority, is entitled to call a session at the earliest to prove his majority: Congress leader P Chidambaram

04:30 pm: Karnataka: Former CM Siddaramaiah, State Congress Chief DK Shivakumar & other party leaders stage a protest after they were stopped by police on their way. They were holding a rally from KPCC office to Raj Bhawan in Bengaluru under the campaign 'Speak Up for Democracy'. 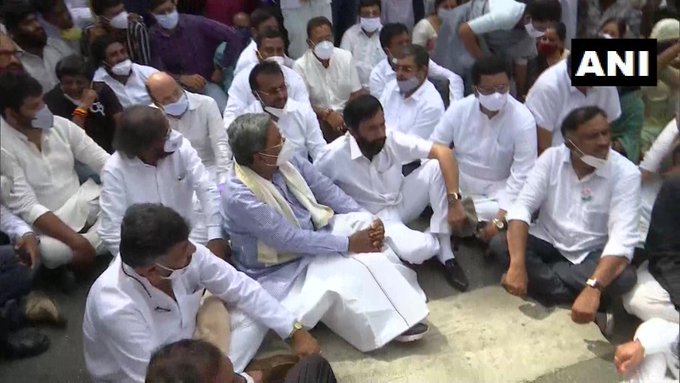 03:19 pm: Senior Congress leaders and former law ministers Ashwani Kumar, Kapil Sibal and Salman Khurshid have written to Rajasthan Governor Kalraj Mishra. In their letter, they said that delay in convening the house will lead to a constitutional crisis in the state.

03:05 pm: We 6 BSP MLAs have already merged into Congress. After 9 months, now the Bahujan Samaj Party (BSP) is taking note. This is a manipulation of what the BJP says, not the BSP. On the same basis, this whip has been issued, on the same basis these courts are going: Lakhan Singh BSP MLA.

02:10 pm: Congress has claimed that three of the 19 rebel MLAs will return to the Gehlot camp within the next 48 hours.

01:40 pm: Ashok Gehlot says he spoke to PM Modi over the phone to discuss the conduct of Governor Kalraj Mishra, who has not summoned the Assembly session despite proposals from the Council of Ministers.

12:20 pm: "It will be difficult to call all the MLAs for the Assembly Session in the wake of COVID-19 pandemic. Can you consider giving a 21-day notice over the convening of Assembly Session?" Rajasthan Governor to Gehlot Cabinet, according to ANI.

Congress is holding a nationwide protest under the campaign 'Speak Up for Democracy' pic.twitter.com/ZS68nj1BXr

11:45 am: Congress workers and leaders, including state Congress chief KS Alagiri, protest near Governor's office in Chennai under their nationwide 'Save Democracy and Save Constitution' campaign.

Tamil Nadu: Congress workers and leaders, including state Congress chief KS Alagiri, protest near Governor's office in Chennai under their nationwide 'Save Democracy and Save Constitution' campaign. pic.twitter.com/UNGGPS9xt5

11:00 am: Rajasthan Speaker CP Joshi has asked for the withdrawal of his Special Leave Petition against High Court's order restraining him from taking action against Sachin Pilot and 18 other rebel MLAs.

10:40 am: Breaking: Delhi Congress chief has been detained by police on way to a protest site where the party leaders were scheduled to assemble to protest against the BJP over Rajasthan crisis.

10:08 am: A constitutional & legal situation has risen. Either the High Court should decide or the Governor should intervene in the matter: Satish Poonia

10:05 am: BSP Gen-Secy SC Misra wrote to Governor & Assembly Speaker that the alleged merger of BSP-Congress is unconstitutional. The petition is pending before High Court too: Satish Poonia, Rajasthan BJP chief on BSP's whip to all its Rajasthan MLAs to vote against Congress in the floor test

08:55 am: Meanwhile, Ashok Gehlot Cabinet has sent a reworked proposal to the Rajasthan Governor to summon the Assembly session on July 31 after the latter rejected their previous proposal. This time, Gehlot has not mentioned the floor test and the agenda of the session is coronavirus crisis and a few other bills.

08:45 am: BSP chief Mayawati has asked six MLAs who switched sides to the Congress last year to vote against the Ashok Gehlot government during the floor test.

08:30 am: Supreme Court to hear Rajasthan Assembly Speaker's SLP against High Court's verdict on Sachin Pilot and the team's plea against disqualification notices.