The political crisis in Rajasthan looks nowhere near the end as the Congress launches state-wide protests and sit-ins against the BJP at district-headquarters over the alleged horse-trading of MLAs from Saturday. Follow Rajasthan Political Crisis LIVE Updates here.

New Delhi | Jagran News Desk: The political crisis in Rajasthan looks nowhere near the end as the Congress launches state-wide protests and sit-ins against the BJP at district-headquarters over the alleged horse-trading of MLAs from Saturday. The protests come after Rajasthan Governor Kalraj Mishra refused to allow Assembly session advised by Ashok Gehlot-led state Cabinet, saying that he has not received the agenda for calling the session on such short notice. Earlier, CM Gehlot held a late-night Cabinet meeting to discuss the six points raised by the Governor. The meeting came after the high drama outside Governor's house where CM Gehlot and MLAs from his camp held a five-hour sit-in.

06:30 pm: "The Chief Minister is the head of the state and he said he'll not be responsible for a breach in law and order situation. If not him, then who'll be responsible? He should tender resignation for using such language," says Leader of Opposition Gulab Chand Kataria after meeting with Governor.

06:20 pm:  The Supreme Court is likely to hear the plea filed by Rajasthan Speaker CP Joshi against Rajasthan High Court verdict on Monday.

05:30 pm: The Cabinet meeting chaired by Ashok Gehlot at his residence has ended. During the meeting, the answer sought by the Governor on 6 points was discussed among other issues. 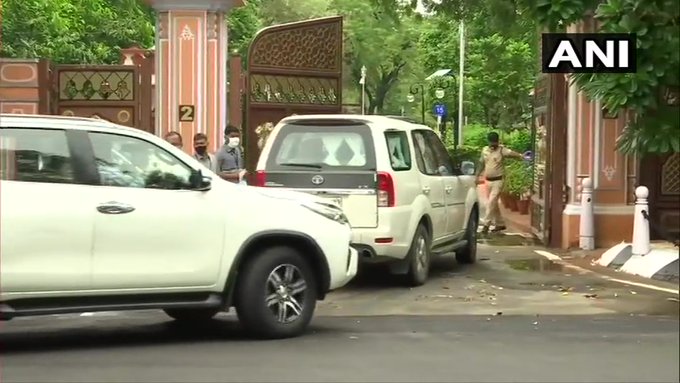 04:40 pm: Ashok Gehlot has reportedly deferred his meeting with the Governor and reached his residence for another Cabinet meeting.

03:55 pm: Gehlot attacks Union Minister Gajendra Singh Shekhawat: "First his name appeared in the tapes and now even in this case, Gajendra Singh ji's name is increasingly appearing, so why has the government not taken any action and dismissed him, this is a matter of concern," he said quoting a report on  Sanjivani cooperative scam.

03:45 pm: "We will go to Rashtrapati Bhawan to meet the President, if needed. Also, if required, we will stage a protest outside the Prime Minister's residence," Gehlot tells MLAs at Fairmont Hotel.

12:15 pm: The Ashok Gehlot Cabinet will meet again shortly to revise a proposal to be sent to Governor Kalraj Mishra requesting him to convene a session of the Assembly.

10:30 am: Governor asks, why floor test in  Assembly if you have the majority: Rajasthan Governor Kalraj Mishra has asked CM Ashok Gehlot why does he need to Vote of Confidence in Assembly if he has the majority.

10:15: am: Rahul Gandhi asks Governor to call Assembly session: "The country has a rule of law and the Constitution to run it. Governments are formed and run by the people and their majority. BJP's conspiracy to topple the Rajasthan government is clear. This is an insult to the eight crore people of Rajasthan. The Governor should call a session of the Legislative Assembly so that the truth comes before the country," he Tweeted.

09:50 am: Congress protests against BJP today: Congress party will hold state-wide protests and sit-ins against the BJP over the alleged horse-trading of MLAs which led to an ugly political crisis in Rajasthan.