New Delhi | Jagran News Desk: Amid the political turmoil in Rajasthan reaching the doors of the high court, Chief Minister Ashok Gehlot is expected to address the media today.

On Thursday, Sachin Pilot and 18 other dissident leaders moved the high court, challenging the notices from the Rajasthan Speaker over a Congress move to disqualify them from the state assembly. However, the matter which was heard by a division bench of the Rajasthan High Court, has been deferred till Monday.

The 19 MLAs were sent notices by the assembly secretariat on Tuesday and allowed up to Friday to give their replies. The notices said Speaker C P Joshi will take up the matter at 1 pm on Friday.

17:04 pm: With this, the Speaker's action on notices sent to dissident Congress MLAs has also been deferred till Tuesday evening.

16:14 pm: According to a News18 report, Sachin Pilot today spoke to a top party leader, discussing a legal case and said that he still is a Congress man.

14:49 pm: The bench rises for lunch. Hearing will continue after lunch

14:03 pm: The Rajasthan HC had allowed Congress chief whip Mahesh Joshi's plea to be added as a respondent in the case, reports PTI

13:30 pm: Hearing begins at Rajasthan High Court on a petition filed by Sachin Pilot and 18 other Congress MLAs against disqualification notices issued to them by the Assembly Speaker

13:17 pm: BJP rejects all the baseless allegations being levelled against the BJP leaders by Congress in Rajasthan. Actually, Congress is frustrated as it couldn't put its house in order. They want to blame BJP for their failures by using a manufactured audio clip, says BJP's Sambit Patra

13:14 pm: Hearing of Sachin Pilot's plea against disqualification will begin soon at the Rajasthan High Court

12:22 pm: Sanjay Jain was interrogated yesterday, he was called today also. Presently we are trying to ascertain some facts from him: Ashoke Rathore, ADG Special Operations Group (SOG), Rajasthan

12:21 pm: There were two complaints from Mahesh Joshi (Congress leader), it is with respect to the audio that went viral yesterday. We registered 2 FIRs under section 124A and 120B. The veracity of clip to be investigated: Ashoke Rathore, ADG Special Operations Group (SOG), Rajasthan

12:20 pm: What happened today was shameful for the politics of Rajasthan. Chief Minister's residence becoming a centre of fake audio and attempting character assassination of leaders. Attempts have been made to drag Central Ministers in the matter: Satish Poonia, Rajasthan BJP President

11:50 am: Congress issues statement on the suspension of MLAs Bhanwar Lal Sharma and Vishvendra Singh from the primary membership of the party. Show cause notices issued to them to "explain their conduct in the conspiracy to topple Congress govt in Rajasthan." 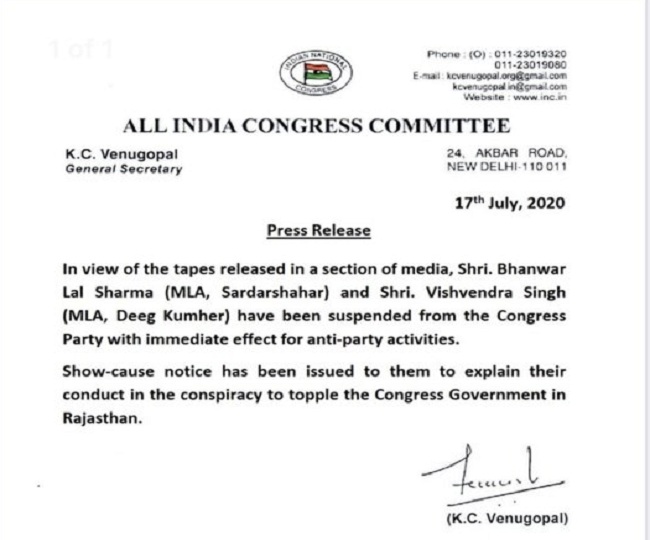 11:48 am: I am ready to face any investigation. The audio doesn't have my voice: Union Minister, Gajendra Singh Shekhawat

10:14 am: We also demand that Congress MLA Bhanwar Lal Sharma and BJP leader Sanjay Jain should also be booked. It should also be probed as to who arranged the 'black money' to bribe MLAs & who were given the bribe: Randeep Surjewala

10:08 am: Sachin Pilot should come forward and make his stand public on the allegations of providing MLAs' list to BJP: Randeep Surjewala

10:05 am: I demand that an FIR is registered by SOG against Union Minister Gajendra Singh Shekhawat & a probe is initiated into the tape. If it is suspected that he could influence the probe, then a warrant should be issued & he should be arrested immediately: Randeep Surjewala

09:48 am: Modi govt and BJP 'conspiring' to grab power instead of fighting coronavirus pandemic: Randeep Surjewala

09:44 am: Surjewala reads out transcript from an audio tape, with purported talks of 'horse trading', claims that voices in the audio clip are of Gajendra Lal, Bhanwar Lal.