Punjab Political Crisis: Guv accepts Captain's resignation; new CM to be decided by Sonia Gandhi only | As it happened

Punjab Political Crisis: Following the demand of the MLAs, the All India Congress Committee (AICC) has called a meeting of the state's Congress Legislature Party (CLP) today at 5 pm.

New Delhi | Jagran Politics Desk: Captain Amarinder Singh on Saturday resigned as Chief Minister of Punjab, citing continued humiliation by the Congress leadership over the past two months. The Chief Minister made it clear that he would explore and exercise his future options when the time comes. Captain Amarinder Singh said he would decide his future political course of action in consultation with his supporters who have stood by him for over five decades.

"There is always an option, and I will use that option when the time comes...at the moment I am still in Congress. I was humiliated three times by the Congress leadership in the past two months...they called the MLAs to Delhi twice and now convened CLP here in Chandigarh today," said Captain Amarinder, adding that he had decided and informed Congress president Sonia Gandhi in the morning that he would resign.

"Apparently they (Congress high command) do not have confidence in me and did not think I could handle my job. But I felt humiliated at the manner in which they handled the whole affair," he told media persons at the gate of the Raj Bhavan after giving his resignation letter to the Governor. "Let them appoint who they trust," he remarked, taking a dig at the party leadership.

Here are the Highlights from Punjab Political Crisis:

6:15 pm: Punjab CLP meeting is over. No decision was taken on the new leader and passes resolution to give all rights to the Party High Command to take a decision and final decision will be acceptable to all CLP members.

5:50 pm: Navjot Singh Sidhu will ruin Punjab, said Capt Amarinder Singh after his resignation from the CM post. "He is a total disaster... wasn't able to run one minister, he'll run Punjab? I won't accept that. He could not handle one Ministry how can he handle whole of Punjab?" he said.

5:25 pm: Capt Amarinder Singh resigned from his post as CM today, and in an exclusive interview with News18 said "options are always open in politics, which is a fast-moving game". On Sidhu, he said he had already told the party high command how a party cannot function with him pulling right and Sidhu pulling left, which would result in the party splitting open.

5:15 pm: Congress leader Amarinder Singh responds on being asked "Would you be accepting new chief minister made by Punjab Congress?"

#WATCH | Congress leader Amarinder Singh responds on being asked "Would you be accepting new chief minister made by Punjab Congress?" pic.twitter.com/cPvQTZo8bH

4:57 pm: Whoever they (party high command) have faith in, can make them (Punjab CM)...: Amarinder Singh after resigning as Punjab CM

4:52 pm: I am in the Congress party, will consult with my supporters and decide the future course of action: Amarinder Singh after resigning as Punjab CM

4:48 pm: I feel humiliated by the way talks transpired. I spoke with the Congress president this morning, told them that I will be resigning today... This is the third time in recent months in meeting MLAs... which is why I decided to quit..:Amarinder Singh after resigning as Punjab CM

4:42pm: CM Captain Amarinder Singh has met Punjab Governor and submitted his and his council of ministers’ resignation. He will address the media at the Raj Bhavan gate in a few minutes from now: Raveen Thukral, Media Advisor to Punjab CM 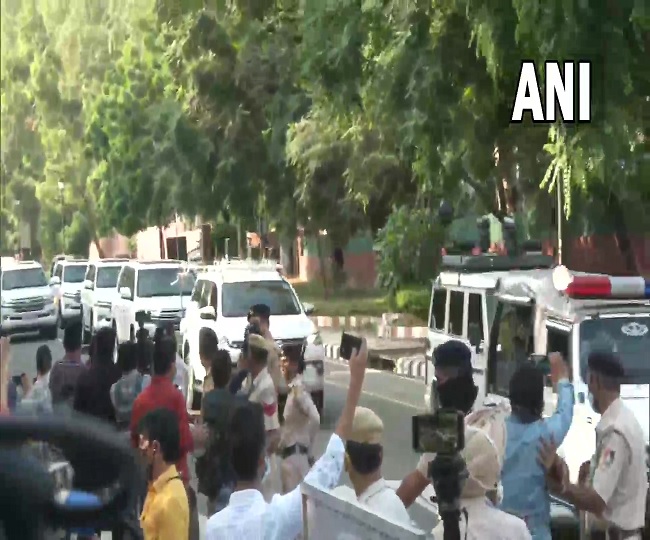 4:15 pm: Haha indeed must go now as I am proud to accompany my father to Raj Bhawan when he submits his resignation as CM of Punjab and leads us as head of our family into a new beginning et all.

Haha indeed indeed must go now as I am proud to accompany my father to Raj Bhawan when he submits his resignation as CM of Punjab and leads us as head of our family into a new beginning et all.

3:30 pm: The meeting between Punjab CM Captain Amarinder Singh and party MLAs who are loyal to him is underway at his official residence in Chandigarh.

3:20 pm: Top sources have also said that Captain Amarinder Singh will resign from Congress. However, the resignation is not expected to come immediately. CM Amarinder had already conveyed about his decision to resign from the party, if told to step down from CM's chair, to top leaders in the Congress.

3:10 pm: Reacting to the meeting of Congress party leaders in Punjab and the ongoing crisis, AAP leader Raghav Chadha said, "The governance in Punjab has been the biggest casualty. Governance and administration in Punjab has come to a grinding hault, because of the ugly war, displaying the greed for power that several faction in the Congress party have."

Punjab Congress general secretary Pargat Singh, when asked about reports that Captain Amarinder Singh has been asked to step down as CM, evaded the question and said that the important topics will be discussed during the CLmeet today evening. "A meeting has been called. Things will be discussed in the meeting", Pargat Singh said as quoted by news agency ANI.

The development comes as several legislators and ministers close to Sidhu have been seeking a meeting of the legislature party. Last month, four ministers and around two dozen party legislators had raised a banner of revolt against the Punjab CM and said that they had no faith in Amarinder Singh's ability to honour unfulfilled promises.