Puducherry Political Crisis: Chief Minister V Narayanasamy on Monday lost the trust vote in the legislative assembly and walked out of the House along with his ministers.

Pondicherry | Jagran Politics Desk: In a massive setback for the Congress, Chief Minister V Narayanasamy on Monday lost the trust vote in the legislative assembly and walked out of the House along with his ministers. Ahead of the trust vote, Narayanasamy blamed former Lieutenant Governor Kiran Bedi and Prime Minister Narendra Modi-led central government over the current political crisis in Puducherry and betraying the people of the union territory (UT).

The floor test was necessary as four Congress MLAs, including former ministers A Namassivayam and Malladi Krishna Rao, have resigned from positions while one lawmaker was disqualified due to "anti-party" activities. Ahead of the floor test, the Congress suffered another setback on Sunday after another party MLA K Lakshminarayanan resigned from his post. With Lakshminarayanan's resignation, the ruling alliance's strength was reduced to 11 in the House where the opposition has 14 MLAs which now has seven vacancies.

13:50 pm: V Narayanasamy submitted the letter of the resignation of the chief minister and his Council of Ministers to LG Dr Tamilisai Soundararajan. 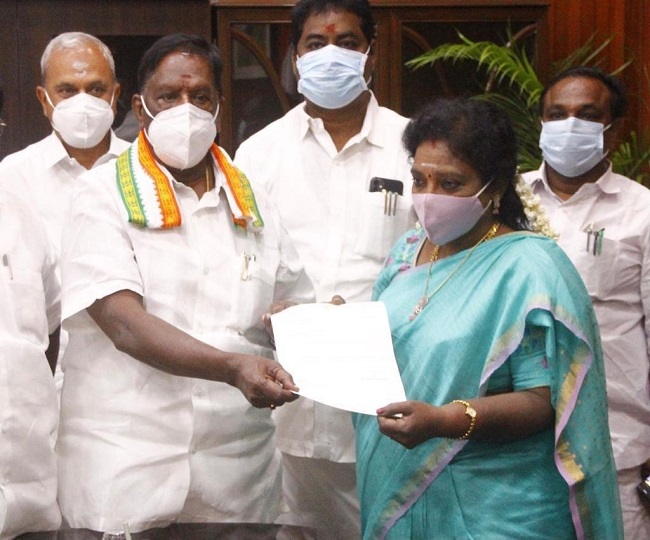 12:58 pm: Meanwhile, the BJP has said that it will not stake a claim to form the government in Puducherry.

"We will not try and form a government at this stage. With the people’s blessings in the forthcoming elections and [Prime Minister Narendra] Modiji’s leadership, the National Democratic Alliance (NDA) will form a government with BJP and its alliance partners All India NR Congress and All India Anna Dravida Munnetra Kazhagam in May and build a new bright future for the people of Puducherry," said BJP state unit president V Saminathan, as reported by Hindustan Times.

12:11 pm: A government elected by the people has been toppled by the BJP, NR Congress and the AIADMK, In the coming elections, the people of Puducherry will teach the opposition parties a lesson, says Narayanaswamy.

12:03 pm: Narayanasamy submits resignation to the Lieutenant Governor after losing majority in the Assembly

11:14 am: MLAs should stay loyal to the party. MLAs who have resigned will not be able to face the people as people will call them opportunists, says Narayanasamy.

10:41 am: "We formed the government with the support of DMK and independent MLAs. After that, we faced various elections. We have won all the by-elections. It is clear that people of Puducherry trust us," says Narayanasamy.

10:33 am: "Kiran Bedi colluding with opposition to try and topple our government. Because of support of my MLAs, we are able complete almost 5 years," says Narayanasamy.

10:30 am: "Our growth rate is 10.2 per cent while growth rate of the nation is minus 7. Our deficit is 1.9 while deficit in most of the states is around 5 per cent," says Narayanasamy.

10:28 am: "My government withstood several attempts to dethrone me as CM. Elected members from Congress party were on the field during Covid-19 pandemic to oversee the efforts of the healthcare authorities and assist them in the treatment and cure of Covid-19 patients while the members of the opposition parties did not even step out of their houses," says Narayanasamy.

9:55 am: V Narayanasamy arrives at the assembly, to face floor test today. 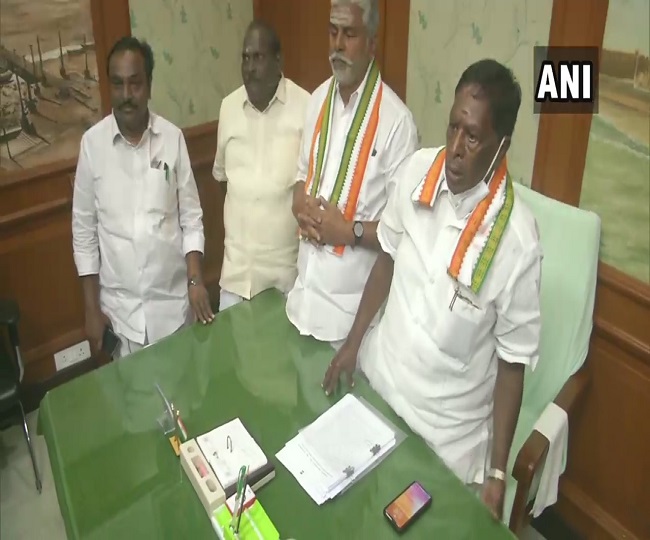 9:45 am: Puducherry Chief Whip RKR Anantharaman says "we are going for the floor test today. Till now, we have the majority".

9:25 am: V Ramachandran, Independent MLA (MAHE constituency), has said that he will support the ruling alliance in the floor test today.

"I am supporting the existing government. I don't want to change my opinion. I think the existing minister will not have majority support in the assembly," he said.

9:23 am: V Narayanasamy leaves for the Legislative Assembly from his residence. 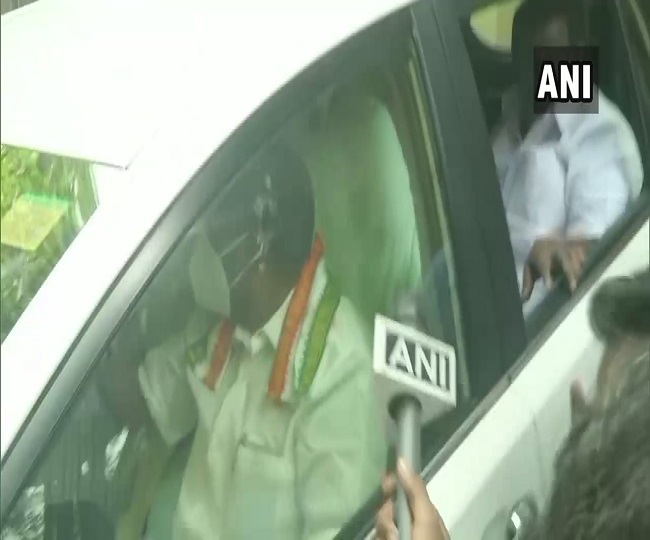 9:10 am: In Puducherry, the ruling alliance has the support of 12 MLAs -- one Independent candidate.

9:05 am: Ahead of the floor test, the Congress leaders will meet today at around 10 am to decide their strategy. They had held a meeting on Sunday too.

"We will meet again and take a final decision before the House convenes at 10 am on Monday," said Narayanasamy earlier.

9:00 am: The crucial floor test that will decide the fate of the V Narayanasamy-led Congress government in Puducherry will be conducted at 5 pm today.