Parliament Winter Session: The opposition is preparing to corner the Centre over the MSP, Pegasus, fuel prices and unemployment. Several opposition parties have also demanded that a women's reservation bill be taken up in the session.

New Delhi | Jagran Politics Desk: The Lok Sabha and Rajya Sabha on Monday passed the bill - Farm Laws Repeal Bill, 2021 - to repeal the three agricultural laws passed by the Parliament last year amid ruckus by opposition MPs. This comes after the Centre announced its decision to revoke the laws, accepting that it is has failed to convince a certain section of the farmers over the act.

Earlier in the day, Prime Minister Narendra Modi said that the government is ready to answer all questions raised by the opposition. However, he stressed that the dignity of the House and chair should be maintained, saying the benchmark should be how the Parliament functions and not how it is disrupted.

Here are the highlights of day 1 of the Parliament Winter Session:

15:27 hours: The House has been adjourned till tomorrow.

15:26 hours: BREAKING: 12 Rajya Sabha MPs have been suspended for indiscipline in the last session of the House.

The fact is that the Central government could not face the strength of the Indian people represented by farmers in this case. The upcoming State elections must have also played on their mind, he added.

13:53 hours: Rajya Sabha Chairman M Venkaiah Naidu today urged members of the House to ensure 'democratic and parliamentary space' to enable a productive Winter Session and lamented the failure on the part of all concerned to introspect over the unruly incidents during the last Monsoon session.

He noted that some MPs weren't present during Constitution Day on November 26 - "The Constitution prescribed dialogue&debate in legislatures for negotiated pathways for development based on the will of people conveyed in succeeding polls to Parliament and state legislatures."

13:21 hours: The government blames us for not letting the House function. But Farm Laws Repeal Bill 2021 was introduced and passed without discussion. Opposition had demanded a discussion on it. Even though the govt has repealed the farm laws, its 'Mann ki Baat' is something else, says Congress' Adhir Ranjan Chowdhury.

13:07 hours: We want that there should be a discussion on the Farm Laws Repeal Bill, 2021. But with the passing of this Bill in Lok Sabha in a haste, they (government) just want to prove that they are in the favour of farmers, says Congress' Mallikarjun Kharge.

13:01 hours: Government of India does not collect data on Bitcoin transactions. No proposal to recognise Bitcoin as a currency in the country, says Ministry of Finance in a written reply in Lok Sabha.

12:29 hours: This (Farm Laws Repeal Bill, 2021 passed by Lok Sabha) is a tribute to all 750 farmers who lost their lives during the agitation. The protest will continue as other issues including MSP are still pending, says BKU leader Rakesh Tikait.

12:00 hours: TMC wanted to have a discussion on Farm Laws Repeal Bill but the government is afraid to discuss the conditions of the farmers. Government is not giving Opposition a chance to speak on behalf of the farmers, says TMC MP Kalyan Banerjee. 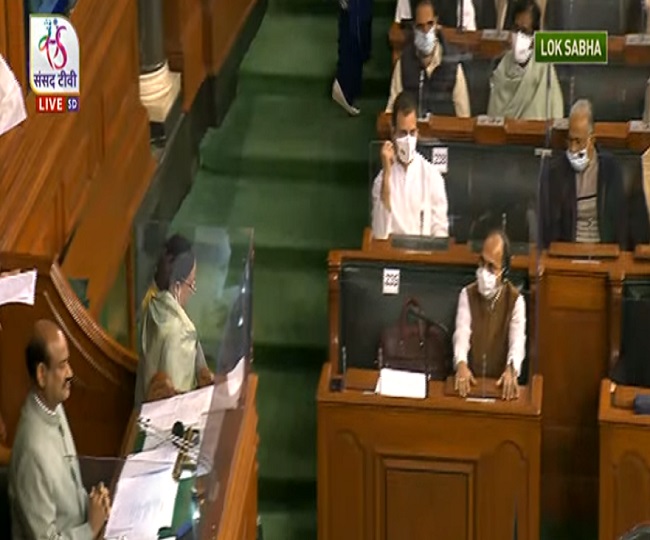 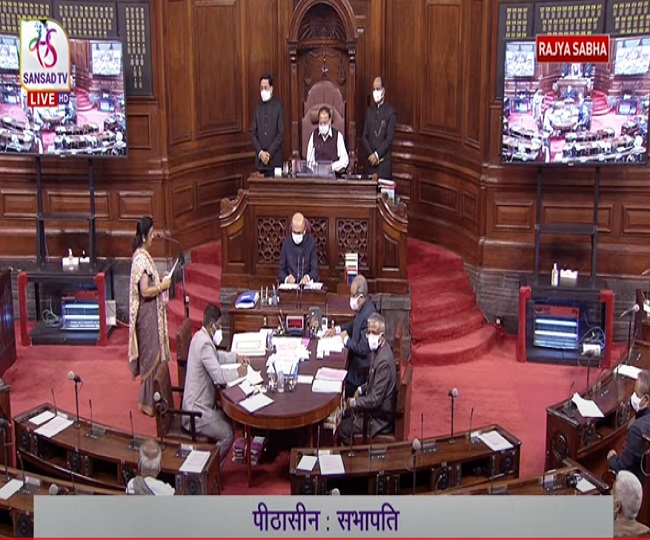 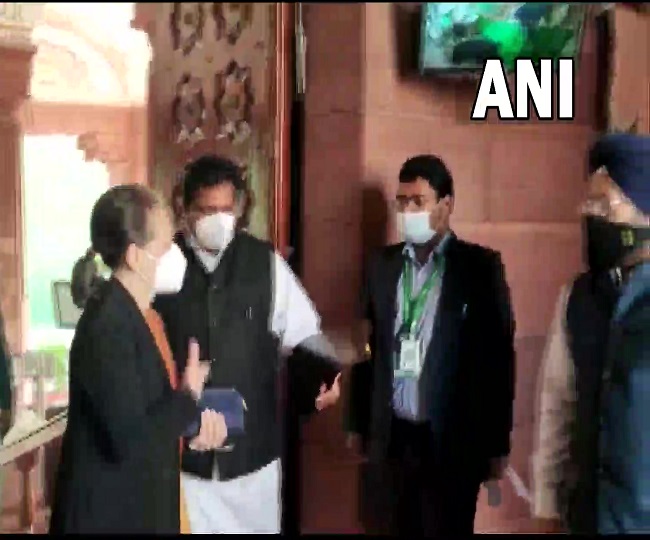 10:36 hours: Our Government is ready to answer all questions during the Winter Session of the Parliament. We should debate in the Parliament, and maintain the decorum of the proceedings, says PM Modi.

10:35 hours: This is an important session of the Parliament. The citizens of the country want a productive session. They are fulfilling their responsibilities for a brighter future, says PM Modi.

10:27 hours: Rajya Sabha MP and CPI(M) leader Elamaram Kareem has given notice under Rule 267 to suspend the business and discuss the "rigging of civic polls in Tripura by the BJP". 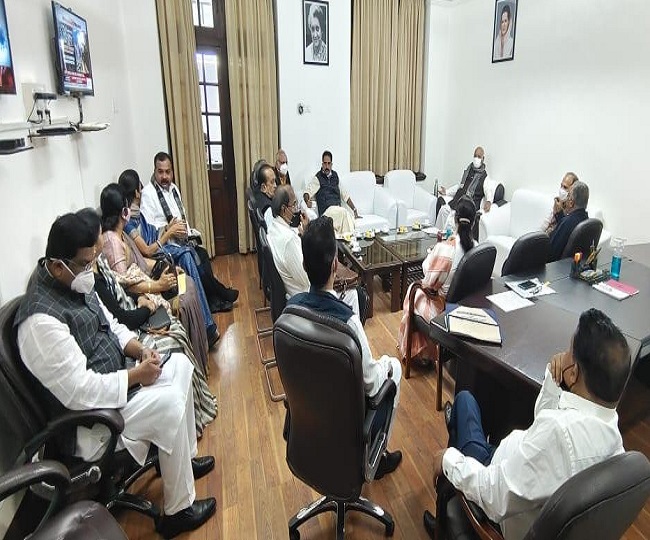 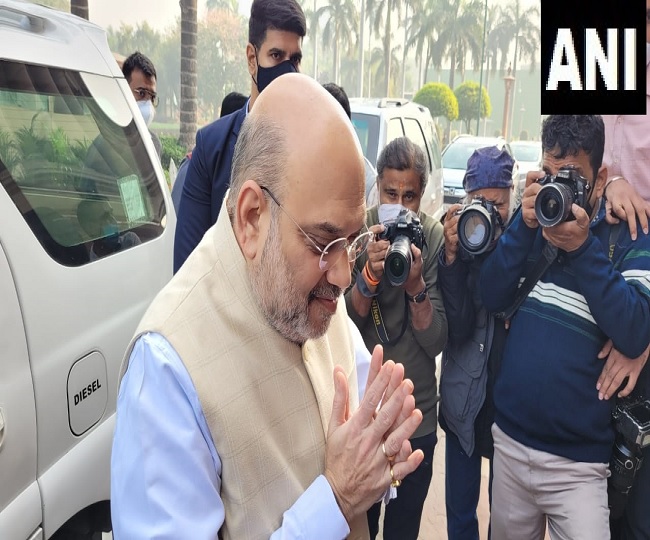 9:10 hours: Congress MP Manickam Tagore gives adjournment motion notice in Lok Sabha 'to direct government to initiate repealing of three farm laws & to announce compensation for families of 700 farmers who had died in the last one year during farmers' protest at Delhi borders'.

9:05 hours: Congress MP Manish Tewari gives adjournment motion notice in Lok Sabha to discuss 'to direct the government to create a record of farmers who lost their lives during farm laws protest and give compensation to their families'.

8:52 hours: Also Read - Jagran Explainer: As PM Modi withdraws 3 farm acts, a look at how a law is repealed in India

8:39 hours: AAP leader Sanjay Singh, however, walked out of the meet, claiming he was not allowed to speak and raise issues related to farmers, especially on MSP.

8:35 hours: However, the opposition leaders said that they wanted to ask more from the prime minister about the farm laws as there were some apprehensions that these legislations might again come in some other form.

8:30 hours: Earlier on Sunday, an all-party meet was held where Union Defence Minister and Deputy Leader of Lok Sabha Rajnath Singh sought cooperation from all parties for productive and smooth functioning of the House.

8:18 hours: Several opposition parties have also demanded that a women's reservation bill be taken up during this winter session of the Parliament.

8:16 hours: The opposition, meanwhile, is preparing to corner the government over MSP, Pegasus, fuel prices and unemployment.

8:13 hours: Meeting of the Business Advisory Committee (BAC) of Lok Sabha will be held today at 10.30 am.

8:04 hours: This comes after Prime Minister Narendra Modi announced that his government will repeal the laws as it has failed to convince a certain section of the farmers over the benefits of the acts.

8:02 hours: On day 1 of the Parliament Winter Session, the Centre will introduce a bill to repeal the three contentious farm laws that were passed last year.