Parliament: Both Houses adjourned till tomorrow as Oppn MPs tear papers over Pegasus report | As it happened

Parliament Monsoon Session: The TMC and other opposition party members rushed into the well of the House as Vaishnaw was called to make a statement over the issue. They shouted slogans and tore papers that appeared to be copies of the statement that the minister was to make.

New Delhi | Jagran Politics Desk: The Parliament on Thursday witnessed a stormy session after opposition targeted the government over the Pegasus reports and the farm laws, forcing both Rajya Sabha and Lok Sabha to get adjourned till Friday morning. Several TMC MPs also tore papers and flung them into the air in Rajya Sabha on Thursday while Union I-T Minister Ashwini Vaishnaw was making his statement on the alleged snooping using an Israeli company spyware Pegasus.

The TMC and other opposition party members rushed into the well of the House as Vaishnaw was called to make a statement over the issue. They shouted slogans and tore papers that appeared to be copies of the statement that the minister was to make.

16:03 pm: Several foreign diplomats resident in India were affected by COVID-19. All possible medical assistance was promptly provided to the diplomatic missions, which requested for such help for their diplomats and family members, MoS (MEA) Rajkumar Ranjan Singh replies in Rajya Sabha.

#WATCH | TMC MP Sukhendu Sekhar Roy evades a question on the MPs of the party snatching away a paper from the hands of IT Minister Ashwini Vaishnaw and tearing it, while he was speaking on 'Pegsus Project' media report in the House. pic.twitter.com/YqZhTgbNJW

14:07 pm: Just In: Lok Sabha has been adjourned till 4 pm amid uproar by the opposition.

13:45 pm: All the projects under the development, redevelopment of Central Vista Master Plan are taken up after following due processes and obtaining necessary clearances, as per extant laws and bye-laws, including Environment Clearance (EC), says Union Minister Hardeep Singh Puri in Lok Sabha.

13:30 pm: Congress MP KC Venugopal moves Privilege Motion against an answer in the Rajya Sabha by MoS (Health) Bharati Pravin Pawar that no one has died because of non-availability of oxygen. 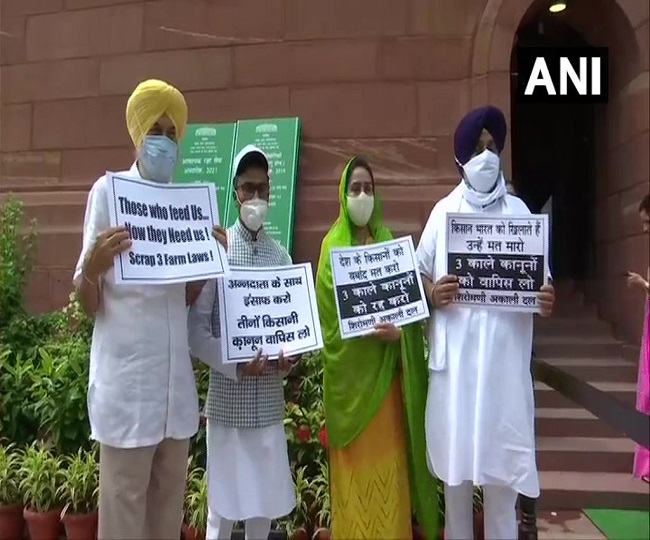 11:45 am: Country has witnessed that these farm laws are beneficial and are in favour of farmers. We have had discussions about these laws. If they express their issues with the laws point-wise, we can discuss it, says Union Agriculture Minister Narendra Singh Tomar

11:39 am: A total of 1,734 cases of Mucormycosis has been reported in Delhi, says MoS (Health) Dr Bharati Pravin Pawar in Rajya Sabha.

11:34 am: Congress leader Rahul Gandhi staged a protest along with party MPs in front of Gandhi Statue against farm laws. 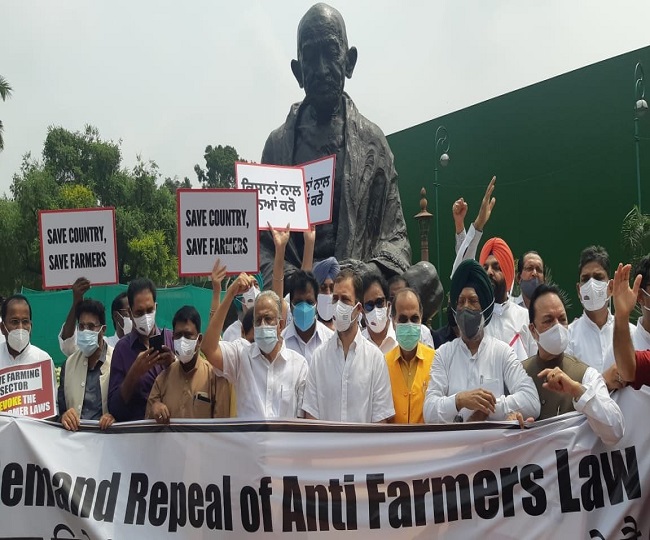 11:30 am: Just In Lok Sabha has been adjourned till 12 noon amid uproar by the opposition

11:11 am: Just In: Rajya Sabha has been adjourned till 12 noon amid uproar by the opposition. 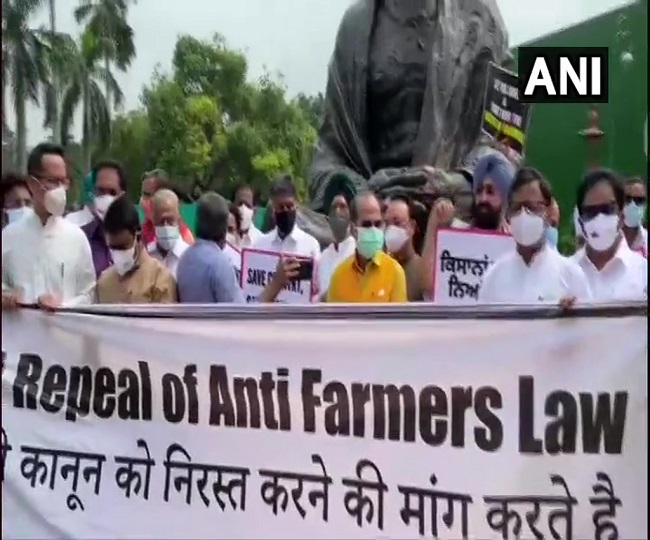 10:40 am: 10:45 am: One can only ask for clarification if the statement is given and government is doing the same. Not all members will be able to speak. It is an attempt to scuttle down and save themselves and not allowing other members to speak (on the Pegasus issue), says Congress' Mallikarjun Kharge.

10:08 am: Congress Lok Sabha MP Manish Tewari has given Adjournment motion notice in the House over Pegasus issue.

10:04 am: Congress MPs Deepender Singh Hooda and Pratap Singh Bajwa have given a Suspension of Business notice under rule 267 on the issue of farmer's agitation.

9:32 am: AAP MP Bhagwant Mann has moved an adjournment motion again for withdrawal of farm acts.

8:57 am: Congress MP Manickam Tagore has given adjournment motion notice on the issue of discussion about prolonged agitation of farmers' against anti-farmers Bill and direct government to withdraw it.

7:53 am: Just In: CPI Rajya Sabha MP Binoy Viswam moves privileged motion notice against an answer in the Rajya Sabha by Minister of State Bharati Pravin Pawar that no one has died because of non-availability of oxygen.

7:49 am: Meanwhile, around 200 farmers will be holding protests at the Jantar Mantar from today after nod from the Delhi government. The farmers have said that their protest will continue till the end of the monsoon session of the Parliament.

7:42 am: Congress' Rajya Sabha MP KC Venugopal will also move a privilege motion against the Centre's remark over oxygen shortage at around 10 am today.

7:35 am: The Parliament is all set to witness a stormy session today as the opposition is all set to corner the government over the "no COVID-19 deaths due to oxygen shortage" remark and farmers' protest.