The coronavirus crisis, economic devastation, and the border row with China are some of the key issues likely to dominate as the monsoon session of Parliament begins today (September 14).

New Delhi | Jagran News Desk: Coronavirus crisis, economic devastation, and the border row with China are some of the key issues likely to dominate as the monsoon session of Parliament begins today (September 14). The session is expected to be a stormy one as MPs from Congress and TMC have given notices in Lok Sabha over the latest revelation of Chinese snooping. According to a report, China is monitoring over 10,000 Indians in real-time in what the country calls it "hybrid warfare". The issue is likely to be raised by the MPs today. Besides, the government has listed 47 items, including 45 bills and two other financial items, for the monsoon session which will end on October 1.

Below are the highlights of the day 1 of Parliament Monsoon Session:

17:41 pm: There have been 3,186 incidents of ceasefire violations along LoC in Jammu region between Jan 1 and Sept 7 this year. In addition, 242 incidents of cross-border firing have occurred along Indo-Pak border in Jammu till Aug 31 this year, says MoS Defence Shripad Naik in Rajya Sabha

17:36 pm: The respect I hold for Harivansh ji, each member of the House shares. He has earned this respect. His unbiased role in the Parliament strengthens our democracy: Prime Minister Modi in Rajya Sabha on the election of Harivansh as Rajya Sabha Deputy Chairman

17:24 pm: I declare that Harivansh ji has been chosen as the deputy chairman of the Rajya Sabha: Rajya Sabha Chairman M.Venkaiah Naidu

A voice vote was conducted for the election of Rajya Sabha deputy chairman.

15:57 pm: Rajya Sabha adjourned for one hour till 4:40 pm in the honour of the departed souls: Rajya Sabha Chairman M Venkaiah Naidu 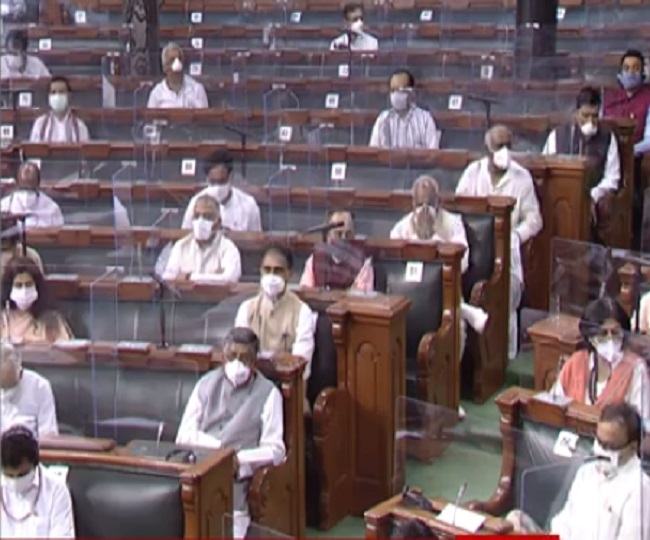 Pens used by MPs to sign being changed after every use, in view of #COVID19. pic.twitter.com/AeGskIipH7

Rajya Sabha proceedings begin on the first day of #MonsoonSession.

The session began with Lok Sabha assembling in the morning. pic.twitter.com/STbK6BooPs

He was put under detention after the abrogation of Article 370 in August last year and was released on 13th March. pic.twitter.com/KB6cyQSepI

12:59 pm: Commenting on personal attire...Being a senior member, what is he talking? He should apologise unconditionally. It is an insult to womenfolk: Parliamentary Affairs Minister Pralhad Joshi on TMC MP Saugata Roy's remark on FM Sitharaman in Lok Sabha

12:35 pm: Will give 'unequivocal message' that India stands with its soldiers: PM Modi

12:22 pm: Agriculture minister Narendra Singh Tomar says there will be no changes in MSP

11:38 am: This is a global scenario and we're not the only country going through it. But it should be priority of govt. I don't see this govt at the Centre talking extensively either about the economy or unemployment challenges. We should put it on priority: NCP's Supriya Sule

11:12 am: Problem of drug trafficking or addiction is on a rise. Conspiracy is being hatched to destroy country's youth, our neighbouring countries are contributing. Smuggling of drugs from Pakistan and China is done every year - it is brought via Punjab and Nepal, says BJP MP Ravi Kishan

Drug addiction is in film industry too. Several people have been apprehended, NCB is doing very good work. I urge central govt to take strict action, apprehend the culprits soon, give them befitting punishment and bring an end to conspiracy of neighbouring countries, he adds

10:58 am: I'd like to draw the attention of this House and the govt to the plight of 12 students who had committed suicide - all from rural background - because of NEET exam. They had passed plus 2 through state board and NEET is conducted only in CBSE syllabus, says DMK MP TR Baalu

Within a month after plus 2 result, they have to enter into NEET exam and they are clueless. Without knowing any subject matter of CBSE syllabus, they are helpless and committing suicide. Future doctors of India have committed suicide, he adds

10:54 am: Leaders of most parties agreed over no Question Hour and Zero Hour for 30 minutes. We apprised you (Speaker) of it following which decision was taken by you. I appeal to all members of House to co-operate as Session is being held in extraordinary situation, says Defence Minister Rajnath Singh

10:53 am: It's extraordinary situation. When Assemblies aren't ready to meet for a single day, we -with around 800-850 MPs- are meeting here. There are so many ways to question the govt, govt isn't running away from discussion. We're ready for discussion, says BJP's Pralhad Joshi

10:44 am: Question Hour is the golden hour but you say that it can't be held due to the circumstances. You conduct the proceedings but single out Question Hour. You are trying to strangulate the democracy, says Congress' Adhir Ranjan Chowdhury

10:30 am: The entire country has stood by the Army irrespective of whose government is at the Centre and will always do the same: Shiv Sena's Rajya Sabha MP Sanjay Raut

10:05 am: "The government is accountable to Parliament. When have they reported to us on talks between Defence and Foreign Ministers (of India and China)? The nation needs to be taken into confidence by the government. Question of support for military beyond debate we're very strongly with our Army," says Shashi Tharoor.

09:40 am: Tamil Nadu: DMK MLAs arrive at the state legislative assembly, wearing masks with 'Ban NEET, save TN students' printed on them. Party's MPs staged a protest at the Parliament premises in Delhi this morning, demanding that NEET exam be scrapped.

Party's MPs staged a protest at the Parliament premises in Delhi this morning, demanding that NEET exam be scrapped. pic.twitter.com/XewHv7gWp9

08:58 am: Dravida Munnetra Kazhagam (DMK) MPs TR Balu and Kanimozhi stage protest against NEET examination in the Parliament premises ahead of the Monsoon Session commencing today.

08:55 am: Jab tak dawai nahi tab tak koi dhilai nahi. We want that a vaccine be developed at the earliest from any corner of the world, our scientists succeed and we succeed in bringing everyone out of this problem: Prime Minister Narendra Modi

08:50 am: I believe that all members of the Parliament will give an unequivocal message that the country stands with our soldiers: Prime Minister Narendra Modi

08:45 am: Parliament session is beginning in distinct times. There's Corona and there's duty. MPs chose the path to duty. I congratulate & express gratitude to them. This time RS-LS will be held at different times in a day. It'll be held on Saturday-Sunday too. All MPs accepted this: PM Modi