Catch all the LIVE Updates

The government on Monday pushed its legislative agenda in Lok Sabha as the House passed two bills amid uproar by opposition members over the Pegasus row and farmers issue. These are the first two bills to be passed by Lok Sabha in the Monsoon session which began on July 19. The House has seen repeated disruptions over the alleged Pegasus spying allegations, fuel price hike and three new agri laws since the session started. As soon as the House met at 3 pm after repeated adjournments during the day, Lok Sabha took up the Factoring Regulation (Amendment) Bill, 2020, and the National Institutes of Food Technology, Entrepreneurship and Management Bill, 2021, separately.

2:20 pm: Govt has to accept our demand for discussion & SC-monitored probe (into 'Pegasus Project' report). We're doing our duty to prevent Govt from converting democracy into surveilling state. Govt doesn't want to give answers. We've no option but to continue to agitate: Anand Sharma

2:10 pm: Parliament is not convened only for the legislative agenda of Govt but it is meant to raise issues of national importance. Govt is misleading the country by saying that they are ready to talk to the Opposition: Congress leader Anand Sharma

1:45 pm: Dictatorship is prevailing in the country. Modi Ji is not ready to solve issues in a democratic manner. We are ready for discussions. Govt should call an all-party meeting... We all are going to fight on this issue: LoP in Rajya Sabha, Mallikarjun Kharge

1:40 pm: IT Act says permission is needed for surveillance. This Govt gave permission (for alleged snooping via Pegasus) & is involved in snooping on judges, Army officers, journalists & Opposition leaders. No democracy in the world would do it: LoP in Rajya Sabha Mallikarjun Kharge

1:10 pm: As reported by Delhi Police, 9 cases were registered and 34 persons were arrested under UAPA during the year 2020. Disclosure of further details of cases may not be in a larger public interest as the same may impact the cases: MoS MHA Nityanand Rai in Lok Sabha

12:55 pm: There has been a decrease in the naxal activities/Left Wing Extremism activities in the country in last 3 years: MoS MHA Nityanand Rai in Lok Sabha

12:41 pm: Due to outbreak of #COVID19 and flood situation, the process of issuing rejections slips (to those excluded from the final NRC) has been postponed: MoS MHA Nityanand Rai in Lok Sabha

12:35 pm: There have been some reports of CPI (Maoist) inducting children in their outfit in Jharkhand & Chhattisgarh, using them for cooking, carrying daily use material & collecting info regarding movement of security forces. They are also imparted military training: MoS MHA in Lok Sabha

12:20 pm: Congress MP Shaktisinh Gohil has given Suspension of Business notice under rule 267 in Rajya Sabha to have a discussion in the presence of Prime Miniter or Union Home Minister on 'Pegasus Project' media report.

12:00 pm: PM said in 2047 when we'll complete 100 years of Independence, we've to collect ideas from people on how we can achieve the best benchmarks & create an Action plan for the next 25 years: Arjun Ram Meghwal

11:55 am: PM spoke about Azadi ka Amrit Mahotsav. PM said that people have blessed us and it is an opportunity to inculcate the feeling of serving the country in people. MPs were told that they too had to ensure everyone is connected to it: MoS for Parliamentary Affairs, Arjun Ram Meghwal

11:45 am: Leaders of parties have voiced their concerns to me over the ongoing sorry state of affairs and for being deprived of raising issues of public concerns. I appeal to all of you to rethink this attitude: Rajya Sabha Chairman M Venkaiah Naidu before the adjournment

11:40 am: I am concerned about the media reports that some sections of the House are determined not to allow the House to function for the remainder of the session. Parliament is meant for making laws and to discuss public issues: RS Chairman M Venkaiah Naidu before the adjournment

11:35 am: Rajya Sabha adjourned till 12 noon amid sloganeering by Opposition MPs for a discussion on the 'Pegasus Project' report

11:30 am: Lok Sabha adjourned till 11.45 am amid sloganeering in the House by Opposition MPs.

11:25 am: After Union Ministers Pralhad Joshi & V Muraleedharan briefed BJP Parliamentary Party meeting on what happened in Lok Sabha & Rajya Sabha in the past week, PM Modi asked party MPs to expose Opposition as it isn't coming to the meetings or letting the House conduct any business

11:20 am: Opposition MPs continue sloganeering in Rajya Sabha, demanding a discussion on the 'Pegasus Project' report

11:10 am: I've submitted an adjournment motion on this issue (Assam-Mizoram border clash) & separately written a letter to the Home Minister demanding an enquiry: Deputy Leader of Congress in Lok Sabha, Gaurav Gogoi

11:00 am: B/w Aug 15, 2022 & Aug 15, 2023, 2 workers will be handpicked to visit 75 villages per Assembly constituency. They'll spend 75 hrs in each village to collect ideas & noteworthy initiatives which will be collated further for development of the country: Union Min Arjun Ram Meghwal

10:50 am: Delhi: BJP Parliamentary Party meeting is underway at Parliament on the Opposition's attempts to stall business during the monsoon session 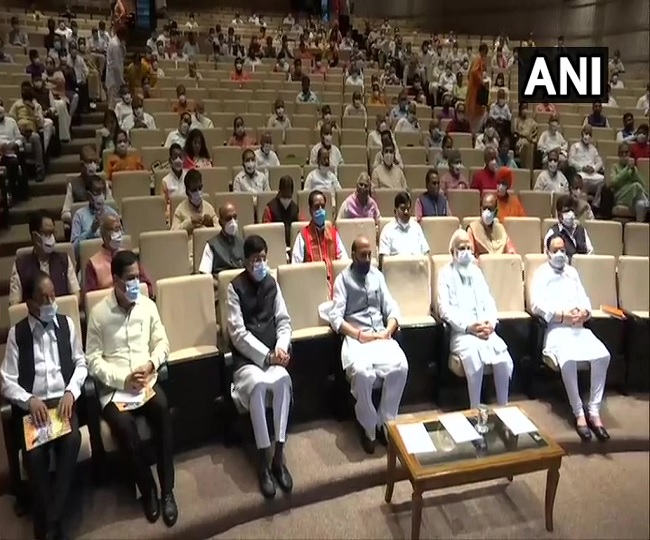 10:40 am: We had discussions with Opposition leaders & said that we're ready for discussion on whichever topic they want. We hope that Opposition will give notice & let Chairman & Speaker decide under which rule & when should it happen: Deputy Leader of House in RS, Mukhtar Abbas Naqvi

10:30 am: Some media reports say LMG was used (during the Assam-Mizoram border clash yesterday). Are we in our country or on the borders of the country? We demand an enquiry into this incident: Deputy Leader of Congress in Lok Sabha, Gaurav Gogoi

10:20 am: Delhi: Deputy Leader of Congress in Lok Sabha, Gaurav Gogoi gives an adjournment motion notice to discuss the Assam-Mizoram border clash, which claimed the lives of 6 police personnel yesterday 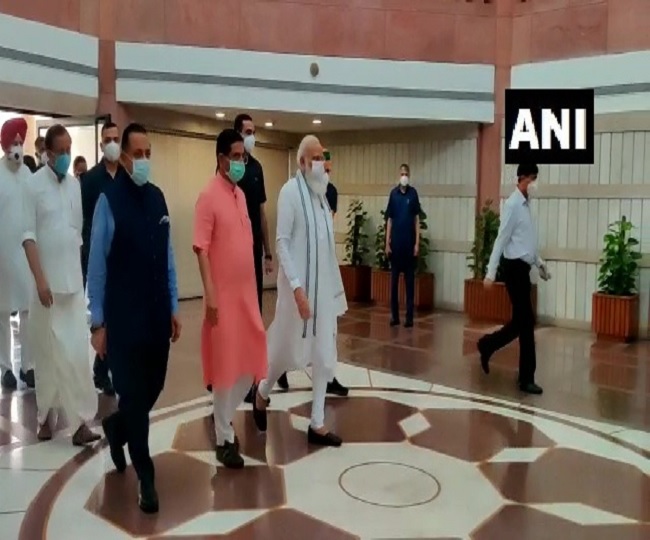 9:20 am: Congress MP Manickam Tagore has given adjournment motion notice in Lok Sabha for a discussion on the 'Pegasus Project' report in the presence of PM Narendra Modi

8:00 am: Lok Sabha on Monday passed the Factoring Regulation (Amendment) Bill, 2020, and the National Institutes of Food Technology, Entrepreneurship and Management Bill, 2021,.

7:45 am: A meeting of BJP Parliamentary Party will be held at 9.30 am on Tuesday, the 27th July 2021 in the GMC Balayogi Auditorium of Parliament Library Building (PLB)