New Delhi | Jagran Politics Desk: The ruckus in the Parliament continued on Monday with the opposition attacking the Centre over the farm laws and Pegasus media report. However, amid the chaos, the Lok Sabha passed two crucial Bills -- The Factoring Regulation (Amendment) Bill, 2021 and National Institute of Food Technology Entrepreneurship and Management Bill, 2021 -- on Monday. The functioning of both the Houses will now resume on Tuesday at 11 am.

15:28 pm: Just in: Lok Sabha adjourned till tomorrow amid uproar by opposition members.

15:21 pm: Government reduced basic customs duty on Masur dal to nil and halved Agriculture infrastructure Development Cess on the lentil to 10 per cent. Basic customs duty reduced from 10 per cent to nil on lentils (Masur) originated in or exported from countries other than the USA, says Union Finance Minister Nirmala Sitharaman in Lok Sabha.

15:10 pm: Government has not mentioned 'Pegasus' in this week's agenda items. Also, they don't want to speak in the Lok Sabha on COVID management, vaccine policy, and hike in fuel prices, says Congress' Shashi Tharoor.

14:35 pm: Don't know if it's wrong or right but friends told me that a serious discussion is being held on a proposal to increase the strength of the Lok Sabha to 1000 or more before 2024. Architectural plan of New Parliament Chamber should be tabled at Parliament, says Congress' Manish Tewari.

14:00 pm: Rajya Sabha adjourned till 3 pm for the third time today amid ruckus by Opposition MPs over 'Pegasus Project' report.

13:31 pm: Through Pegasus, everyone including judiciary and civic society has been under surveillance. We expected that during Parliament, Centre will investigate under SC supervision, but they didn't. West Bengal is the first state to initiate a commission of enquiry, says West Bengal Chief Minister Mamata Banerjee.

13:15 pm: They don't want to go by the rules of the constitution. You (government) are snooping on everyone including army officials, journalists and election commissioners. I'm glad that all party leaders have decided to raise this issue together, says Rajya Sabha Leader of Opposition Mallikarjun Kharge.

11:45 am: Delhi Police detains Congress General Secretary Randeep Surjewala, Youth Congress chief Srinivas BV, and some party workers for taking out a tractor march in violation of Section 144 of CrPC. 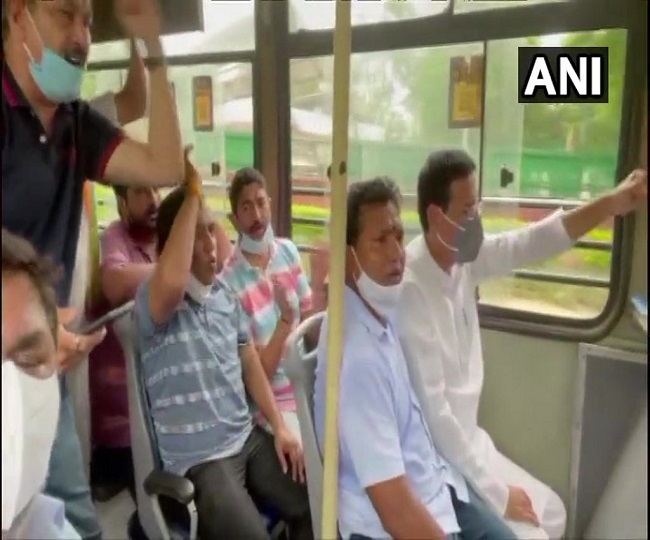 11:31 am: I'm extremely happy to inform you that Mirabai Chanu won a silver medal in Tokyo Olympics. I congratulate her on behalf of the House and myself. I hope that other athletes will also perform well in their respective games and bring laurels to the nation, says Lok Sabha Speaker Om Birla.

11:27 am: Shiromani Akali Dal and BSP MPs protest at Parliament against farm laws. 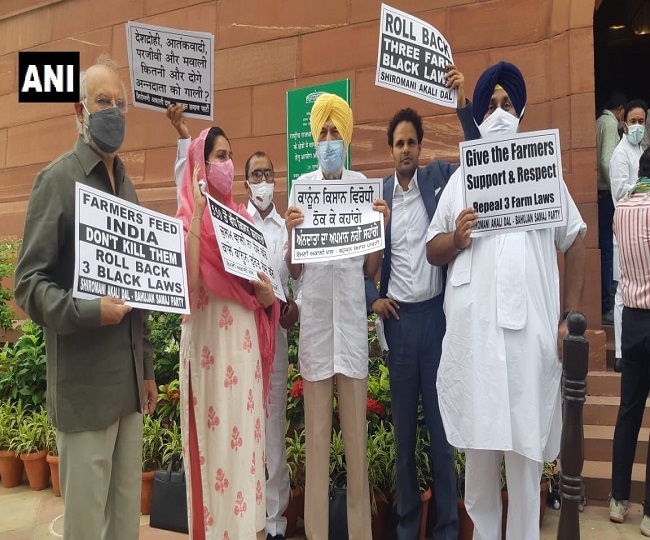 11:22 am: Just In: Rajya Sabha adjourned till 12 noon following sloganeering by Opposition MPs demanding a discussion on 'Pegasus Project' report. 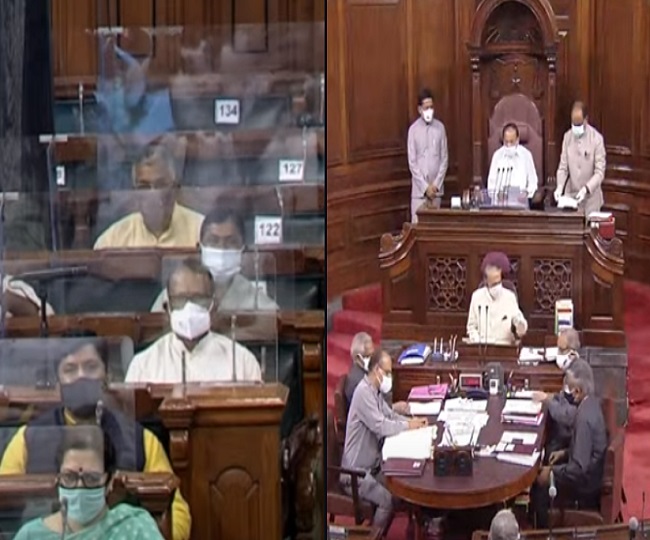 11:12 pm: Rajya Sabha members pay tribute to the martyrs of the Kargil War. 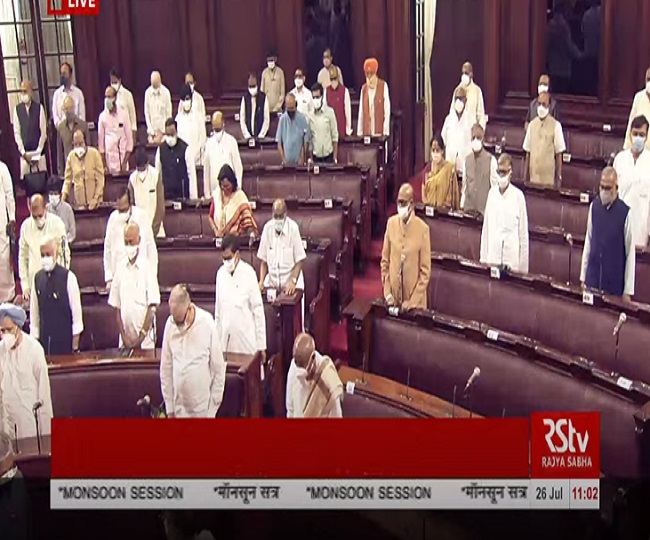 11:10 am: Lok Sabha members pay tribute to the martyrs of the Kargil War. 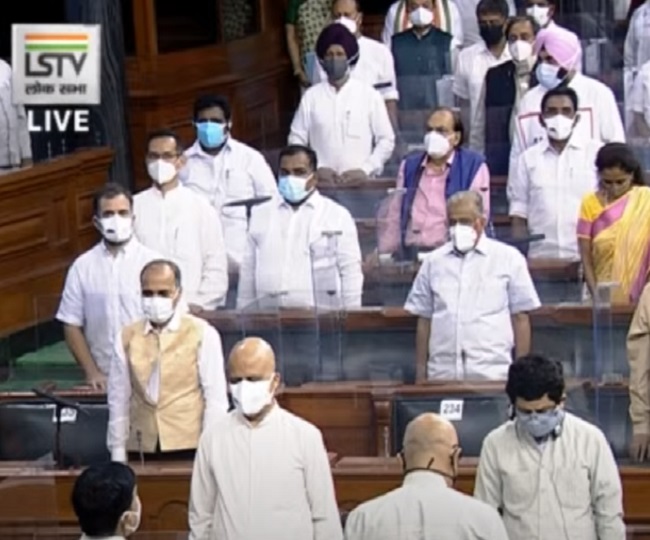 11:05 am: I've brought farmers' message to Parliament. They (Govt) are suppressing voices of farmers and not letting a discussion take place in Parliament. They'll have to repeal these black laws. The entire country knows these laws favour 2-3 big businessmen, says Rahul Gandhi.

As per Government, farmers are very happy and those (protesting farmers) sitting outside are terrorists. But in reality, farmers' rights are being snatched away, he added.

11:00 am: Congress leader Rahul Gandhi drives a tractor to reach Parliament in protest against farm laws. 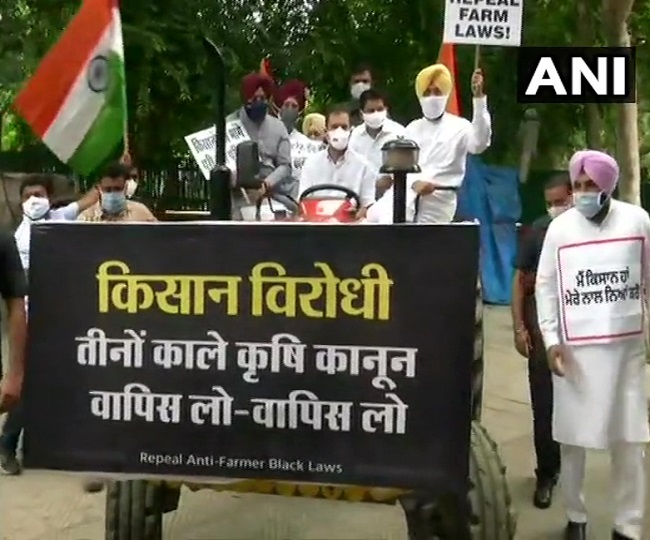 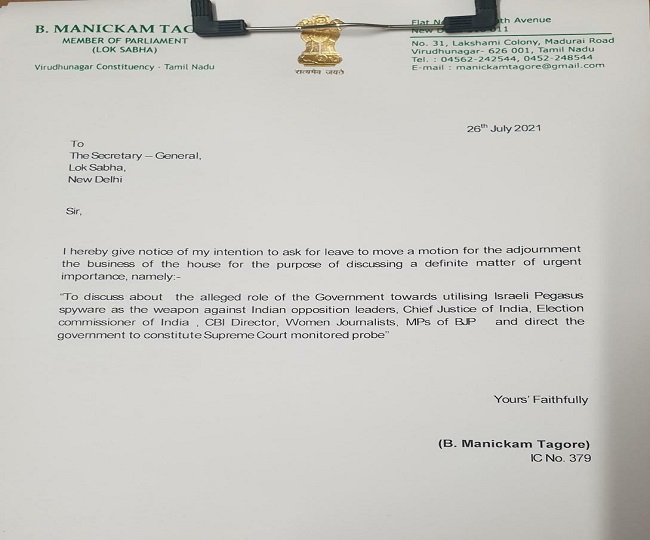 8:45 am: Congress MP Manickam Tagore gives adjournment motion notice in Lok Sabha to discuss the alleged usage of Pegasus spyware by the Government.

8:30 am: Bills that will be tabled in the Rajya Sabha today:

* The Juvenile Justice (Care and Protection of Children) Amendment Bill, 2021

8:15 am: Bills that will be tabled in the Lok Sabha today:

* The National Institutes of Food Technology, Entrepreneurship and Management Bill, 2021

8:00 am: Parliament all set to resume its functioning today. However, the opposition is once again expected to disrupt the functioning of the Parliament, questioning the Centre over farm laws and Pegasus report.