Earlier today, Congress MP Manickam Tagore has given an adjournment motion notice in Lok Sabha to discuss the 'Pegasus Project' media report. For the last few days, the business of both the Houses of the Parliament remained majorly disrupted due to the continuous ruckus created by the Opposition over issues including farmers' protest, Pegasus spyware, COVID-19 and inflation. The Monsoon Session commenced on July 19, 2021, and will continue till August 13, 2021.

3:30 pm: There have been six incidents of ceasefire violation/cross border firing in Jammu and Kashmir by Pakistan, during April-June 2021: Ministry of Home Affairs (MHA) in Lok Sabha

2:45 pm: Rajya Sabha adjourned till 11 am tomorrow amid continued sloganeering by opposition MPs in the House

2:31 pm: Delhi | Regarding Opposition&Rahul Gandhi, LS doesn't have any space for misbehavior. PM has asked the opposition to conduct debates. But they're not ready. It's like Farmers Union that doesn't have a proposal but are creating ruckus: Narendra Singh Tomar, Agriculture Min

2:27 PM: Chairman M Venkaiah Naidu discussed the stalemate in the House with Leader of the Opposition in Rajya Sabha, Mallikarjun Kharge after the first adjournment of the House today: Sources

2:10 pm: Whenever any inputs pertaining to use of foreign donations to spread terror activities are received by this Ministry, appropriate action under The Foreign Contribution (Regulation) Act, 2010 and other extant laws and rules is taken: Ministry of Home Affairs (MHA) in Lok Sabha

2:05 pm: Details of the voluntary organisations not registered under The Foreign Contribution (Regulation) Act, 2010 are not maintained by this Ministry: Ministry of Home Affairs (MHA) in Lok Sabha

2:00 pm: Presently no such proposal is under consideration: Ministry of Home Affairs (MHA) in Lok Sabha on whether the Government has any proposal to bifurcate any State in the country including Tamil Nadu

1:35 pm: Movement of pilgrims through the Kartarpur Corridor was suspended in March 2020 due to #COVID19 pandemic. Furthermore, Pakistan's National Command and Operations Centre has banned all travel from India citing a surge in COVID cases in India since April 2021: MoS Home in Lok Sabha

1:20 pm: A National Population Policy was formulated in 2000 with the long-term objective of attaining population stabilization by 2045. Several initiatives have been taken under the National Family Planning Program, providing a broad range of services: MoS Home Nityanand Rai in Lok Sabha

1:16 pm: OCI Cardholders are not required to carry their old passports while travelling to/from India. They are allowed to travel on the strength of their existing OCI Cards bearing old passport number along with the new passport: MoS Home Nityanand Rai in Lok Sabha

1:05 pm: Parliamentary Standing Committee on Labour in their 25th report has recommended that the Government should explore ways and means to put money in the bank accounts of the informal workers during adverse conditions like #COVID19: Lok Sabha Secretariat

12:30 pm: Delhi Police has reported that an SIT of Crime Branch has been constituted to investigate three cases registered at Police Station Vasant Kunj (North) regarding violence in JNU Campus in Jan 2020: MoS Home Nityanand Rai in Lok Sabha

12:27 pm: The investigation conducted inter-alia includes the examination of witnesses, collection and analysis of footage and examination of identified suspects. As reported by Delhi Police, no arrest has been made in these cases: MoS Home Nityanand Rai in Lok Sabha

12:20 pm: There's no separate Public Service Commission in Puducherry as it does not come under the definition of 'State', in so far as Article 315 (1) of Constitution is concerned: MoS Home Nityanand Rai in Lok Sabha on any plan to set up separate public service commission for Puducherry

11:45 am: Lok Sabha adjourned till 12 pm following a ruckus by Opposition MPs, who are protesting in the House over different issues.

11:30 AM: Rajya Sabha adjourned till 12 pm amid uproar in the House. Opposition MPs gathered at the Well of the House, protesting over various issues.

11:07 am: PM also mentioned that we will leave no stone unturned to fulfill commitment to the people. PM spoke about e-Rupi. It'll have a targeted and purpose-specific benefit for people. Many schemes are sometimes used for some other purpose but e-Rupi will resolve it: V Muraleedharan

11:03 am: Parliament is being insulted by the acts of opposition in both the Houses. The person who snatched the paper and tore it is not repentant of his acts. Comments made by a senior MP regarding the passage of Bills is derogatory: Union Minister V Muraleedharan

11:01 am: PM started with happy news that July has brought in. We had Rs 1.16 lakh cr GST collection. News from Tokyo Olympics, whether it's bronze by PV Sindhu or achievements of hockey teams, has come in July: Union Minister V Muraleedharan after BJP parliamentary party meet

10:55 am: Y'day, a tweet was posted by TMC (MP Derek O'Brien). PM said it is an insult to people who elected MPs. PM expressed anguish. '...Making papri chaat' was an insulting comment. Tearing of papers, throwing them & not apologising is arrogance is what PM said: Union Min Pralhad Joshi 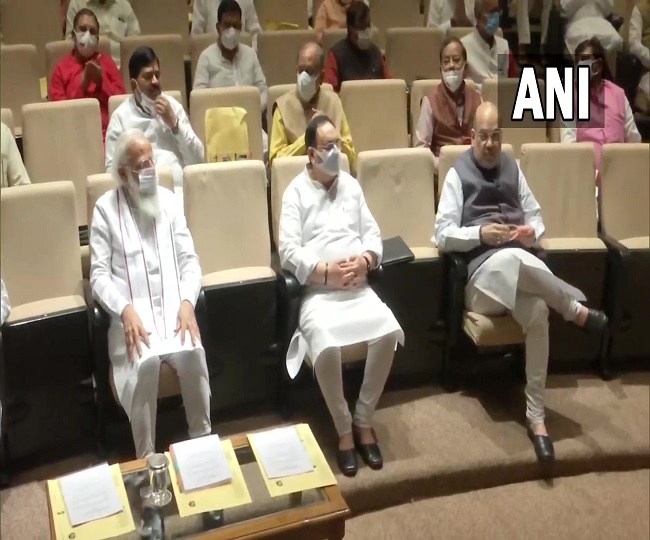 10:45 am: Delhi: Congress leader Rahul Gandhi and other Opposition leaders ride bicycles to the Parliament, after the conclusion of their breakfast meeting.

#WATCH | Delhi: Congress leader Rahul Gandhi and other Opposition leaders ride bicycles to the Parliament, after the conclusion of their breakfast meeting. pic.twitter.com/5VF6ZJkKCN

10:40 am: Rahul Gandhi knows Pegasus is a threat for not only an individual but country. If anyone is spying on constitutional rights of privacy & expression, it's a serious concern. Oppn wants discussion but Centre is not letting us. Centre should come clean: Arvind Sawant, Shiv Sena

10:35 am: Single most important thing in my view is that we unite this force. The more this voice (of the people) unites, the more powerful this voice will become, the more difficult it'll become for BJP-RSS to suppress it: Congress leader Rahul Gandhi at meeting with opposition leaders.

10:10 am: Opposition Party floor leaders from Lok Sabha & Rajya Sabha arrive for a breakfast meeting being hosted by Congress leader Rahul Gandhi at Constitution Club. Strategy for Monsoon session to be discussed. 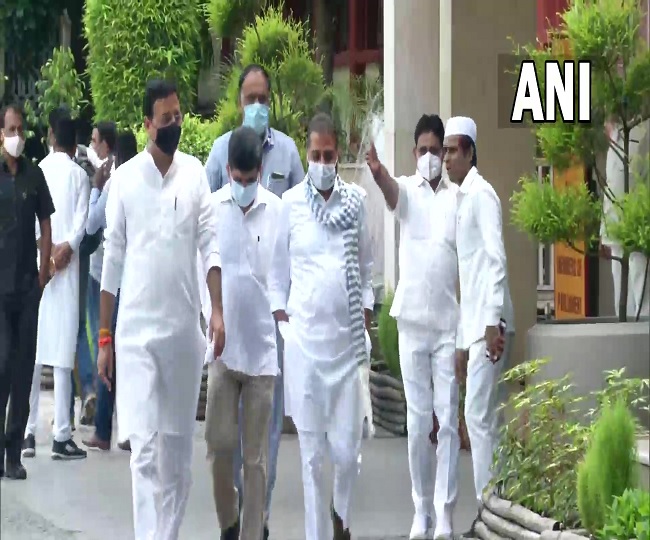