Parliament Monsoon Session: According to a report by Dainik Jagran, the Centre is also mulling ending the monsoon session "prematurely", looking at the "opposition's unity" against it over the Pegasus report.

New Delhi | Jagran Politics Desk: Both Houses of the Parliament -- Lok Sabha and Rajya Sabha -- will assembly once again on Monday after the washout. However, the Parliament is expected to witness another stormy session as opposition might once again target the government over the Pegasus snooping charges. The opposition, led by the Congress, wants to have a debate over the Pegasus report and wants Prime Minister Narendra Modi and Union Home Minister Amit Shah to be a part of the discussions.

However, the government is not keen on a discussion over the Pegasus report and wants to have debates over topics related to the common man. According to a report by Dainik Jagran, the Centre is also mulling ending the monsoon session "prematurely", looking at the "opposition's unity" against it over the Pegasus report.

16:53 pm: This morning, Defence Minister Rajnath Singh called Leader of Opposition in Rajya Sabha Mallikarjun Kharge &sought his cooperation in running the House. Opposition leaders said the government should discuss issues raised by them and then they are ready to cooperate with government in running the parliament, reports ANI.

14:04 pm: BJP MPs from North East have met PM and submitted a memorandum on various issues pertaining to the region including Assam-Mizoram border row.

It states, "Series of confidence-building measures have taken place over last few days. Yet actions of Congress remain as devious and mischievous".

13:30 pm: Opposition Party floor leaders from Lok Sabha and Rajya Sabha to meet tomorrow in Delhi to discuss strategy for Monsoon session. Rahul Gandhi to attend the meet, few Opposition parties are of the view that a mock Parliament session should be convened, decision after the meet, says ANI sources.

12:55 pm: MPs from Rajasthan hold discussions on various developmental projects in the state. 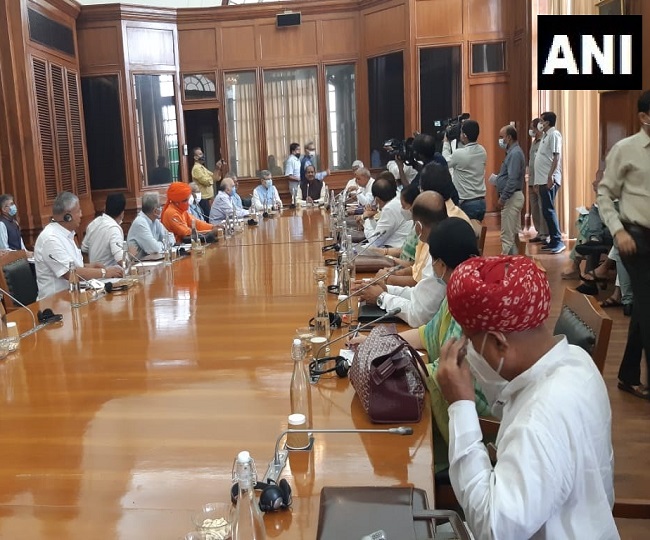 12:14 pm: Lok Sabha adjourned till 2 pm amid uproar by Opposition MPs, demanding a discussion on the 'Pegasus Project' media report.

12:09 pm: This is being discussed not only in the country but across the world. Snooping matter isn't an issue for our country alone. Governments of Israel, France, Hungary US and European nations are investigating it. Why is PM Modi scared, says Congress' Adhir Ranjan Chowdhury.

11:42 am: Just In: Lok Sabha adjourned till 12 pm over uproar by Opposition MPs over various issues.

11:39 am: I hope the women's hockey team advances to the final and win it, and make the country proud, says Samajwadi Party MP Jaya Bachchan.

11:25 am: Just In: Rajya Sabha adjourned till 12 noon over ruckus by Opposition MPs over various issues.

11:17 am: I congratulate PV Sindhu for wining the Bronze medal in Tokyo Olympics. With her spectacular performance, she has scripted history by becoming the first Indian woman to win two Olympics medals, says Rajya Sabha Chairman M Venkaiah Naidu.

11:15 am: I am delighted to tell you that PV Sindhu won the bronze medal for India in badminton women's singles at Olympic Games. This is her second consecutive Olympics medal. She is the first Indian woman to win two Olympic medals for individual events, says Lok Sabha Speaker Om Birla.

I congratulate her on behalf of this House, for this historic feat. I hope her achievement will be an inspiration for the youth of this country, he added.

11:00 am: They want Parliament to go on just like this, that their Bills get passed just like that and issues like inflation, COVID, fuel prices hike, Rafale get hidden, says Leader of Opposition in Rajya Sabha Mallikarjun Kharge.

10:35 am: Government is responsible if the House isn't functioning. Government doesn't want itself to get exposed. They'll face challenges if there's a discussion on 'Pegasus', they'll lose their dignity. They say they're ready for discussion but they don't want it, says Leader of Opposition in Rajya Sabha Mallikarjun Kharge.

9:53 am: Rajya Sabha Floor leaders of like-minded Opposition parties to meet today at 10.15 am at Leader of Opposition Mallikarjun Kharge's office to chalk out the strategy for the day's proceedings of the House, reports ANI.

9:27 am: Union Minister Sarbananda Sonowal will move the Inland Vessels Bill, 2021 in the Rajya Sabha today.

8:51 am: Congress MP Manickam Tagore gives adjournment motion notice in Lok Sabha to have a discussion in the House on 'Pegasus Project' media report, in the presence of the Prime Minister or Home Minister.

8:38 am: Union Finance Minister Nirmala Sitharaman will move the Tribunals Reforms Bill in the Lok Sabha on Monday. The Bill seeks to amend the Cinematograph Act, 1952, the Customs Act, 1962, the Airports Authority of India Act, 1994, the Trade Marks Act, 1999 and the Protection of Plant Varieties and Farmers' Rights Act, 2001.

8:25 am: According to a report by Dainik Jagran, the Centre is also mulling ending the monsoon session "prematurely" amid the row over the Pegasus report.

8:20 am: The Centre, however, is not keen on a debate over the Pegasus report and wants to have discussions over topics related to the common man.

8:15 am: Parliament will resume functioning today once again. However, it is expected that the ruckus over the Pegasus report will continue even today.