Parliament Budget Session LIVE Updates: PM Modi today said that four-five mini-Budgets were presented by the Centre in 2020 and expressed confidence that the Union Budget 2021 would also be seen as part of that series.

New Delhi | Jagran News Desk: The Budget Session of the Parliament began today with President Ram Nath Kovind addressing the joint session of the two Houses. During his address, President Kovind called the violence on Republic Day 'unfortunate' and said that the government will respect the Supreme Court's decision to put farm laws on hold. He also lauded government's COVID-19 response, saying 'timely decisions' saved lakhs of lives in India.

Ahead of President Kovind's address, PM Modi said that four-five mini-Budgets were presented by Finance Minister Nirmala Sitharaman in 2020 and expressed confidence that the Union Budget 2021 would also be seen as part of that series.

Here are the highlights from the first day of the Parliament Budget Session:

16:04 pm: The policy response which India came up with, was a mature and farsighted one. India undertook short term pain to get long term gain. The 'V-shaped recovery' makes India a sui generis case in mature policy making: Chief Economic Advisor KV Subramanian

15:54 pm: Strong correlation of lockdown with decline in cases and deaths is found across states, not just within a few states. Hence Economic Survey infers that lockdown had a causal effect on saving lives and livelihoods, says Chief Economic Advisor KV Subramanian

Also Read
'PM Modi missing along with oxygen, vaccines, all that remains is his..

14:36 pm: 17 out of 19 parties boycotted President's address today, don't they (Centre) feel ashamed of themselves? How do they sleep at night? We will not let Parliament run from Monday onwards until the farmers' issues are resolved and they win, says Congress' Ravneet Singh Bittu.

13:02 pm: Farm laws should be repealed. We protested against the President's Address and raised slogans in support of farmers. We were not allowed inside the Central Hall, so we raised slogans at its gate. Farmers are being called traitors. So, we boycotted the Address, says AAP MP Sanjay Singh.

13:01 pm: Boycotting President's Address doesn't mean insulting him. We're standing with farmers and demanding that farm laws be taken back. It's our biggest reason behind boycotting the Address. We'll debate when there is a Motion of Thanks and debate, says Congress' Adhir Ranjan Chowdhury.

11:56 am: The rehabilitation of Bru refugees is being carried out peacefully. The historic Bodo peace agreement was also signed and successfully implemented. Bodoland Territorial Council election took place successfully after the agreement, says President Kovind.

11:56 am: Extermism in the northeast is heading towards its end, the incidents of violence are declining. The youth that had gone astray is returning to the mainstream of development and nation-building, says President Kovind.

11:46 pm: Last governments had made efforts for construction of a new Parliament building. It's a delightful coincidence that the nation started construction while moving towards 75th year of independence. The building will provide more facilities to MPs in carrying out their duties, says President Kovind.

11:43 am: My government would like to clarify that the rights and facilities that were available before the formation of the three farm laws have not been cut short, in fact with these new agricultural reforms the government has provided new facilities and rights to farmers, says President Kovind.

11:34 am: Small and marginal farmers are also a priority for my government. To support such farmers in their small expenses, around Rs 1,13,000 crores have been transferred directly to their accounts, under PM-Kisan Samman Nidhi, says President Kovind.

11:25 am: The national flag and a holy day like Republic Day were insulted in the past few days. The Constitution that provides us Freedom of Expression, is the same Constitution that teaches us that law and rules have to be followed seriously, says President Kovind.

11:18 am: The facilities of Ayushman Bharat Yojana can be availed in any of the 24,000 hospitals across the nation. The poor are getting medicines at very low costs at 7000 centres across the country, under Pradhan Mantri Bhartiya Janaushadhi Pariyojana, says President Kovind.

11:14 am: It is a matter of pride that India is running the biggest vaccination program in the world. Both vaccines of this program are made in India. In this crisis, India shouldered its responsibility towards mankind and provided lakhs of doses of vaccines to several nations, says President Kovind.

11:12 am: I am satisfied that the timely decision taken by my Government saved the lives of lakhs of citizens. Today the number of new COVID cases is going down rapidly. The number of recoveries is very high, says President Kovind.

11:11 am: In this fight against the pandemic, we lost many citizens. Former President Pranab Mukherjee passed away in this Corona period. Six MPs left us untimely due to COVID. I pay my tribute to all of them, says President Kovind.

11:07 am: President Kovind addresses joint sitting, says "it's a new year and a new decade and we're also entering into the 75th year of independence. Today all MPs are present here with message and trust that however tough be the challenge neither we nor India will stop".

11:04 am: This is the Budget Session. For the first time in India's history, in a way, the Finance Minister had to present 4-5 mini budgets in 2020 in the form of different packages. So this Budget will be seen as a part of those 4-5 mini budgets, I believe this, says PM Modi. 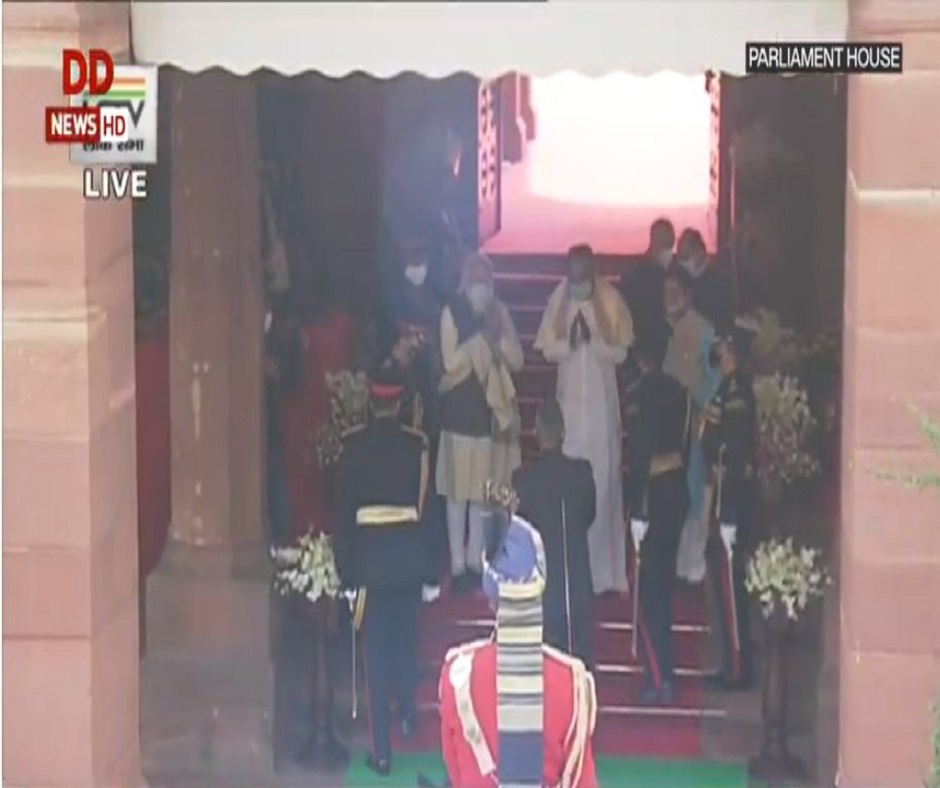 10:56 am: This is the Budget Session. For the first time in India's history, in a way, the Finance Minister had to present 4-5 mini budgets in 2020 in the form of different packages. So this Budget will be seen as a part of those 4-5 mini budgets, I believe this, says PM Modi.

10:46 am: This decade should be fully utilised. Keeping this in mind, there should be discussions in this session focussing on the decade - this is expected by the nation. I believe that we will not lag behind in making our contribution for the fulfilment of people's aspiration, says PM Modi.

10:43 am: Today commences the first Session of this decade. This decade is very important for the bright future of India. A golden opportunity has come before the nation to fulfill the dreams seen by the freedom fighters, says PM Modi. 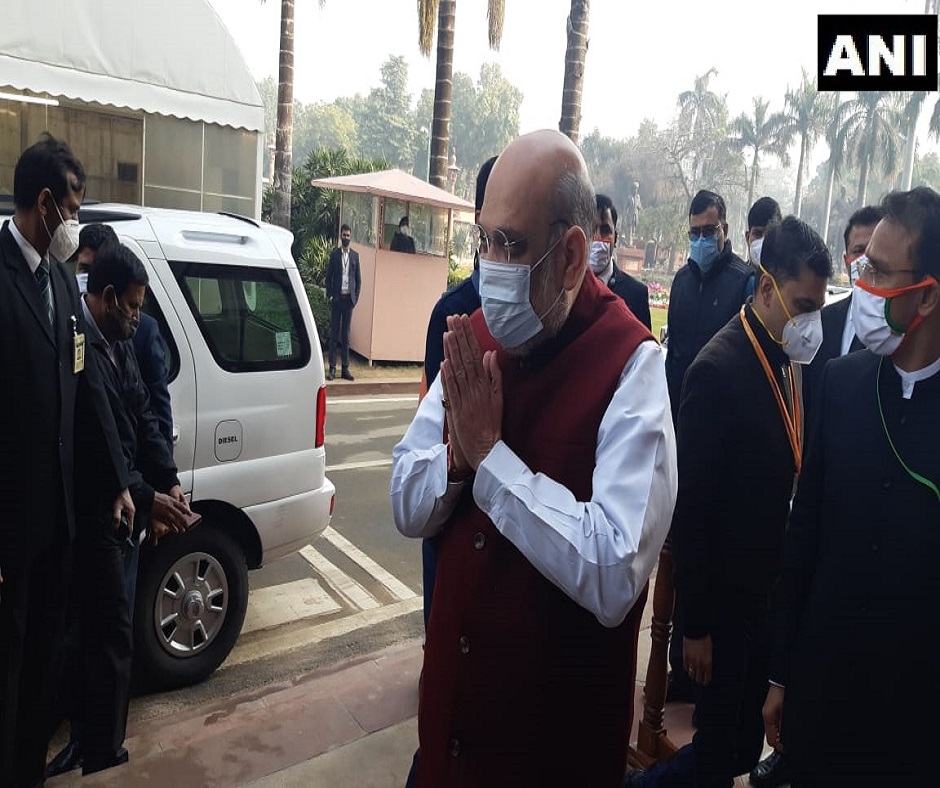 10:17 am: Lok Sabha Speaker Om Birla has called a meeting of floor leaders of the House today afternoon.

9:24 am: Security check begin done ahead of the beginning of Parliament Budget Session. 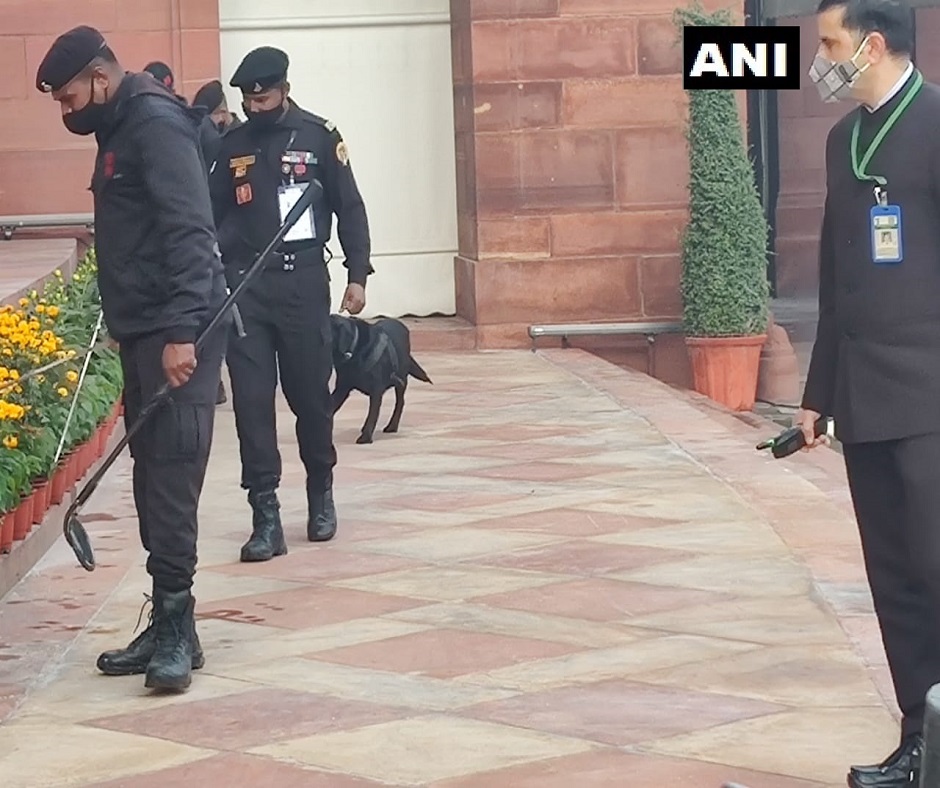 8:32 am: Recap: This session will be held as per COVID-19 protocols, with Rajya Sabha and Lok Sabha meeting in shifts of five hours each -- with the upper house meeting from 9 am to 2 pm and the lower house in the evening from 3 pm to 8 pm.

7:59 am: The opposition has said that they will boycott President's address in solidarity with farmers protesting against agricultural acts.

"The Prime Minister and the BJP government remain arrogant, adamant and undemocratic in their response. Shocked by this insensitivity of the government, the opposition political parties, reaffirming the collective demand for the repeal of the anti-farmer laws and in solidarity with the Indian farmers, have decided to boycott the President's address to both the houses of Parliament...," a joint statement issued by the opposition said.

7:25 am: Ahead of Budget presentation, the Centre will present the Economic Survey 2021 today.

7:18 am: The Budget Session of the Parliament will begin today. The government will present the Union Budget 2021 on February 1 amid challenges posed by coronavirus-induced lockdown.