Parliament Budget Session: PM Modi on Monday lauded India's response to coronavirus pandemic and said that the country has come up with more than one vaccine within a year to fight against the COVID-19.

New Delhi | Jagran Politics Desk: Prime Minister Narendra Modi on Monday replied to the Motion of Thanks on President Ram Nath Kovind's address in the Rajya Sabha and slammed the opposition for spreading lies about the farm laws. The Prime Minister also attacked the Congress over 1984 anti-Sikh riots and said that India's nationalism is inspired by the ideals of Netaji Subhas Chandra Bose and stated that the country is the 'mother of democracy'.

PM Modi also lauded India's response to coronavirus pandemic and said that the country has come up with more than one vaccine within a year to fight against the COVID-19 and is also providing it to the world which will further boost self-confidence. He further said that the COVID period has added new strength to the country's federal structure and the spirit of cooperative federalism.

18:03 pm: National heroes don't have to prove anyone whether they're in favour of the nation or against it. It's a democracy, we can express ourselves whenever we want. If someone is judging celebrities on basis of a tweet,then they're anti-India, says Maharashtra MP Navneet Rana.

17:13 pm: Our democracy is lively and healthy and everyone above party lines wants to keep it the same. It's our responsibility to keep dignity of every institution. I appeal to everyone to hold discussions on Presidential address and not let traditions break down, says Defence Minister Rajnath Singh in Lok Sabha 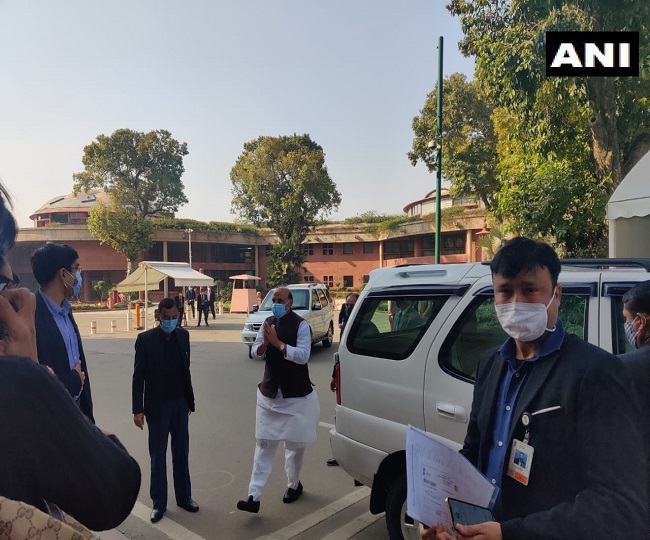 13:33 pm: Congress MP Hibi Eden gives adjournment motion notice in Lok Sabha and demands to give special packages to the tourism sectors, which had suffered loss due to COVID-19

13:32 pm: Congress MPs Manish Tewari, Jasbir Gill and CPM MP AM Arif give adjournment Motion Notice in Lok Sabha and demand the repealing of three Farm laws in the wake of farmers’ agitation.

12:42 pm: Most areas in Jammu and Kashmir are forests and mountains. When it was made UT, many MPs said they'll buy land there. I said I've not been able to do so and asked them if they know cost of land in Jammu and Srinagar. Price of land in these cities is Rs 40-50 crore per acre, says Congress' Ghulam Nabi Azad in Rajya Sabha

Existence of land is almost negligent in Jammu and Kashmir, that's why Maharaja Hari Singh added that provision for land, he added.

11:50 am: A new entity has come up in the country- 'Andolan Jivi'. They can be spotted wherever there is a protest, be it agitation by lawyers, students, or labourers, explicitly or implicitly. They cannot live without 'andolan', we have to identify them and protect nation from them, says PM Modi

11:44 am: This country is proud of every Sikh. What have they not done for this country? Whatever respect we give them will always be less. I've been fortunate to spend crucial years of my life in Punjab. Language used by some for them and attempt to mislead them will never benefit nation, says PM Modi

11:44 am: The nation is making progress and we are talking about FDI but I see that a new FDI has come to the fore. We have to protect the nation from this new FDI. We need Foreign Direct Investment but the new FDI is 'Foreign Destructive Ideology', we have to protect ourselves from it, says PM Modi.

11:37 am: Manmohan ji is here, I'd read out his quote. Those taking a U-Turn (farm laws) will perhaps agree with him. There are other rigidities because of marketing regime set up in 1930s which prevent our farmers from selling their produce where they get highest rate of return. We intend to remove all those handicaps which come in the way of India realising its vast potential at one large common market, says PM Modi.

11:24 am: We've forgotten the ideals of Netaji. We've started cursing ourselves. I sometimes get surprised, world gives us a term and we start following it - 'Largest democracy of the world' - it feels good to hear this but we didn't teach our youth that India is the mother of democracy, says PM Modi.

11:23 am: Our democracy is not a western institution. It's a human institution. India's history is filled with examples of democratic institutions. We find mention of 81 democracies in ancient India. Today it's essential to warn citizens about the attacks on India's nationalism, says PM Modi.

11:14 am: I would like to appreciate the contribution of Shri HD Devegowda ji on the discussions relating to agriculture in the house. His words have added great perspective to the debate. He himself has a strong association with the agriculture sector, says PM Modi

11:03 am: I was listening to Derek ji, he had chosen good words - Freedom of Speech, Intimidation. When I was listening to him, I was wondering if he is talking about Bengal or the country. He sees all this for 24 hours, so he might have said the same here too, says PM Modi

Bajwa sahab from Congress was also speaking. He was speaking in such detail that I thought he will reach Emergency (period) shortly and speak on it, he is just one step away from it. But he didn't go there. Congress disappoints this country a lot, you did that too, he added.

11:02 am: India has seen days when there was a large threat of polio, smallpox. Nobody knew whether India will get a vaccine or how many people will get it. From those days, we're now here, when our nation is making vaccines for the world. This increases our self-confidence, says PM Modi

10:54 am: The COVID-19 period has added new strength to our federal structure and the spirit of cooperative federalism, says PM Modi.

10:51 am: India has seen days when there was a large threat of polio, smallpox. Nobody knew whether India will get a vaccine or how many people will get it. From those days, we're now here, when our nation is making vaccines for world. This increases our self-confidence, says PM Modi.

10:50 am: You might've seen on social media-an old woman sitting outside her hut on footpath, with a lit earthen lamp, praying for welfare of India. We're mocking her! If somebody who never went to school thinks they can serve India by lighting lamps, they can do it. It's being mocked!, says PM Modi

10:42 am: India fought against all odds to beat COVID-19 pandemic, says PM Modi

10:40 am: India is truly a land of opportunities. Several opportunities are awaiting us, so a nation which is young, full of enthusiasm and a nation that is making efforts to realise the dreams, with a resolve, will never let these opportunities simply pass by, says PM Modi

10:35 am: In Rajya Sabha, over 50 MPs expressed their views for over 13 hours, they expressed their invaluable views. So, I express my gratitude to all the MPs, says PM Modi

10:31 am: PM Modi replies to the Motion of Thanks on President Ram Nath Kovind's address in the Rajya Sabha

10:13 am: Congress MP Manickam Tagore has given adjournment motion notice in Lok Sabha to discuss the flash floods in Uttarakhand.

10:10 am: We're emphasising on indigenisation and have chosen 101 items that won't be imported from other nations but manufactured in India by Indians, says Defence Minister Rajnath Singh in Rajya Sabha.

9:22 am: Just In: The Prime Minister's Office (PMO) has said that PM Modi will reply to the Motion of Thanks on the President's address at 10.30 am today.

8:42 am: Shiv Sena MP Priyanka Chaturvedi has given suspension of business notice under rule 267 in Rajya Sabha to discuss the investigation of TRP scam.

8:41 am: BJP MP Nabam Rebia has given Zero Hour notice in Rajya Sabha and demanded for creation of a separate all India service cadre for Arunachal Pradesh.

8:40 am: BJD MP Prashanta Nanda has given Zero Hour Notice in Rajya Sabha and demanded to provide mobile connectivity in villages and left-wing extremism (LWE) areas in Odisha.

8:35 am: CPI MP Binoy Viswam has given suspension of business notice under rule 267 in Rajya Sabha over the flash floods in Uttrakhand's Chamoli.

8:20 am: Also Read -- 'Nothing wrong in farm laws but in protest': Narendra Singh Tomar tears into Oppn for misleading farmers

8:15 am: The government, however, has accused opposition of misleading farmers over farm laws, saying it is ready for amendments but "that doesn't mean there is any problem" in the legislation.

7:50 am: The Prime Minister's reply comes amidst opposition's continuous call to withdraw the farm laws and fulfil farmers' demands.

7:45 am: Prime Minister Narendra Modi will likely to reply today on the motion of thanks on the President Ram Nath Kovind's address in the Rajya Sabha.