Parliament Highlights: Tomar on Friday asserted that the MSP will continue, adding that the Modi government committed to welfare of farmers and the new farm laws aimed at boosting their income.

New Delhi | Jagran News Desk: Union Agricultural Minister Narendra Singh Tomar on Friday slammed the opposition for misleading farmers over agricultural laws and said that the central government is ready for amendments but "that doesn't mean there is any problem" in the laws. Tomar further asserted that the MSP will continue, adding that the Modi government committed to welfare of farmers and the new farm laws aimed at boosting their income.

This comes a day after 10 MPs wrote a letter to Lok Sabha Speaker Om Birla over farmers' protest on Delhi borders, the opposition has once again prepared to corner the Centre over the three contentious farm laws that were passed in the Parliament last year. The opposition, lead by the Congress, on Thursday disrupted Parliament proceedings regularly and raised slogans against the Centre and the farm laws, forcing the Speaker to adjourn the Lok Sabha several times.

Here are the LIVE Updates from Parliament Budget Session:

18:20 pm: Govt promulgated ordinances that were subsequently enacted into farm laws in 2020. Draft of ordinance was circulated to various Ministries/Depts for comments. States were consulted via video conferencing on May 21, 2020 attended by officials of 13 States/UTs:Union Agri Min in R

18:10 pm: Lok Sabha adjourned till Monday as the Opposition MPs continued their protest in the House against the #FarmLaws and raised slogans that the three laws be repealed.

18:00 pm: So, I have told all the leaders of the parties as well as farmers that the Govt is ready for an open discussion. We have been talking to them. We have given them a proposal, we will talk with them again after their proposal comes: Agriculture Minister Narendra Singh Tomar

17:45 pm: As far as #FarmLaws are concerned, I was in Rajya Sabha today & I noticed that no one is ready to say what is black in the 'black laws'. If you are protesting against the law, then discussion should be held on its provisions. Unfortunately, this is not happening: Agri Minister

17:30 pm: West Bengal Budget Session is being held without the Governor's Speech. How is it being done? It's not allowed in our democracy to remain in power from back door: Dilip Ghosh, BJP MP and West Bengal party President, in Delhi

17:15 pm: We do want a discussion but govt should say that there will be a stand-alone discussion on agriculture: Adhir Ranjan Chowdhury, leader of Congress in Lok Sabha

16:17 pm: Just In: Lok Sabha adjourned till 6 pm today amid uproar by the Opposition over farm laws.

14:30 pm: Marathas, Jats, Rajputs and Thakurs want reservation in Maharashtra, Haryana, Rajasthan and UP respectively. There is a large population of Kshatriya community. Just as 10 per cent reservation was given to economically weaker section, they should also be given reservation, says Union Minister Athawale

13:07 pm: Also Read -- 'Nothing wrong in farm laws but in protest': Narendra Singh Tomar tears into Oppn for misleading farmers

12:40 pm: I made it clear that if the government is ready to make amendments, it doesn't mean there is any problem in farm laws. People in a particular state are misinformed, says Union Agriculture Minister Narendra Singh Tomar.

12:29 pm: We have started to provide MSP, 50 per cent more than the production cost. Also, Rs 1 lakh crore agriculture infrastructure fund has been given under Atmanirbhar package. We have tried to ensure the requisite investment reaches the agriculture sector, says Union Agriculture Minister Narendra Singh Tomar.

12:25 pm: TMC MP Saugata Ray has given adjournment motion notice in Lok Sabha over alleged 'repression of farmers by Police with the use of bar wires, spikes, trenches.'

12:20 pm: The pro-poor schemes of the government have brought a change in the lives of the people living in villages, says Union Agriculture Minister Narendra Singh Tomar

12:20 pm: 15th Finance Commission has recommended for providing Rs 2.36 lakh crores to gram panchayats, which has been accepted by the Cabinet. Around Rs 43,000-cr have been sanctioned for healthcare in rural areas. Rs 2.8 lakh crores will be spent via gram panchayats in 5 years, says Narendra Singh Tomar.

12:11 pm: BJP MP Rakesh Sinha hits back at opposition over farmers' protest. "The Opposition says democracy is being stifled under the Modi regime. I would like to show the mirror to the Opposition. We don’t even need to go to the Emergency days. Look at the laws you brought in the UPA regime," he said.

11:58 am: Congress' Mallikarjun Kharge today in Rajya Sabha said that more thanb 6 crore farmers have not received a single penny out of 24.65 crore total farmers in the country according to government records.

11:57 am: Union Agriculture Minister Narendra Singh Tomar has arrived at the Parliament. He is expected to answer opposition's queries on farm laws.

11:15 am: Congress MP Anand Sharma in Rajya Sabha attacked Centre over farmers' protest and paid tributes to the 194 farmers who died during the stir.

"We express sympathies for police personnel and officers who were injured during the January 26 violence. No one has the right to attack those who are discharging their duties. The Red Fort incident has sent shockwaves across the nation and it should be investigated," he said.

10:30 am: Congress MP and Whip in Lok Sabha Manickam Tagore has given adjournment motion notice over "bodies of four fishermen from Tamil Nadu found in Palk Strait".

10:03 am: BSP MP Satish Mishra today in Rajya Sabha said that the government wants to suppress the farmers' protest by snapping their water and electricity supplies which "is a human rights violation".

"Nails have been fixed near the protest sites. I think government would not have made this kind of preparation at Pakistan border as it is doing at Delhi borders. Annadatas are being called the enemy of the nation. I urge you to shun ego and repeal the three laws," he said.

9:34 am: Just In: BJP has issued a three-line whip to its Rajya Sabha MPs to be present in the House from Feb 8 to Feb 12 to support government's stand.

8:56 am: Recap: Prime Minister Narendra Modi will to reply to the Motion of Thanks on the President's Address in the Rajya Sabha on Monday.

8:27 am: BJP MP Mahesh Poddar has given short duration discussion notice in Rajya Sabha over 'efficient handling of COVID-19 situation in the country'.

8:13 am: The opposition has also prepared to corner the government over India-China standoff in eastern Ladakh. Amid this, the government on Thursday said that it has "given an appropriate response to China for attempts of transgression in several areas of the Western Sector at the LAC". 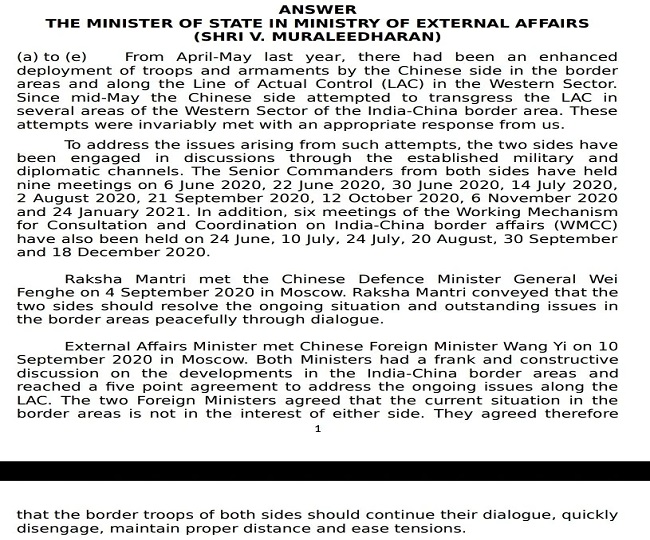 8:11 am: Amid uproar in the House, Congress MP Shashi Tharoor also asked the Centre to leave its "stubborn" approach and discuss about the ongoing farmers' protest in the Parliament.

"What does GoI think Parliament is for? It is a deliberative body of elected representatives meant to offer their collective views on issues of national importance. Last session, GoI refused to discuss China &now farmers. Why have a Parlmnt at all if you don't want it to function?" he tweeted.

8:07 am: On Thursday, 10 opposition MPs had written a letter to Lok Sabha Speaker Om Birla and demanded a discussion over the farmers' protest in Delhi in the House.

"The impression we got at the Delhi Ghazipur border is like the border between India and Pakistan. The condition of farmers resembles that of prisoners in jail," the MPs wrote in their letter. 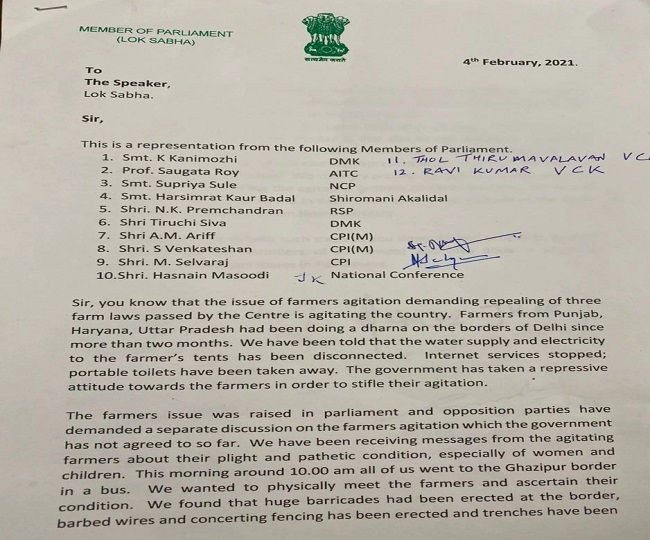 8:00 am: The opposition has once again prepared to corner the government over farmers' protest and the Republic Day violence in the national capital.