Karnataka Crisis: BJP and Congress to move their MLAs to Bengaluru resorts

New Delhi/Bengaluru | Jagran News Desk: The political turmoil in Karnataka continues to aggravate with every passing day and finally knocking the doors of the Supreme Court on Thursday. Despite the apex court urging Speaker Ramesh Kumar to take a decision “forthwith” on the resignations of 10 rebel MLAs, the latter reserved his decision, insisting he will take a final call only after hearing all sides.

Kumar, who met 13 rebel Congress MLAs this evening after the Supreme Court asked him to do so in the morning, made it clear that he was not rushing into accepting the resignations as he wanted to be "satisfied" which would require a detailed scrutiny.

The Supreme Court will now resume the hearing on the plea against Kumar by the 10 MLAs and also will hear the Speaker who had sought more time to look into the resignations.

Meanwhile, the Monsoon Session of the Karnataka Assembly also begins today. The BJP has decided to raise the issue of the resignations after the obituary references, saying the Kumaraswamy government has lost its majority.

Here are all the highlights of the day's development on the ongoing political crisis in Karnataka:

03:59 pm: BJP to move its MLAs to Ramada Hotel in Bengaluru.

03:03 pm: Congress to move its MLAs to Clarks Exotica Convention Resorts in Bengaluru, after the Assembly proceedings today.

02:06 pm: Ready for everything, I am not here to cling to power: CM HD Kumaraswamy

02:05 pm: After all these developments, I am seeking your permission and time to prove the majority in this session: Karnataka CM HD Kumaraswamy in Vidhana Soudha

01:17 pm: Karnataka CM HD Kumaraswamy in Vidhana Soudha in Bengaluru: After all these developments, I am seeking your permission & time to prove the majority in this session.

01:10 pm: Hearing in the matter of rebel Karnataka MLAs: The Supreme Court said, we will consider the issue on Tuesday.

01:01 pm: Hearing in the matter of rebel Karnataka MLAs: Supreme Court orders to maintain status quo, when the matter would be heard again on Tuesday.

01:01 pm: Expressing confidence that the government would survive, the cabinet that met under the leadership of Kumaraswamy said it was ready to face a no-confidence motion if moved by the opposition BJP.

12:47 pm: Hearing in the matter of Karnataka rebel MLAs: Dr Rajeev Dhavan, arguing for Karnataka CM: Speaker has said that he will decide on the resignations at the earliest. I know of only one case - Haryana Assembly case - wherein HC gave Speaker four months to decide, Rajeev Dhavan submits.

12:33 pm: Hearing in the matter of Karnataka rebel MLAs: On what basis is Supreme Court being asked to interfere? That this government is in minority, there is maladministration. So they says please assist us since this govt has failed Not a word about Speaker's actions: Rajeev Dhavan

12:32 pm: Hearing in the matter of Karnataka rebel MLAs: Dr Rajeev Dhavan, arguing for Karnataka CM, objects to the submissions of the rebel MLAs that the speaker has acted in a mala-fide manner.

12:28 pm: Hearing in the matter of Karnataka rebel MLAs: It takes 10 seconds to read 10 lines but speaker says he will study it the whole night. Resignation letters are one-line resignations, says Mukul Rohatgi, representing rebel MLAs. Rohatgi has also has also suggested issuing a contempt notice against speaker.

12:21 pm: Hearing in the matter of Karnataka rebel MLAs: Congress leader and senior advocate Abhishek Manu Singhvi argues that these MLAs' intention in giving resignation is something different, and it is to avoid disqualification.

Congress leader and senior advocate Abhishek Manu Singhvi argues that these MLAs' intention in giving resignation is something different, and it is to avoid disqualification. 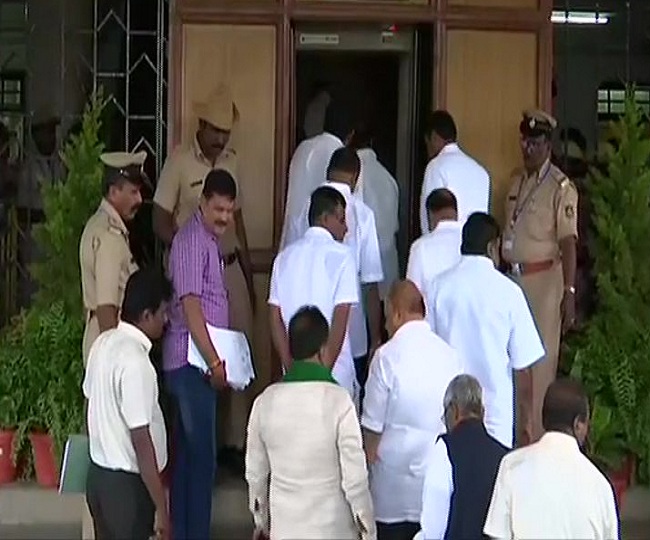 11:49 am: Hours after ruling out resigning as Karnataka CM, HD Kumaraswamy on Thursday night tweeted: "Congress-JDS coalition in the state is going strong despite the efforts to destabilise. We are confident and prepared for a smooth and fruitful conduct of legislative sessions."

11:40 am: BS Yeddyurappa, BJP, on Karnataka Assembly session beginning today: We will give a whip to attend the session from today to the end of this month.

11:39 am: A Karnataka Youth Congress leader has moved the Supreme Court seeking to intervene in a case filed by 10 rebel Congress and JD(S) MLAs for a direction to the assembly speaker to accept their resignations.

11:36 am: Lawyer appearing for many Congress workers today, before the Supreme Court mentioned and sought a hearing in Karnataka political crisis case. CJI, Ranjan Gogoi, heading the three judge-bench, asked him to remain present when the same matter would be taken up for hearing today.

10:36 am: In what may come as a little relief for the tattering Congress-JD(S) government in Karnataka, rebel Congress lawmaker Roshan Baig who had resigned three days ago, arrives at Vidhana Soudha to attend the Monsoon session, indicating that he has been pacified by the coalition government.

10:25 am: According to reports, Speaker KR Ramesh Kumar likely to accept the resignation letters of five MLAs, who have submitted their papers in a prescribed format.

10:05 am: Karnataka speaker KR Ramesh Kumar has given appointment for 4 pm to three of the five MLAs whose resignations were in the prescribed format.

10:04 am: The opposition BJP is likely to move an adjournment motion seeking discussion on the political crisis. The speaker may not allow discussion on that and may take up obituary references before adjourning the House for the day.