Chandigarh Nagar Nigam Election Results 2021: The BJP, which had won 20 seats in the previous elections, managed to win just 10 seats while the Congress, which is in power in Punjab, got eight wards.

Chandigarh | Jagran Political Desk: In a setback for the Bharatiya Janata Party (BJP) and the Congress ahead of the crucial Punjab assembly polls 2022, Arvind Kejriwal-led Aam Aadmi Party (AAP) emerged as the leading party in the Chandigarh Municipal Corporation elections 2021, winning 14 of 35 wards. The BJP, which had won 20 seats in the previous elections, managed to win just 10 seats while the Congress, which is in power in Punjab, got eight wards.

Meanwhile, the Shiromani Akali Dal, a former ally of the BJP, won just one seat. The polling for the Chandigarh Municipal Corporation elections was held on Friday and more than 60 per cent people of the 6.33 lakh eligible voters had cast their votes for the 35-ward Municipal Corporation in the union territory (UT).

Here are the highlights from Chandigarh Nagar Nigam Election Results 2021:

- Here's a look at the election results: 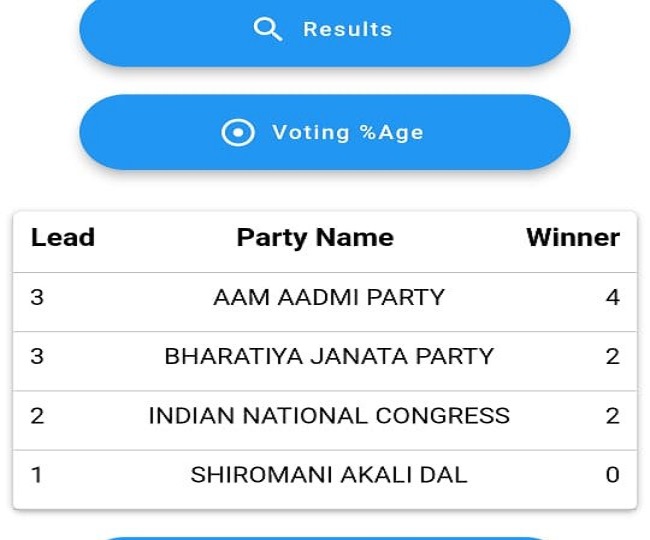 - Akali Dal, on the other hand, has won just one seat.

Also Read
'I am rejecting it': Ex-West Bengal CM Buddhadeb Bhattacharjee refuses to..

- The Congress' tally has also increased to eight after it won three more seats.

- The BJP has won two more seats, taking its tally to 12.

- Till now, AAP has won 14 seats, BJP gets 10 and Congress has emerged victorious on five wards.

- The Shiromani Akali Dal, a former BJP ally, has won just one seat so far.

- AAP is contesting elections there for the first time and according to the current trends, the people of Chandigarh have given us a grand welcome. I want to thank every voter and party worker for this, says Delhi Deputy Chief Minister Manish Sisodia.

- Till now, the AAP has won eight seats while the BJP and Congress have bagged five and two wards respectively.

- BJP's Mahesh Inder Singh Sidhu is hopeful of winning from ward no 2. "I am very hopeful but nothing is complete without god’s blessings and that is why I am here," he said, as reported by The Indian Express.

- People want Kejriwal's Delhi model in Chandigarh and they are fed up from corrupt BJP government, says AAP leader Damanpreet Singh, as reported by The Times of India.

- As per State Election Commission, the AAP is leading on 3 seats, the BJP on 3, Congress on 2 and Shiromani Akali Dal on 1.

- The BJP, which had won 20 seats in the previous elections, has managed to bag just two seats till now.

- Meanwhile, the Congress has won couple of seats.

- So far, the AAP has won four seats.

- It is expected that the results will be declared by Monday afternoon.

- The counting of votes began at 9 am on Monday.