Prior to this, the party had, in a statement, said that "it respects all religions" and also strongly denounced the insult of any religious personality.

New Delhi | Jagran News Desk: Amid the massive controversy over their derogatory comments and tweets on Prophet Mohammad, the BJP on Sunday suspended its spokesperson Nupur Sharma from the party's primary membership. The BJP has also expelled its Delhi media head Naveen Kumar Jindal saying that his comments on social media vitiate communal harmony in the country. BJP leader Naveen Kumar Jindal has been terminated from the party's primary membership, "for expressing thoughts communal disharmony on social media."

The development came hours after the party, in a statement, said that "it respects all religions" and also strongly denounced the insult of any religious personality.  In the notice issued to Nupur Sharma by the BJP's Central Disciplinary Committee, it is stated that she violated rule number 10 (A) of the BJP's constitution.

“You have expressed views contrary to the Party’s position on various matters which is in clear violation of rule 10 ( A) of constitution of BJP. I have been directed to convey to you that pending further inquiry you are suspended from the party/ your responsibilities, assignments if any with further effect," stated the notice issued reads. 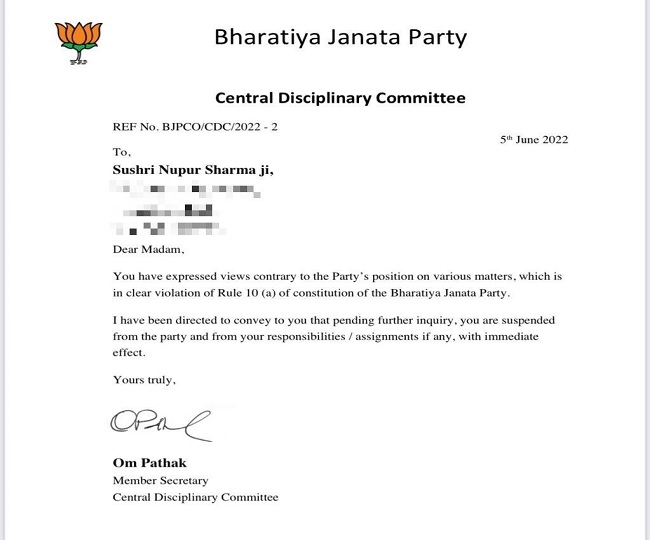 Earlier in the day, BJP said in a statement issued by its general secretary Arun Singh, "The BJP strongly denounces insult of any religious personalities of any religion. The Bharatiya Janata Party is also against any ideology which insults or demeans any section or religion. The BJP does not promote such people or philosophy."

BJP stated that it "respects all religions" and is "strongly against any ideology which insults or demeans any sect or religion". "During the thousands of years of the history of India every religion has blossomed and flourished. The Bharatiya Janata Party respects all religions," the brief statement said.

"India's Constitution gives the right to every citizen to practice any religion of his/her choice and to honour and respect every religion. As India celebrates 75th year of its independence, we are committed to making India a great country where all are equal and everyone lives with dignity, where all are committed to India's unity and integrity, where all enjoy the fruits of growth and development," it said.

Soon after BJP issued the notice to suspend Nupur Sharma and Expel Naveen Jindal, both the leaders in their separate posts said sorry.

'I take back my words if they hurt anyone's religious sentiments':BJP leader Nupur Sharma

BJP leader Nupur Sharma issues an apology; tweets, "I take back my words if they hurt anyone's religious sentiments." pic.twitter.com/yIFc4oKYs5

Naveen Kumar Jindal, post his expulsion from BJP, tweets "... my question does not mean that I am against any religion." pic.twitter.com/xM4nJ5uh28

The Mumbai police registered an FIR against Sharma based on a complaint by Irfan Shaikh, joint secretary of the Mumbai wing of Raza Academy. It stated that Sharma, in a news debate on the Gyanvapi issue, allegedly made controversial comments about Prophet Mohammad. Moreover, Jindal allegedly tweeted against the interests of the country.