Uttar Pradesh Assembly Elections | What is the strategy BJP used to defeat SP amid COVID blues?

Amitabh Tiwari | Jagran Politics Desk: The result of Uttar Pradesh has been declared and BJP has returned to power with a thumping majority. Yogi Adityanath becomes the first Chief Minister in 37 years to retain power after completing a full five-year term in Uttar Pradesh. BJP has become the only party after 1977 to breach the 40 per cent vote share mark in the Uttar Pradesh assembly elections. The Election Commission data showed BJP bagging a 41.3 per cent vote share. In 1977, the Janata party had touched a 47.8 per cent vote share high in UP.

Party faced a lot of flak in Uttar Pradesh due to COVID mismanagement. There were horrific sights of floating dead bodies in the holy Ganga. There was utter chaos throughout the state which needed proper control and action. At that time, Yogi formulated a COVID Strategy (Communication, Visibility, and Delivery) to get over this mismanagement or this would have impacted the poll prospects.

Development: The Jewar International Airport, Kashi Vishwanath Corridor, fertilizer factory in Gorakhpur and the ambitious Defence Corridor were touted as significant developments to appeal to the aspirational voter.

Visibility: During COVID there was a lockdown, and many top leaders including Akhilesh Yadav and Mayawati were not really visible on the ground. It was Yogi, BJP leaders and cadre who came out and helped people. While the opposition was critical of mismanagement they were themselves missing from the ground. This was noticed by the people of the state.

Delivery: Realizing that any government cannot win without performing. Yogi laid focus on the delivery of Central schemes and state government schemes. The free ration delivery along with the cash transfer scheme of the BJP government has given the party a big boost in this election. With the help of these two schemes, the BJP was able to mobilise poor voters cutting across the caste and community line.

These schemes together with strategy have been able to subdue the anti-incumbency factor against the Yogi Adityanath government. Yogi Adityanath also initiated work on various policies that could help the most marginalized communities, in certain zones of Uttar Pradesh, to provide them access to education and cleanliness and to support their dreams of social mobility.

The BJP also deployed a phase-wise strategy to counter SP. In Phase 1 and 2, it focussed on counter consolidation against the SP-RLD alliance and convincing the section of angry Jats to stay with BJP. In Phase 3, it focussed on laabharthis and Phase 4 also brought in an element of nationalism as urban centres as Lucknow polled. In Phase 5, Hindutva was the focus (Ayodhya) while in 6 and 7 it played up how BJP is the true champion of OBCs, also highlighting the return of lawlessness which led to higher turnout by women.

- Resulting in BJP winning across Phases against SP

This resulted in BJP sweeping Phase 1 (Jat land) against expectations, it also gained a lead in Phase 2 (Minority land) and Phase 3 (Yadavland). BJP’s best performance was in Phase 4 where Lucknow, Kheri, Unnao and Pilibhit voted. In Phase 5 and 6 also it was largely able to negate SP’s caste-based alliances. However, SP put up a spirited performance in Phase 7 as expected with almost a tie. This Phase was even weak in 2017 for BJP. Here while Rajbhar’s alliance seems to have worked for the SP. 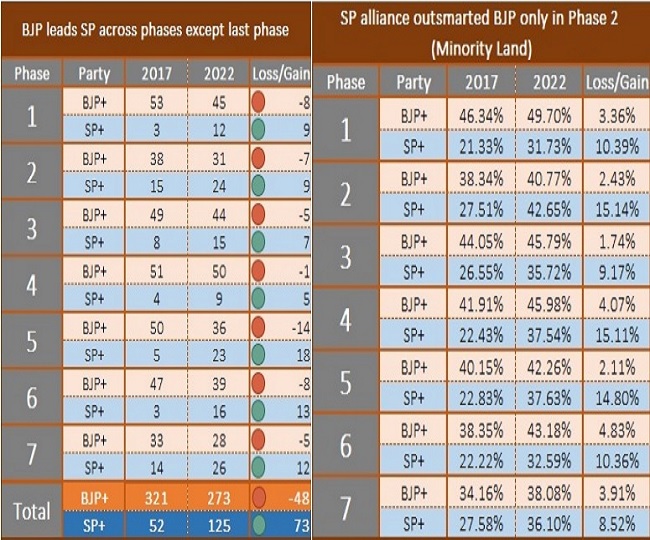 SP gained a 10 per cent vote share entirely at expense of BSP. It has not been able to add any significant vote block beyond MY which hinders its expansion beyond the 32% mark. On the other hand, BJP by attracting more Dalits (Jatavs as well as Non-Jatavs) has expanded its vote share further by around 2 per cent. Akhilesh needs to devise an entirely different strategy in 2027 as it is very difficult to beat a government that performs and has a solid caste base couple with laabharthi vote base. Can UP become another Gujarat for BJP? Only time will tell.