Can Vice Captains bail out Team Yogi and Team Akhilesh in Phase 7?

BJP is trying to counter Akhilesh by projecting Modi’s OBC credentials and how the party has given highest representation to the community in Modi as well as Yogi Cabinet.

Lucknow | Amitabh Tiwari: The last phase of the Uttar Pradesh elections goes to the polls on the 7th of March. 54 seats spanning across 9 districts of Azamgarh, Mau, Ghazipur, Jaunpur, Chandauli, Varanasi, Bhadohi, Mirzapur and Sonbhadra will seal the fate of the main contenders on Monday.

In a tightly contested election, both BJP and SP, have claimed victory, while Behenji’s BSP is also roaring while being late to the party.

Prime Minister Narendra Modi’s constituency Varanasi also votes in Phase 7 and he is staying here for 3 days to oversee the party’s poll preparations. Akhilesh Yadav has held a rally along with Mamata Banerjee while Priyanka and Rahul Gandhi are expected to pray at the Kashi Vishwanath temple.

Why are all bigwigs camping here? It has been a close election and no party wants to leave anything to chance. For BJP this was a weak phase in 2017 when it won just 33 of the 54 seats on offer. Its strike rate was lowest at 61% in this phase, even lower than the Muslim community dominated Phase 2.

Both SP and BSP have been traditionally strong in this Phase. SP had won 34 seats in 2012 while a higher than average SC population makes it a natural catchment area for BSP.

On an average, these 54 seats have 12% Muslim and 24% SC population. Brahmin and Thakur population is around 20%. Kurmis, Patels, Nishads, Rajbhars, Bania, are more than 20% of the population. Yadavs are also in good numbers.

The smaller caste-based alliance partners of BJP and SP are likely to play a key role in this Phase. Two factions of Apna Dal which enjoys good support among the Kurmi community are contesting. Mother has allied with SP while daughter Anupriya Patel with BJP.

On 30% of the seats, the allies have a direct role to play. On the balance 70% seats in Phase 7, their ability to transfer votes to their team SP / BJP will determine the success of the alliances.

The fight for the Non Yadav OBC (NYOBC) vote is intense here. BJP received 57% Kurmi and 61% NYOBC support in 2017 elections.

SP hopes to make serious dent in this vote bank through alliances, promise of OBC census, allegations that BJP is going to end reservations.

Its strategy is to gain 20% NYOBC vote from BJP, which is around 30% population. This will translate into a loss of 6% vote share for the saffron party and a similar gain for SP. A total of 12% swing can significantly boost its prospects in Purvanchal. 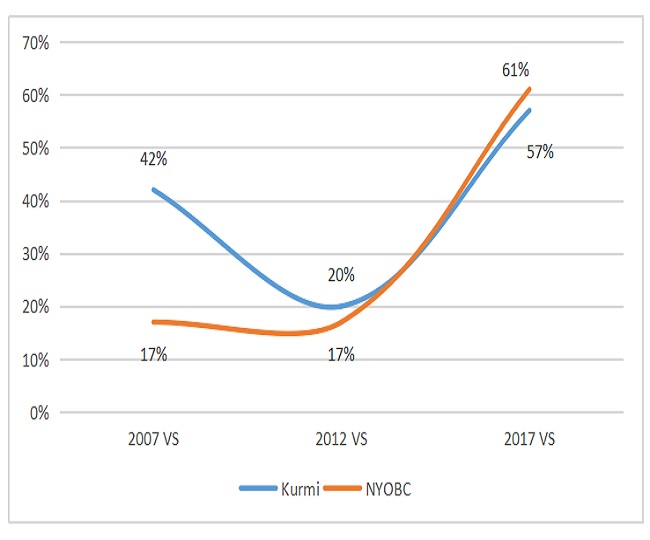 How they perform is very crucial in these elections? They are the kingmakers in this Phase. Are they the unchallenged leaders of their community or their claims are tall?

BJP is trying to counter Akhilesh by projecting Modi’s OBC credentials and how the party has given the highest representation to the community in Modi as well as Yogi Cabinet.

Can the Modi factor propel BJP to victory in Phase 7? Or will Akhilesh have the last laugh? Only time will tell…