Jagran Trending: 5 best places in India to catch a glimpse of migratory birds

New Delhi | Ashita Singh: Nature - which is home to millions of species - is the most beautiful gift that the mankind has received. Once such species is migratory birds, which migrate from one place to another in search for a better place to survive. These birds travel thousands of kilometres to search for perfect habitation for them and thus World Migratory Birds Day (WMBD) each year in May to create awareness and highlight the need for conservation for them.

Today, at English Jagran, we have complied a list of the best places in India where you can see migratory birds from different parts of the world:

Formerly known as the Bharatpur Bird Sanctuary, the Keoladeo National Park is recognised as one of the world's most important bird breeding and feeding grounds. In 1982, Keoladeo was declared a national park and later listed as a World Heritage Site by UNESCO in 1985.

The park is home to over 370 species of birds and animals such as the basking python, painted storks, deer, nilgai, Palaearctic Migratory Waterfowl and more. It also has a large congregation of non-migratory resident breeding birds such as Magpie Robins, Lapwings, Herons, Spoonbills, Water Hens, Egrets and the most famous Sarus Cranes. It was also known as the breeding ground for the rare and elusive to spot Siberian crane.

Chilika is an integral part of the culture of coastal Odisha. It is the largest wintering ground for migratory waterfowl found anywhere on the Indian sub-continent. It is one of the hotspots of biodiversity in the country and some rare, vulnerable and endangered species. Flocks of migratory waterfowl arrive from as far as the Caspian Sea, Lake Baikal, Aral Sea, remote parts of Russia, Kirghiz steppes of Mongolia, Central and South-East Asia, Ladakh and the Himalayas, to feed and breed in its fertile waters. In 1989-90 an estimated two million birds visited the Lake.

Known for its rich wildlife, biodiversity and grassland ecosystem, the Rann of Kutch is situated in the southern extension of the Great Rann in Gujarat and is known to host many migratory birds during winters. Little Rann's Banni grasslands host a rich diversity of avifauna and important grounds for migratory cranes, flamingos and other species of migratory birds. Some of these migratory birds found here include Common Crane, Demoiselle Cranes, European Roller, Lesser Florican, Greater Hoopoe Lark, Collared Pratincole, Red-necked Phalarope, Cream-colored Courser and Dalmatian Pelican. 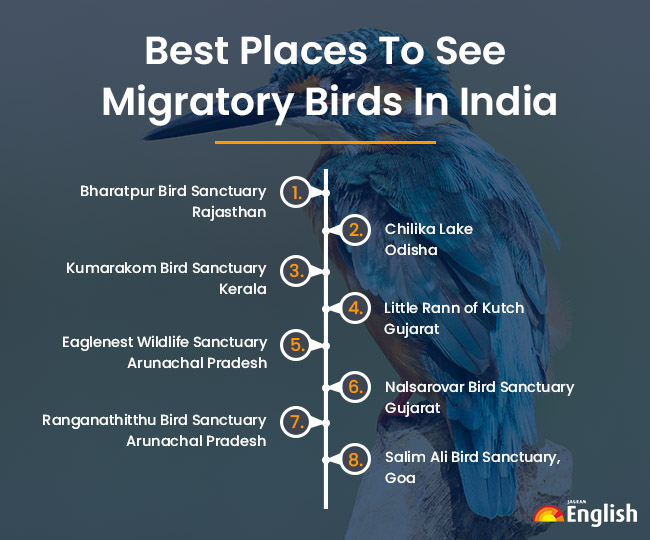 Nalsarovar is a 121-sq-km sanctuary, 60km southwest of Ahmedabad, that protects the Nalsarovar lake. This is the largest wetland sanctuary in the state. The sanctuary has flocks of indigenous and migratory birds, with as many as 250 species passing through in the winters. Ducks, geese, eagles, spoonbills, cranes, pelicans and flamingos are best seen at daybreak and dusk. Wild asses and blackbucks are also commonly seen in the lush region.

Salim Ali bird sanctuary is one of the smallest protected areas of Goa. The sanctuary is home to a number of common and uncommon species of marsh dwelling birds and animals. Visitors can see colourful kingfishers, eagles, cormorants, kites, woodpeckers, sandpipers, curlews, drongos and mynahs on a fairly regular basis.