Ovarian cyst is one of the most common conditions developing in women. Scroll down to read more about this condition.

HAILEY BIEBER recently in her Instagram story opened up about having an ovarian cyst. The model took to her Instagram stories and shared a picture that highlighted her current and past struggles with a condition called 'Ovarian Cyst'.

In her Instagram story, she wrote, "I have a cyst on my ovary the size of an apple, not a baby. I don't have endometriosis or PCOS but I have gotten an ovarian cyst a few times and it's never fun. It's painful and achey and makes me feel nauseous and bloated and crampy and emotional." 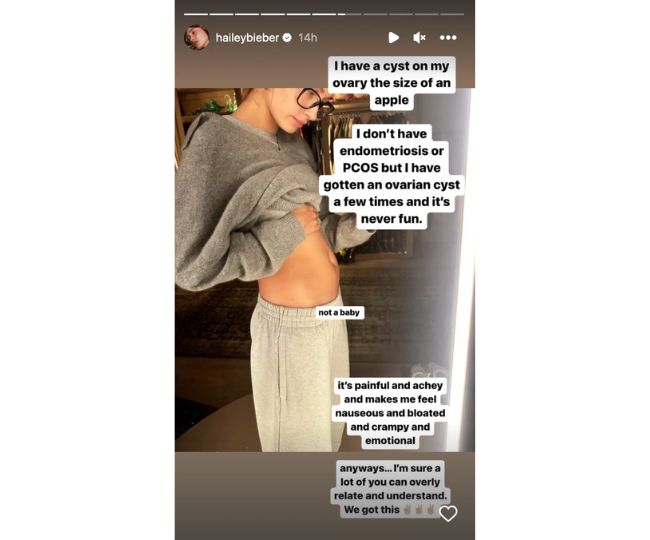 What is Ovarian Cyst?

An ovarian cyst is a sac filled with fluid or semisolid material that forms on or within one or both of your ovaries. According to Healthline, many women will develop one cyst during their lifetime and in most cases, cysts are painless and cause no symptoms.

There are numerous types of ovarian cysts such as dermoid cysts and endometrioma cysts. The most common ovarian cyst is a functional cyst.

They are the most common types of ovarian cysts and develop as a result of ovulation. This type of cyst generally shrinks over time, usually within 60 days. The two types of functional cysts include follicle and corpus luteum cysts.

Follicle Cyst: During the menstrual cycle of a woman, an egg develops in a sac known as a follicle, inside the ovaries. This follicle or sac breaks and releases an egg. However, if this egg or follicle does not break, the fluid inside the follicle forms a cyst on the ovary.

Corpum Luteum Cyst: If the sac or follicle does not dissolve after releasing an egg, additional fluid develops inside the sac and causes the formation of a corpum luteum cyst.

Cystadenomas: This type of cyst develops on the surface of the ovary and is filled with thin and watery mucous-like fluid.

Dermoid Cyst: This type of cyst consists of cells which are made up of types of tissues in the human body.

Endometriomas: These cysts are filled with endometrial tissues which bleed each month during the menstruation cycle.

The most common cause of ovarian cysts include:

Majorly, ovarian cysts do not carry any symptoms, however, as it grows, symptoms start to appear. Some common symptoms include

Whereas some serve symptoms of ovarian cysts include severe pelvic pain, rapid breathing, dizziness or fever.

Women are more likely to develop ovarian cysts if

The treatment of ovarian cysts depends on its sizes and appearance and its symptoms. There are two types of surgeries that are conducted to treat ovarian cysts which include laparoscopy and a laparotomy which are carried out under general anaesthetic.