According to the Google trends, the most searched query remained the ‘encounter pic’ of infamous Gangster.

New Delhi | Jagran News Desk: Infamous gangster Vikas Dubey’s encounter in Uttar Pradesh’s Kanpur has raised the curiosity quotient of Indians quite enormously. In a country obsessed with crime dramas on big and small screens alike, as soon as the news of encounter from Kanpur broke, Vikas Dubey was back on the virtual radar of Indians nationwide, but this time the searched queries were markedly different.

Here is what Indians searched on Google, post the gangster Vikas Dubey’s encounter, who, among his latest acts of gruesome crime against the state, was wanted for the killing of eight policemen of Uttar Pradesh Police since last Friday.

According to the Google trends, the most searched query remained the ‘encounter pic’ of infamous Gangster. Last month, after Sushant Singh Rajput died by suicide, similar searches were made against his dead body’s backdrop as well, with many pictures of SSR that started making rounds on social media. On Friday, ‘Vikas Dubey Encounter Pic’ became the breakout search query on Google.

With over 1950% real time rise, Vikas Dubey Dead Body also remained one among the top searched trends, displaying a degree of voyeurism which remains visible among the Indians in and out of the hinterland. Voyeurism refers to a degree of satisfaction which one gets from viewing other person’s vulnerable moments. 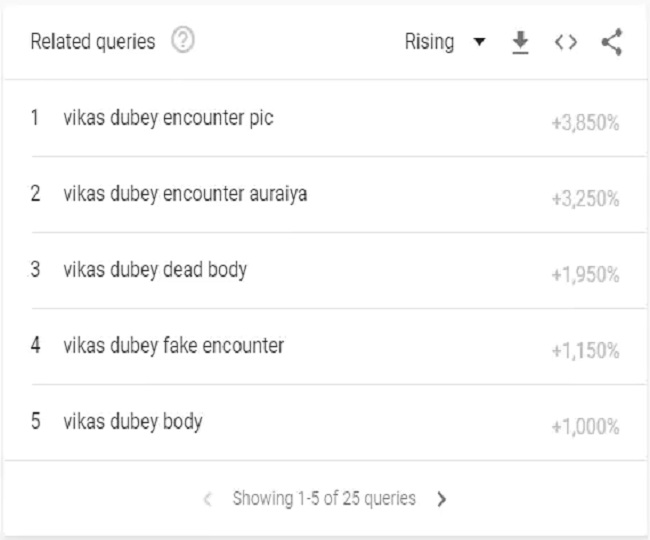 Vikas Dubey’s wife too became the center of virtual curiosities of Indians nationwide with over 1600% rise in its search rate in real time on Google. Such an incredibly rising search query ends up vindicating the Great Indian Obsession with specific nuances of Crimes and Criminals involved. 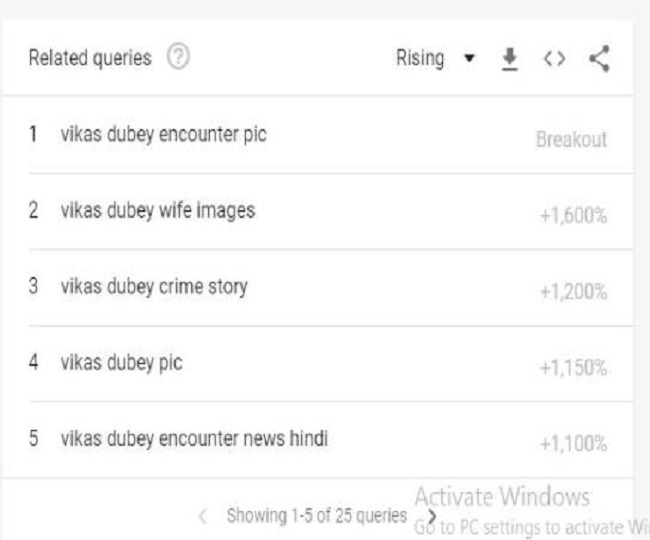 The above search trend marked a 1200% rise in real time on Google. People remained curious about knowing all the ifs and whats related to who Dubey was and what sort of Crimes he did all his life. The explanatory angles related to Vikas Dubey's recent Crime stories post Friday after he and his aides allegedly killed eight men of UP Police, following his escape route till Madhya Pradesh’s Ujjain and dramatic apprehension were also the center of people’s curiosities.

Vikas Dubey was killed in an encounter in Kanpur on Friday morning, after the car carrying him met an accident, and the infamous gangster with limp allegedly tried to flee by snatching the weapon of a police man.