The disturbing video, which has been widely circulated on social media, shows the woman getting purportedly raped and thrashed by five people, including another lady.

New Delhi | Jagran News Desk: In what could once again raise questions over the safety and security of women in India, a bone-chilling video of a young woman, believed to be from the northeast, getting allegedly raped and assaulted has gone viral on social media.

The disturbing video, which has been widely circulated on social media, shows the woman getting purportedly raped and thrashed by five people, including another lady. The five people even stripped the victim n*ked and continued assaulting her in the video.

Jagran English, however, could not independently verify the veracity of the video, along with its time and location.

Though the time or place of the incident is not clear, several reports have claimed that the video is of the Nagaland woman, who committed suicide in Rajasthan's Jodhpur on May 23.

However, both the Rajasthan and Assam Police have clarified that the video is not of the Nagaland woman, whose body was found in Jodhpur. Releasing the screenshots of the viral video, the Assam Police has announced a "handsome reward" against the culprits.

In a series of Tweets, it has said that it cannot be confirmed whether the incident happened in Assam or not, adding that it is "proactively" searching the culprits.

"These images are of 5 culprits who are seen brutally torturing and violating a young girl in a viral video. The time or place of this incident is not clear. Anyone with information regarding this crime or the criminals may please contact us. They will be rewarded handsomely," the Assam Police tweeted while sharing the screenshots of the video.

"We must stand together to bring the perpetrators of this heinous crime to justice," it added. 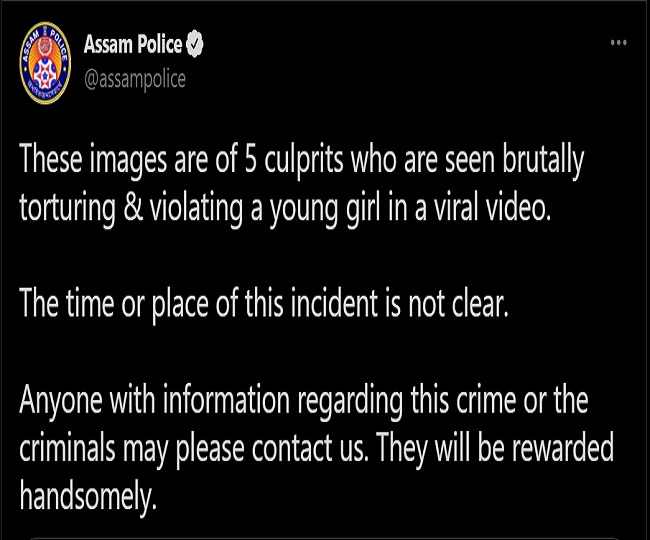 Meanwhile, Union Minister Kiren Rijiju also issued a similar statement, adding that he has directed the authorities to take all necessary action against the culprits for this heinous crime.

"The viral video of a girl from North-East being brutally raped and tortured by 4 men and 1 woman is not related to Jodhpur suicide case. I had a detailed discussion with the Police Commissioner of Jodhpur. However, there must be all-out efforts by all State Police to catch the devils," he tweeted.