Uttarakhand Flood LIVE Updates: At least 7 people were killed, while 120 others remain missing after a glacier broke off at Joshimath in Uttarakhand's Chamoli district, triggering massive floods in the region.

New Delhi | Jagran News Desk: At least 7 people were killed while 120 others remain missing after a glacier broke off at Joshimath in Uttarakhand's Chamoli district, triggering massive floods in the region. Following the incident, a flood alert was  issued for Shrinagar, Haridwar and Rishikesh and hundreds of Indo-Tibetan Border Police (ITBP) personnel, National Disaster Response Force (NDRF) and state police officials have been deployed in the affected areas.

Prime Minister Narendra Modi has announced an ex-gratia of Rs 2 lakh for the kin of those who lost their lives in the flash floods. The US State Department has expressed its 'deepest condolences' to those affected by the incident

22:00: The US State Department has expressed deepest condolences to those affected by the glacier burst and landslides in India.

21:00: ITBP PRO Vivek Pandey has said that the force will be carrying out a night operation at a tunnel in Chamoli where 30 people are believed to be trapped

20:03: Prime Minister Narendra Modi has announced an ex-gratia of Rs 2 lakh each for the next of kin of those who have lost their lives in flash floods.

19:13: DRDO officials have said that its team of snow and avalanche experts from its newly created Defence Geo-Informatic Research Establishment would be reaching tomorrow to assess situation at site in Uttarakhand where flash floods occurred.

18:35: Uttarakhand Chief Minister Trivendra Singh Rawat has announced financial assistance of Rs 4 lakh each to the kin of the deceased

17:57 pm: Congress President Sonia Gandhi has called the news of glacier break in Uttarakhand disturbing and said that she is praying for the safety of those injured in the incident.

"The Indian National Congress stands with the people of Uttarakhand in this hour of tragedy and crisis," she said.

17:56 pm: The National Crisis Management Committee (NCMC) under the chairmanship of Cabinet Secretary, Rajiv Gauba met today to review the situation arising out of the natural disaster in Uttarakhand caused by glacial burst, reports ANI.

Cabinet Secretary directed concerned agencies to work in close co-ordination and extend all requisite assistance to the State administration. He emphasized the need to account for all missing persons and ensure that those trapped in the tunnel are rescued at the earliest, it said.

17:55 pm: Also Read -- Chamoli Glacial Burst: A look at 5 major disasters that wrecked havoc in Uttarakhand, Himachal in recent past

#UPDATE: ITBP rescues all 16 people who were trapped in the tunnel near Tapovan, Chamoli. #Uttarakhand https://t.co/vi2ZbTyB9N

16:08 pm: ITBP DG SS Deswal has said that an under constructed tunnel near Tapovan dam in Uttarakhand where around 20 workers are stranded, adding that a rescue operation is underway there.

"It is suspected that around 100 workers were at the site. Of which, 9-10 dead bodies have been recovered from the river. Search operation underway. 250 ITBP personnel are present at site, Indian Army team to reach soon," he was quoted by news agency ANI as saying.

15:53 pm: Deeply worried about the glacier burst near Joshimath, Uttarakhand, that caused destruction in the region. Praying for well being and safety of people. Am confident that rescue and relief operations on ground are progressing well, says President Ram Nath Kovind.

15:53 pm: We are gathering details on the flash flood in Uttarakhand's Chamoli. Our officials are in contact with authorities there. As it concerns Ganga river, we need to remain alert, says Bihar Chief Minister Nitish Kumar.

15:28 pm: Uttarakhand DGP Ashok Kumar has said that 16 people who were trapped in Tapovan Dam are being shifted to safer places by state police. 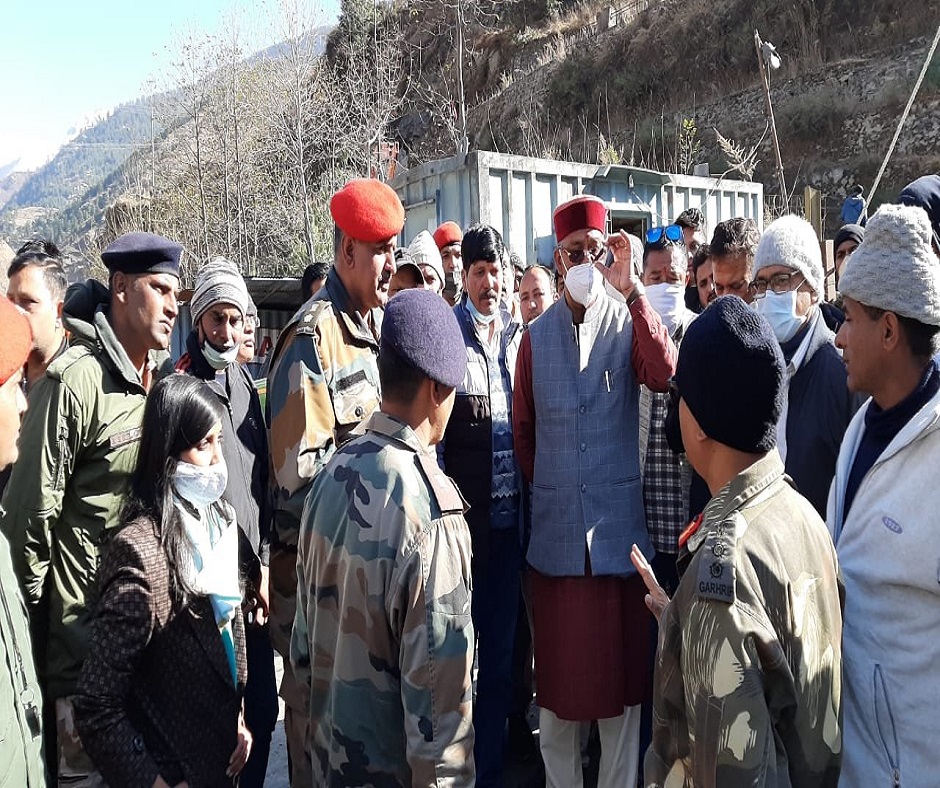 14:58 pm: BREAKING: The ITBP has said that three bodies have been recovered from the NTPC site in Tapovan area of Chamoli.

14:27 pm: Uttarakhand Chief Secretary Om Prakash says "casualties are feared to be between 100 to 150. Teams of ITBP, SDRF and NDRF have already reached the spot. Red alert has been issued".

14:26 pm: The Indian Army has said that it is moving its six columns towards the flood-affected areas of Uttarakhand.

"Indian Army has deployed choppers and troops for supporting Uttarakhand government and NDRF to tackle the flood. Military station near Rishikesh actively involved in coordination of rescue and relief operations with local administration. Army headquarters monitoring the situation," the Army said.

#WATCH | 3 NDRF teams have reached there. More teams are ready to be airlifted to Uttarakhand from Delhi. ITBP jawans are also there. I assure people of Uttarakhand that Modi govt stands with them in this difficult time. All help will be extended: HM Amit Shah pic.twitter.com/lYxOhr8T2Y

14:16 pm: While speaking to news agency ANI, ITBP Spokesperson Vivek Pandey said that more than 200 jawans are on the job and working in collaboration with local administration.

"One team is on the spot to assess the situation. Another team is deployed near Joshimath to raise awareness and evacuate people. The situation is under control," he said.

14:15 pm: Just In: A meeting is scheduled at Cabinet Secretariat on relief operations in Uttarakhand's Chamoli. DGs and Home Ministry officials to join the meeting, reports ANI.

14:14 pm: Union Finance Minister Nirmala Sitharaman has also expressed her grief over the incident and said that the Centre will provide all the necessary assistance to the state.

"Home Minister has assured that every help the Uttarakhand government would need will be extended," she said.

14:00 pm: The Indian Air Force has said that three choppers -- two Mi-17 and one ALH Dhruv chopper -- have been deployed for rescue operations in flood-affected areas.

More aircraft will be deployed as per the requirement on ground, the IAF said.

13:56 pm: PM Modi has taken a stock of the situation in Uttarakhand and has directed the officials to provide assistance to those in need.

"India stands with Uttarakhand and the nation prays for everyone’s safety there. Have been continuously speaking to senior authorities and getting updates on NDRF deployment, rescue work and relief operations ," he says.

13:49 pm: Water flow in Alaknanda river has become normal past Nandprayag. Water level of the river is now 1 meter above normal but flow is decreasing. Chief Secretary, Disaster Secretary, Police officials and my all teams are monitoring the situation in disaster control room, says Uttarakhand CM TS Rawat

13:34 pm: Amit Shah has said that more NDRF teams are being airlifted to Uttarakhand from Delhi and the central government is constantly monitoring the situation.

Regarding the natural disaster in Uttarakhand, I've spoken to CM TS Rawat, DGs of ITBP and NDRF. All officers concerned are working on a war footing to rescue people. NDRF teams have left for rescue operations. Every possible help will be provided to Devbhoomi, Shah said.

13:38 pm: The state government has also issued a flood alert for Haridwar, Shrinagar and Rishikesh.

"Representatives of the power project have told me that they are not being able to contact around 150 of their workmen at the project site," news agency PTI quoted Aggarwal as saying.

13:36 pm: Union Home Minister Amit Shah and Minister of State for Home Ministry Nityanand Rai have taken a stock of the situation and directed the officials to provide immediate assiatance to those in need.

Expressing concerns over the incident, Uttarakhand Chief Minister Trivendra Singh Rawat has asked people to not pay attention to any kind of rumours, saying the state government is taking all the necessary steps.

"People are being evacuated from the areas near Alaknanda. As a precautionary measure, the flow of Bhagirathi River has been stopped. To prevent the flow of water of Alaknanda, Srinagar Dam and Rishikesh Dam have been emptied. SDRF is on alert. I am leaving for the spot," Rawat was quoted by news agency ANI as saying.

Meanwhile, the Yogi Adityanath-led BJP government in Uttar Pradesh has issued an alert to all district magistrates, asking them to continuously monitor the water level of river Ganga.

"If required, people need to be evacuated and taken to a safe place. NDRF, SDRF and PAC Flood Company are been given instructions to be on highest alert," the UP government said in a statement.