Top 10 countries with highest per capita health and military expenditure; India is not in the list

According to the Stockholm International Peace Research Institute, Israel's per capita military expenditure is the highest in the world, followed by the second-placed United States.

New Delhi | Jagran News Desk: The world is grappling with the deadly coronavirus pandemic which has killed more than 6 lakh people and infected over 16 million across the world. This is the worst health emergency in more than 100 years. At the same time, bilateral ties between several countries have also restrained, which can lead to military conflicts. The most recent example is India and China. Both countries came face to face on the border leading to the death of 20 Indian soldiers. In such times, the governments across the world set their priorities - for some, it is the health and for others, it is military - and spend money accordingly.

Countries with the highest per capita health expenditure:

America is the most affected country in the world due to the coronavirus epidemic. However, America is also the country that spends the most on the health of its citizens. According to data from the Organization for Economic Co-operation and Development (OECD), in 2018, the US per capita health expenditure stood at USD 9,008 per capita. This was 1.5 times higher than second-placed Norway, which spends USD 5,361 per person on people's health.

European countries Germany, Switzerland and Sweden are placed third, fourth and fifth, respectively, in the per capita health expenditure. Moreover, this does not include personal insurance and out-of-pocket expenses. 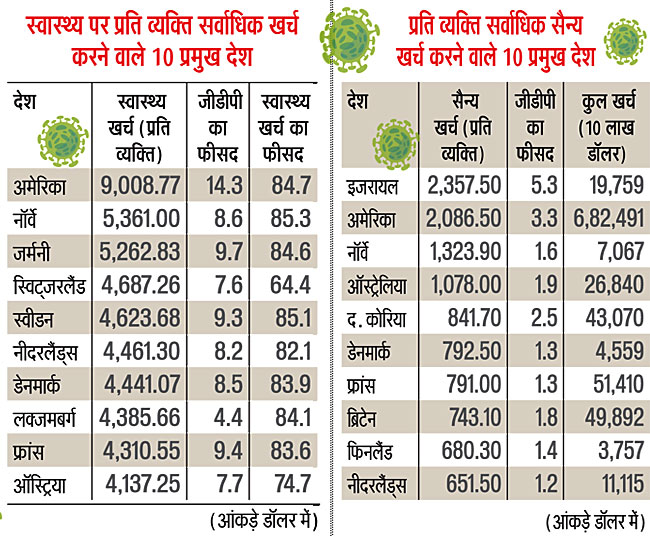 Countries with the highest per capita military expenditure

Norway ranks third on the list of countries with the highest per capita military spending. In the fourth and fifth places are Australia and South Korea, respectively. India is not in the top 10 list of any of the above two categories.