New Delhi | Jagran News Desk: Another video has emerged on the social media from the violence that took place between the Police and Lawyers at the Tis Hazari court complex, in which Deputy Commissioner of Police (DCP), North District, Monika Bhardwaj can be seen chased by a mob of lawyers when she tried to stop the ruckus created by the lawyers after the scuffle broke out over parking.

In the video, DCP Bhardwaj was facing a hard situation, after a group of lawyers charged at her. She can be seen pleading to the lawyers with folded hands to stop the violence, but the lawyers overpowered her. She was saved by some policemen who helped her manage to escape the spot.

#WATCH: CCTV footage of DCP North Monika Bhardwaj pleading before the lawyers to stop violence when a clash broke out between police and lawyers at Tis Hazari Court in #Delhi on November 2. pic.twitter.com/xFWZBP3Swp

Her Personal Security Officer was also present at the spot. While he tried to save her in the process, lawyers reportedly tried to snatch his service revolver.

An audio tape was also doing rounds on social media along with the video, wherein, an injured constable said that DCP Bhardwaj was in a bad shape and was abused by the lawyers’ group. If they don’t escape the spot in time, the mob could have lynched her and the staff because they were outnumbered by the lawyers.

#WATCH: CCTV footage of DCP North Monika Bhardwaj being roughed up on 2nd November when a clash between police and lawyers took place at Tis Hazari Court, in #Delhi pic.twitter.com/d3sCMWTBl9

Several videos and CCTV footage have been found from the court complex and nearby areas that showed the violence.

The SIT formed after an FIR was registered is now examining all the CCTV footage from the court complex following the violent clash between the two groups. A senior police officer as quoted by India Today said that appropriate legal action will be taken against the culprits after thorough investigations and strict punishment will be given to the miscreants.

Following the clashes and attack on DCP Monika Bhardwaj, the National Commission for Women (NCW) took a ‘suo moto cognizance’ in the matter on Friday. NCW Chief Rekha Bhardwaj wrote a letter to Delhi Police Commissioner Amulya Patnaik and Bar Council of India Chairman Manan Kumar Mishra asking for an inquiry against those involved in the brutality with the woman officer. Rekha Sharma cited the video footage of the incident and shared her concern. 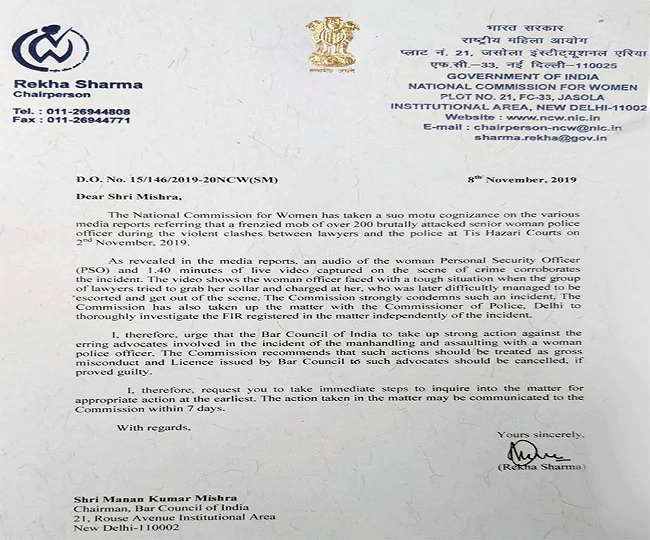 Two IPS officers were also transferred on Thursday on the Delhi High Court's direction in the aftermath of the court complex clashes.

Day after the violent clash took place on Saturday, the Delhi Police personnel stationed at the Tis Hazari court complex called of their duty. The face-off resulted in the abstinence of the security personnel at the entry gates and the corridors of the court.

On November 2, a dispute between an on-duty policeman and lawyer over parking triggered the scuffle, leading to violence in which 20 police personnel and several lawyers were injured.