Earlier in the morning, the NCB team conducted searches at the residence of actress Rhea Chakraborty, the prime accused in the high-profile case to probe the drug angle in the case.

Mumbai | Jagran News Desk: The Narcotics Control Bureau (NCB) on Friday summoned Sushant Singh Rajput's former manager Samuel Miranda and Rhea Chakraborty's brother Showik in the death case of the late actor. The central probe agency has also detained Miranda under the provisions of Narcotic Drugs and Psychotropic Substances Act, 1985 and he has brought to the NCB's office in Mumbai.

Earlier in the morning, the NCB team conducted searches at the residence of actress Rhea Chakraborty, the prime accused in the high-profile case to probe the drug angle in the case. Apart from Rhea, the NCB, which has arrested 5 people in the drugs angle in Sushant Singh Rajput case, also conducted searches at the residence of Samuel Miranda who was the former manager of Rajput.

"It's just a procedural matter. That is what we are following. It is being done at Rhea's and Samuel Miranda's house," news agency ANI quoted an NCB official as saying.

15:44 pm: Mumbai Police is compared to Scotland Yard. Some people are trying to target Mumbai Police. An IPS officer has gone to court against this...After, her (Kangana Ranaut) comparison of Mumbai Police...she has no right to live in Maharashtra or Mumbai, says state minister Anil Deshmukh

15:18 pm: You (actor Kangna Ranaut) are trying to insult Maharashtra. There must be any political party or power centre which is supporting her that is why she is speaking like this. A conspiracy is being hatched to malign the image of Mumbai and Mumbai Police: Shiv Sena MP Sanjay Raut

12:30 pm: Sushant Singh Rajput had no trouble till 2019. After Rhea Chakraborty came in his life, he used to be restless which the family perceived as anxiety & provided help but the family had no knowledge that he had bipolar disorder or depression: Vikas Singh, lawyer of Rajput's famil

11:50 am: Searches were conducted at Samuel Miranda & Showik Chakraborty's places in Mumbai. Senior officers were present during the searches. Both have been issued notices under section 67 of the NDPS Act, to join the investigation: Mutha Ashok Jain, Deputy DG, South-Western Region, NCB

11:41 am: Rhea's brother Showik brought to NCB office in Mumbai 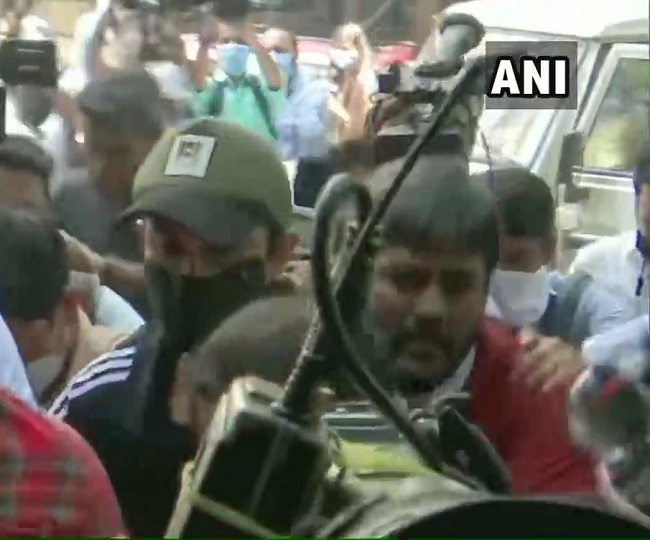 11:15 am: According to officials, the ED in its search found that the mobile phone chats and messages indicated procurement, transportation and consumption of drugs

11:00 am: The central probe agency had registered an FIR in the sensational case under the Narcotic Drugs and Psychotropic Substances (NDPS) Act after the Enforcement Directorate (ED) shared with it a report following the cloning of two mobile phones of Rhea

10:52 am: According to a report by Republic TV, Miranda and Showik will be jointly questioned by the NCB today

10:51 am: The NCB has issued a summon against Miranda and Rhea's brother Showik

10:46 am: Sushant's former manager Samuel Miranda has been brought at the office of the NCB for questioning