Shashi Tharoor on Thursday tweeted informing about the death of former Lok Sabha Speaker Sumitra Mahajan only to delete it after some time.

New Delhi | Jagran News Desk: Congress leader Shashi Tharoor on Thursday tweeted informing about the demise of former Lok Sabha Speaker Sumitra Mahajan only to delete it after some time, finding that the 78-year-old was doing well. Later, in another tweet, Tharoor said he was relieved to hear that Mahajan was fine, adding that he had received the news from a "reliable source".

The fresh tweet from Tharoor came after a journalist from a leading Hindi news channel reported that Mahajan was doing well at Indore's Bombay Hospital. 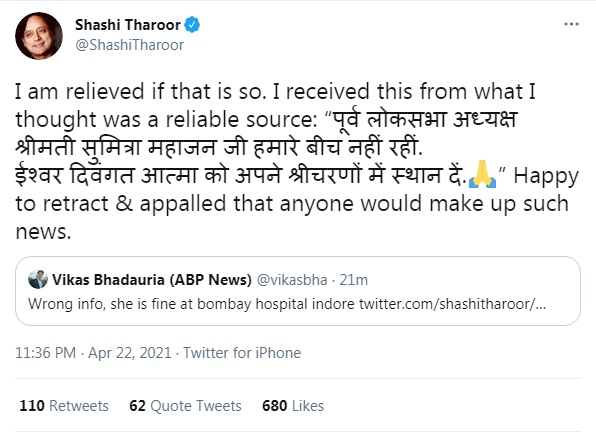 "Thanks @kailashOnline. I have deleted my tweet. I wonder what motivates people to invent and spread such evil news that takes in people. My best wishes for Sumitra ji’s health and long life," the Congress MP replied to Vijayvargiya. 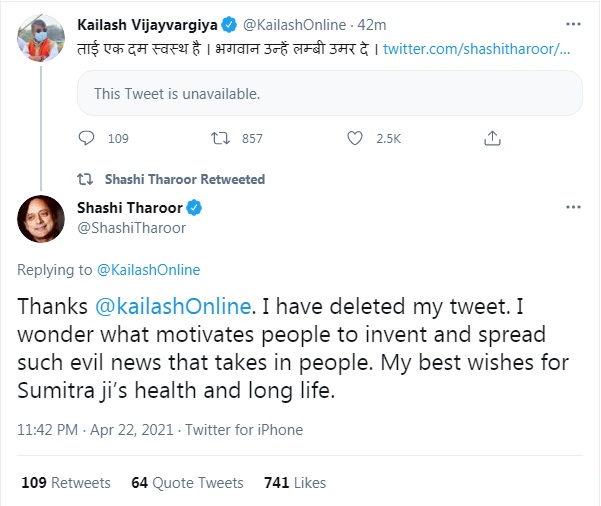 Here is a screenshot of the tweet posted by Tharoor earlier, in which he wrongly informed about the demise of Mahajan:

"Saddened to learn of the passing of former LokSabha Speaker Sumitra Mahajan. I remember many positive interactions with her, including when she & the late Sushma Swaraj asked me to lead a Parliamentary delegation to BRICS in Moscow. My condolences to her family &prayers: OmShanti!" Tharoor tweeted.

Mahajan was admitted to Bombay Hospital on Thursday after reportedly suffering from mild fever. She had tested negative for COVID-19.

Mahajan, who celebrated her 78th birthday on April 12, is one of the senior-most member of the Parliament. Conferred with India's third highest civilian award Padma Bhushan, she is the second woman after Meira Kumar to be elected as the Speaker of the Lok Sabha.

She represented the Indore constituency of Madhya Pradesh from 1989 to 2019 and was the longest serving woman MP. She also served for as a Union Minister of State from 1999 to 2004, holding the portfolios for Human Resource Development, Communications and Information Technology and Petroleum and Natural Gas.

Beginning her political life at the age of 39, Mahajan became the deputy mayor and subsequently a Member of Parliament from Indore in Madhya Pradesh. She has won eight consecutive elections in the Indore constituency.

(Note: We regret the publishing of this news based on parliamentarian Shashi Tharoor's tweet concerning Sumitra Mahajan's health. The story was updated based on the retraction of the tweet and the subsequent clarification by the Congress leader.)