'Stop beating around the bush, comply with law of land': Centre's stern message to Twitter amid row over IT rules

The strong remarks from the government came after Twitter expressed concern over the "potential threat to freedom of expression" and intimidation tactics by the police.

New Delhi | Jagran News Desk: The Centre on Friday vehemently rejected the allegations of 'intimidation tactics' by Twitter as "false and baseless" and said that the microblogging website was "attempting terms to dictate world's largest democracy".

The strong remarks from the government came after Twitter expressed concern over the "potential threat to freedom of expression" and intimidation tactics by the police. The company said it will "strive" to comply with applicable law in India to keep its service available in the country but will "advocate for changes to elements of these regulations that inhibit free, open public conversation."

"Twitter’s statement is an attempt to dictate its terms to the world’s largest democracy. Through its actions and deliberate defiance, Twitter seeks to undermine India’s legal system. Furthermore, Twitter refuses to comply with those very regulations in the Intermediary Guidelines on the basis of which it is claiming a safe harbour protection from any criminal liability in India," the Ministry of Electronic and IT said in its statement.

"Twitter needs to stop beating around the bush and comply with the laws of the land. Law making and policy formulations is the sole prerogative of the sovereign and Twitter is just a social media platform and it has no locus in dictating what India's legal policy framework should be," it said. 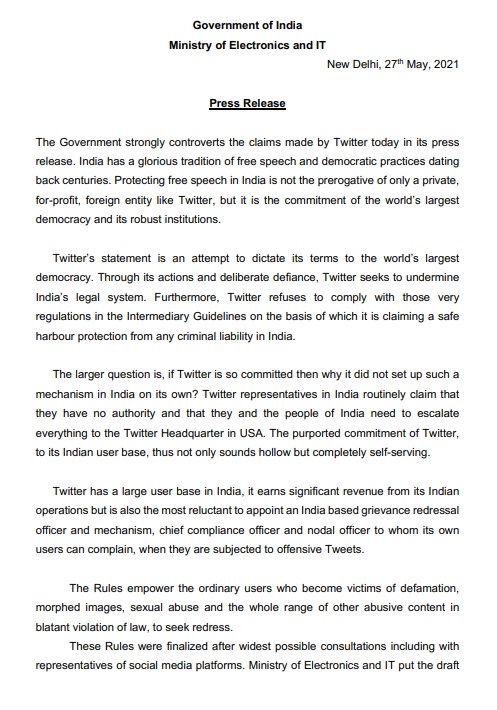 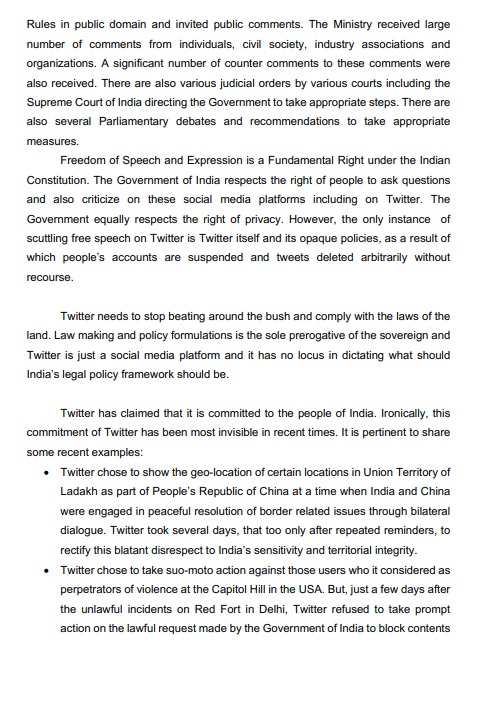 On Twitter expressing concern over the safety of its employees in India following the raids by Delhi Police at its offices, the government said it wished to "emphatically assure that representatives of social media companies including Twitter are and will always remain safe in India and there is no threat to their personal safety and security."

Twitter had marked several tweets by ruling BJP leaders on alleged strategy document of opposition to target the government over COVID as containing 'manipulated media', which prompted the police to visit its offices late on Monday. Opposition Congress has disputed the document, calling it fake.

In its first official statement after the Delhi Police visited the company's offices in Delhi and in Gurugram to serve notice to its country managing director about an investigation into the 'manipulated media' tag, Twitter said it will continue to be strictly guided by principles of transparency and protecting freedom of expression.

In the new digital rules, social media companies like Facebook, WhatsApp and Twitter have been asked to identify within 36 hours the origin of a flagged message as well as conduct additional due diligence, including the appointment of a chief compliance officer, nodal contact person and resident grievance officer.