Shripad Naik Accident: The car met with an accident near a village in Ankola Taluk of Uttara Kannada district when they were travelling from Yellapur to Gokarna.

New Delhi | Jagran News Desk: Shripad Naik's wife and personal secretary were killed while the Union minister was left injured after their car met with an accident in Uttar Kannada district of Karnataka on Monday. While Naik's wife Vijaya and secretary Deepak died on the spot, the minister was rushed to Goa Medical College for treatment where he is said to be stable.

The car met with an accident near a village in Ankola Taluk of Uttara Kannada district when they were travelling from Yellapur to Gokarna. The Union Minister of state for AYUSH (independent charge) and MoS for Defence is said to be out of danger.

Police said Naik, along with his wife, personal assistant Deepak, his close confidante Sai Kiran, gunman and the driver were heading from Yallapur to Gokarna on Monday night. On the way, the driver lost his control over the car near Hosakambi village in Ankola Taluk of Uttara Kannada and the vehicle overturned.

"It was not a collision between vehicles. Prima facie it appears to be the case of the driver losing control of the car" a police officer told PTI.

Prime Minister Narendra Modi has spoken to Goa Chief Minister Pramod Sawant to ensure proper arrangements for the treatment of in Goa.

Karnataka Chief Minister B S Yediyurappa condoled the death of the Union minister's wife. My heartfelt condolences on the tragic death of Smt Naik and prayers for the speedy recovery of Shri Naik and those injured," Yediyurappa tweeted.

"Shocked to hear Hon Union Minister @shripadynaik has met with an accident near Ankola and his wife who was travelling with him has tragically died. My deepest condolences to their family and friends. Praying for speedy recovery of Shripadji and hope he will be out of danger soon," Karnataka revenue minister RV Deshpande tweeted. 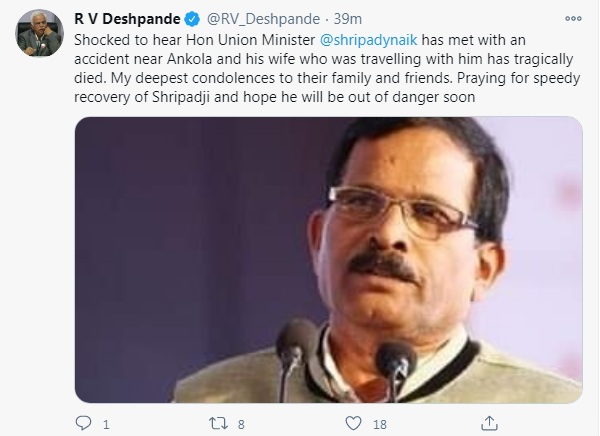 Delhi Chief Minister Arvind Kejriwal tweeted his condolences on Naik's wife Vijaya's death. "Deeply saddened to hear the news of Vijaya Naik ji's death in an accident. Praying for the quick recovery of Hon'ble Union Minister Shripad Naik ji, hope God gives him & his family the strength to overcome this loss," he tweeted.

Meanwhile, Defence Minister Rajnath Singh also spoke to Goa CM asked him to ensure best treatment for the minister, and fly him to Delhi if need arises.